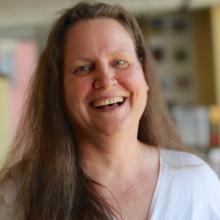 Laura Lee has been with WRI since 1986, holding positions of growing responsibility. In 1996, she created WRI's first website which she continued building and revising, earning WRI a Webby Award nomination in 2003. She continues to raise WRI's bar of excellence by building an active online community, leveraging online tools and resources, providing strategic communication advice, and analyzing and communicating online success to staff.

Laura Lee began working with multimedia communications technologies in the early 1980s, first as a journalist then moving into radio and television, and finally into the online space. Prior to joining WRI, she worked in the telecommunications law firm of Fly, Shuebruk, Gaguine, Boros, Schulkind and Braun (Washington, DC; 1983-86), at WKPS-FM and cable-TV station WWNW, New Wilmington, PA (1979-1983), and as assistant to Pennsylvania State Legislator Al Rasco (Pittsburgh, PA; 1978). Prior to that, she was an editor/writer for a local newspaper.

Laura Lee attended Westminster College with a music scholarship (viola) and graduated with a degree in telecommunications and minors in art and religion. Originally from Pittsburgh, Pennsylvania, she now lives in Arlington, Virginia with her husband and two dogs. She has two married sons and one granddaughter. A fan-girl by nature, her interests include art (and crafts), music and the cinema - especially documentaries and Bollywood films as well as Korean/Chinese/Japanese/Thai dramas, film and anime as well as classical, kpop, soundtracks, and world music. She has a working knowledge of Spanish and German, conversational Hindi, and a bit of Korean.

You can connect with Laura Lee on Twitter, LinkedIn, and a variety of other social networks.