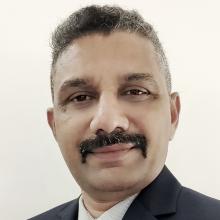 Jayahari KM (Hari) is India Country Coordinator, Food and Land Use Coalition (FOLU), a program co-led by World Resources Insitute India. His primary responsibility is to coordinate FOLU India activities and work closely with FOLU India core partners and collaborations. He is one among the WRI India Directors who is leading FOLU programme.

In his career, Hari has worked in different capacities in institutions like Kerala Forest Research Institute, WWF India, Winrock International India till 2015, focusing on Natural Resource Management and Biodiversity Conservation. He has initiated and implemented many conservation programs primarily in Western Ghats and Eastern Himalayas. From 2015-17 he led Sahjeevan, an NGO working in pastoral and dry-land agriculture sectors, as an Executive Director. Prior to his current role at World Resources Insitute India, he played an instrumental role in building spatial databases in India, like India Observatory (www.indiaobservatory.org.in) at the Foundation of Ecological Security, and Restoration Opportunity Atlas of India (india.restorationatlas.org) at World Resources Insitute India. He also provided consultancy services to national and international organizations like Tetra Tech, ICLEI South Asia, etc.