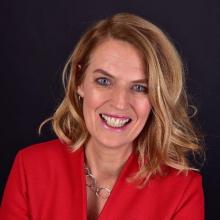 Janneke de Vries is ​Director of European Partnerships and Head of the Europe regional office in The Hague. She works to deepen WRI's European presence and increase visibility and impact. She expands WRI's network of partners and funders in Europe, and initiates partnerships with new prospective European partners. She also supports WRI Europe Director to ensure effective management and oversight of WRI Europe office.

Janneke holds a Master of Law in public international law and international commercial law from the University of Groningen in the Netherlands. She had an executive education in international management and public leadership at the Harvard Kennedy Business School.

​She taught water management and city planning at the Johns Hopkins University in Washington DC.

Janneke lives near The Hague in the Netherlands with her kids Silke and Cas. Her passion is sailing, at inland waters but also at sea.