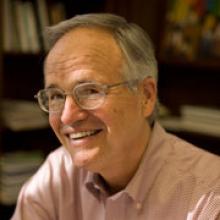 James Gustave Speth is Professor of Law at the Vermont Law School and a senior fellow at Demos, the Democracy Collaborative, and the Tellus Institute. He served as Dean of the Yale School of Forestry and Environmental Studies from 1999 to 2009. From 1993 to 1999, Dean Speth was Administrator of the United Nations Development Programme and chair of the UN Development Group. Prior to his service at the UN, he was founder and president of the World Resources Institute; professor of law at Georgetown University; chairman of the U.S. Council on Environmental Quality; and senior attorney and cofounder, Natural Resources Defense Council.

Throughout his career, Dean Speth has provided leadership and entrepreneurial initiatives to many task forces and committees whose roles have been to combat environmental degradation, including the President’s Task Force on Global Resources and Environment; the Western Hemisphere Dialogue on Environment and Development; and the National Commission on the Environment. Among his awards are the National Wildlife Federation’s Resources Defense Award, the Natural Resources Council of America’s Barbara Swain Award of Honor, a 1997 Special Recognition Award from the Society for International Development, Lifetime Achievement Awards from the Environmental Law Institute and the League of Conservation Voters, and the Blue Planet Prize. He holds honorary degrees from Clark University, the College of the Atlantic, the Vermont Law School, Middlebury College, the University of South Carolina, Unity College, and the University of Massachusetts/Boston. Publications include America the Possible: Manifesto for the New Economy, The Bridge at the Edge of the World: Capitalism, the Environment, and Crossing from Crisis to Sustainability, Global Environmental Governance, and Red Sky at Morning: America and the Crisis of the Global Environment. His most recent book is a memoir, Angels by the River, available in October 2014.