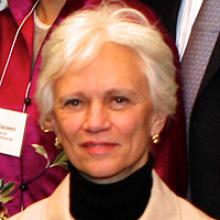 Harriet C. Babbitt (Hattie) serves as co-chair of The Global Water Challenge (GWC), as vice chair of The National Democratic Institute (NDI), and as vice chair-emerita of The World Resources Institute (WRI). She served as the chair of the board of Population Action International (PAI) and as a member of the board of The Water Initiative (TWI). She is a member of the Council on Foreign Relations.

Ambassador Babbitt served in the US Department of State as Ambassador and US Permanent Representative to the Organization of American States from 1993-1997. She served as Deputy Administrator of the US Agency for International Development (USAID) from 1997-2001. Babbitt also served as a Senior Public Policy Scholar at the Woodrow Wilson International Center for Scholars and spent 20 plus years as a practicing attorney.