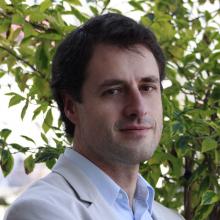 Gorka is an Urban Development Coordinator at WRI Mexico. His focus areas include the analysis of the urban development model in Mexico and its relation to national and local public policies. He also collaborates on the development of proposals for the public space.

Gorka was previously an architect working on several social housing, urban equipment and public space projects. He also worked in the Land Registry and Territorial Register of the Ministry of Finance of Mexico City, designing statistical models of urban land valuation, and conducting analysis on urban housing markets. He also teaches Urbanism and Urban Design courses at the Universidad Anáhuac México.

Gorka holds an Architecture degree from the Higher Technical School of Architecture at the University of Seville, Spain, and holds a Master's degree in Urban Studies from the College of Mexico, Mexico.

Gorka is a mild supporter of the Real Sociedad, but his support grows stronger against Real Madrid, Barcelona or Atlético de Madrid fans.