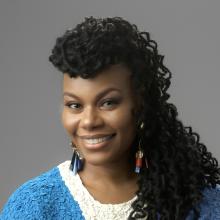 Described as one of the country’s most exciting “next generation” political leaders, Gloria Walton is committed to building equitable solutions that move all of us forward. Gloria is an award-winning organizer, writer, and President & CEO of The Solutions Project. She joined the organization from Strategic Concepts in Organizing and Policy Education (SCOPE), a South LA-based community organization developing cutting-edge strategies to ensure that Black and Brown, poor and working-class communities have an equal voice in the democratic process, where she was President & CEO for 10 years. Under Gloria’s leadership, SCOPE played a pivotal role in several significant ballot measures and policy campaigns that increased community decision-making and ensured equitable investment in green jobs, climate solutions, and critical public services.

In her first few months with The Solutions Project, Gloria negotiated a $43 million unrestricted grant from the Bezos Earth Fund, gave a TIME100 talk alongside co-founder Mark Ruffalo, and was named "New President to Watch" and one of the “100 Power Players in Philanthropy” by Inside Philanthropy. She also helped launch the first-ever Women’s Climate Week and first-ever Black Climate Week.

Gloria has won half a dozen awards for her leadership, including NAACP-LA’s Empowerment Award, the LA League of Conservation Voters Environmental Justice Champion Award, and the Black Women Green Future Award. In 2020, she was also named a Grist 50 Fixer, recipient of the South Coast Air Quality Management District’s Environmental Justice for All Award, and a Fellow of the 2020 class of the Civil Society Fellowship, a project of The Aspen Institute, and a member of the Aspen Global Leadership Network. She holds seats on the Governor's Office of Planning and Research Integrated Climate Adaptation and Resiliency Program Technical Advisory Council, serves on the Board of Directors of California Calls, and is a Founding Coordinating Committee member of the Black Worker Center, a Founding Advisory Board member of BOLD (Black Organizing for Leadership & Dignity), and Advisory Board member of Aclima.

In addition to her leadership and community organizing work, Gloria is also a writer, commentator, and public speaker. Her work and words have appeared at TIME, CBS This Morning, The Nation, HuffPost, The Center for American Progress, The Hill and others, writing about topics ranging from environmental racism and clean energy jobs, to voter engagement and racial justice. She also speaks nationally, and has shared words on stage with luminaries like former EPA Administrator Gina McCarthy, 2020 Democratic presidential candidate Tom Steyer, TEDWomen curator Pat Mitchell and actor Don Cheadle.