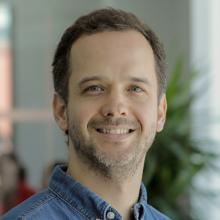 Flavio Galvao is a Video Specialist. He works to expand WRI's presence by creating video content.

Prior to joining WRI, Flavio worked as a motion designer, animator and copywriter. He held an apprenticeship program at The Duke and The Duck, a story-driven animation studio; and participated in some freelance projects at DDC Public Affairs. He also worked as a copywriter at several communications groups and independent advertising agencies based in Brazil such as Havas, Isobar, Monumenta, Artplan, Propeg and Fischer.

Flavio holds a degree in Advertising from Federal University of Pernambuco (Brazil), and a MBA in marketing from Getulio Vargas Foundation (Brazil). Also, he attended courses at New York Film Academy, School of Visual Arts, General Assembly, School of Motion, and Animation Mentor.

Flavio lives in Arlington, VA with his wife Adriana, and some plants.