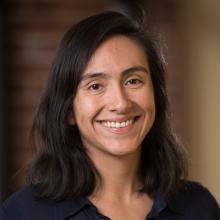 Estefanía Ardila’s primary role in the NDC Partnership Support Unit is assisting governments in the LAC region in identifying their needs and mobilizing support to translate their climate and sustainable development goals into actions.

Prior to joining the Support Unit, Estefanía worked for six years as a public servant in Colombia. She provided technical advisory in the establishment of Colombia’s results-based payments mechanisms to combat deforestation and helped leading key planning and policy making processes from the Minister’s and Deputy Minister’s office. She also worked as an advisor to Colombia’s Forest and Carbon Monitoring System and was engaged in the international reporting and technical analysis process for developing countries under the United Nations Framework Convention on Climate Change.