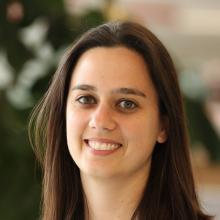 Debbie Karpay Weyl is the Deputy Director for WRI U.S.

She previously served as Manager for the Buildings Initiative at WRI Ross Center for Sustainable Cities. She led an expanding global partnership to accelerate building energy efficiency in cities around the world. She also contributed to program management and development, research, and knowledge exchange for urban energy efficiency and sustainability.

Debbie joined WRI from CLASP, a global non-profit organization that improves the environmental and energy performance of appliances, lighting and equipment. From 2011-2016 Debbie managed and developed global programs, led research projects, and facilitated collaboration among international experts and other representatives in the public, private, and non-profit sectors.

Prior to joining CLASP, Debbie worked at the U.S. Department of Energy, Office of Energy Efficiency and Renewable Energy, where she was a contractor supporting building efficiency and other energy efficiency programs in the United States.

Debbie holds a Master of Science in Environment and Development from the London School of Economics and Political Science, and a B.A. in Politics (Political Economy and International Relations) from Princeton University. She grew up in Potomac, MD and lives with her husband in Washington, DC.