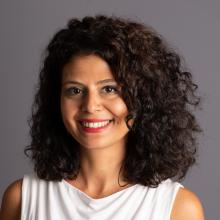 Cigdem Cörek Öztaş is the Urban Development & Accessibility Manager at WRI Türkiye Sustainable Cities and joined in October 2013. Previously, she worked as a project assistant on a TUBITAK (The Scientific and Technological Research Council of Turkey) project called, "Industrial Clusters in Metropolitan Areas: Jewellery Clusters, Competitiveness and Social Networks in İstanbul." For about 4 years, she worked as an expert at the West Black Sea Development Agency, in the Strategy Development and Programming Unit. The design team she was a part of was recognized in the 2008 Kahramanmaras Cultural Park Architectural Design Competition and in the Terminal Complex Urban Design and Architectural Design Competition for Uşak Province in 2011.

She has also been oil painting since 1998. Her work has been shown in numerous places, including seven solo exhibitions and three overseas exhibitions.