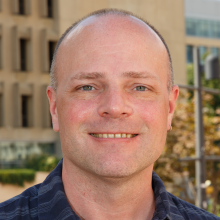 His previous work was at George Washington University’s Libraries and Academic Innovation where he developed and managed websites and web services, ran workshops and seminars, and trained junior staff as part of the Scholarly Technology team. Prior to that he was the web manager for the Harvey Goldberg Center for Excellence in Teaching at The Ohio State University, and the Artistic Director of Hubris Games.

He attended Carnegie-Mellon University's School of Drama, NYU Tisch School for the Arts, and Sarah Lawrence College. He spent part of his childhood in Europe and Southeast Asia. In the United States he’s lived in Memphis, New York, San Francisco, Columbus, Pittsburgh, and the District of Columbia.

He's a Drupal Association member and has been attending DrupalCon North America since Denver in 2012.