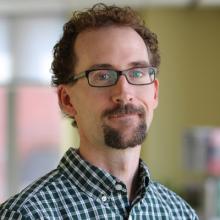 Bill Dugan is WRI's Creative Director. He works to develop and maintain the integrity of visual communications and the WRI brand.

In the last fifteen years, Bill has worked as a designer at several agencies in the Baltimore and Washington Metro areas, did a stint in the gaming industry, and ran his own web consultancy. Most recently he was Design Director at an an integrated design and advertising agency, building campaigns for clients like the Johns Hopkins University, the University of Maryland, Sheppard Pratt, Deutsche Bank, and Cornell University. His editorial illustration has been published in the Baltimore Sun, the Washington Post, the LA Times Magazine, and the Detroit Free Press.

Bill graduated from the Maryland Institute College of Art with a Bachelor of Fine Arts in Illustration.

He lives in Catonsville, MD. with his wife and daughter, and spends his spare time restoring a 100-year-old house, a 40-year-old truck, homebrewing beer, and taking pictures of all of them.