Globally more than 18 million hectares of tree cover lost in 2013, but rates of loss in Indonesia showed signs of slowing.

WASHINGTON (April 2, 2015)— Northern boreal forests, primarily in Russia and Canada, suffered significant tree cover loss in 2013, largely driven by large forest fires, according to new data and high-resolution satellite-based maps released by Global Forest Watch, a partnership led by the World Resources Institute. New data show Russia and Canada (two of the biggest forest countries in the world) accounted for 34 percent of global tree cover loss from 2011-2013, losing a combined average of nearly 6.8 million hectares (26,000 square miles) each year, an area equivalent to the size of Ireland. Some of the tree cover loss is only temporary, as forests can regenerate after disturbances such as fire though in the boreal region this is a very slow process. Russia (4.3 million hectares) had nearly double the tree cover loss of Canada (2.5 million hectares).

“This new data shows in detail how Russia and Canada have faced a massive spike in tree cover loss,” said Dr. Nigel Sizer, Global Director, Forests Program, WRI. “These forests and soils contain vast carbon stocks so losses represent a significant contribution to the greenhouse gas emissions that are driving climate change. As we head toward the pivotal 2015 climate summit in Paris, more attention is needed to the management and monitoring of boreal forests.”

Studies estimate that fires accounted for around 70 percent of total tree cover loss in Canada and Russia in recent years. In some regions, boreal forests are burning more now than at any time in the last 10,000 years. Researchers anticipate that climate change will increase the frequency and intensity of boreal forest fires, producing more late-season fires that kill trees, and releasing emissions from burning trees and peat soils.

“This should be a clear call to action to look closely at forest management in Russia and Canada in the face of climate change” said Olga Gershenzon, Board Chair of Transparent World, a Russian NGO, and founder of ScanEx, a Russian commercial satellite imagery company and GFW partner. “The massive tree cover loss shows there is much to be improved in terms of monitoring and understanding the causes and types of forest fires, as well as making information about fires available to the public in real time along with maps of land allocation and responsibility.”

Although tree cover loss remains alarmingly high globally, there are encouraging indications that some countries, including Indonesia, are having success in slowing the rates of permanent tree cover loss, or deforestation, in important forest areas.

Indonesia’s annual tree cover loss declined in 2013 to the lowest point in almost a decade. Possible reasons for the change include a moratorium on new concessions for forest conversion, a significant decline in agricultural commodity prices (especially palm oil), corporate zero-deforestation commitments, and the fact that much of the most accessible forests have been already cleared. But, more research needs to be done to confirm the trend and underlying drivers of this shift.

“This new information tells a very positive story about Indonesia’s forests,” said Siti Nurbaya, Minister of Environment and Forests for Indonesia. “It is too early to say this is a definitive trend, and the ministry is now examining how our numbers compare with this finding. If it holds true, this could be a powerful indicator that Indonesia’s significant investments in forest protection are paying off. We intend to take additional steps to ensure these positive trends continue.”

The new data come from the University of Maryland and Google, and represent the largest and most up-to-date global data set for tree cover loss. With the addition of these data, Global Forest Watch now features tree cover loss data spanning 2000-2013 at a 30-meter resolution. Tree cover loss is a measure of the total loss of all trees within a specific area regardless of the cause. It includes both permanent human-driven deforestation due to expanding agriculture and infrastucture, as well as temporary tree cover loss from forest fires (both natural and man-caused), logging, plantation harvesting, and tree mortality due to disease and other natural causes.

“Our new maps of global tree cover change, generated from over 400,000 satellite images, give us good news and bad news,” said Dr. Matt Hansen, Professor of Geography, University of Maryland, who oversaw the analysis. “Landsat satellite imagery, made freely available by NASA and USGS, will enable researchers to track forest cover change over time and determine if these new findings are a function of underlying drivers, whether policies related to forest governance or more distal factors such as changes in climate.”

The new data was made possible through free public access to satellite imagery provided by the U.S. Geological Survey Landsat program, in partnership with NASA. The new 2013 data is publicly available through maps, data visualizations, and downloads at globalforestwatch.org. Tree cover loss can also be monitored through near real-time alerts such as FORMA, Imazon SAD alerts, and Terra-i alerts. For more information visit www.globalforestwatch.org. 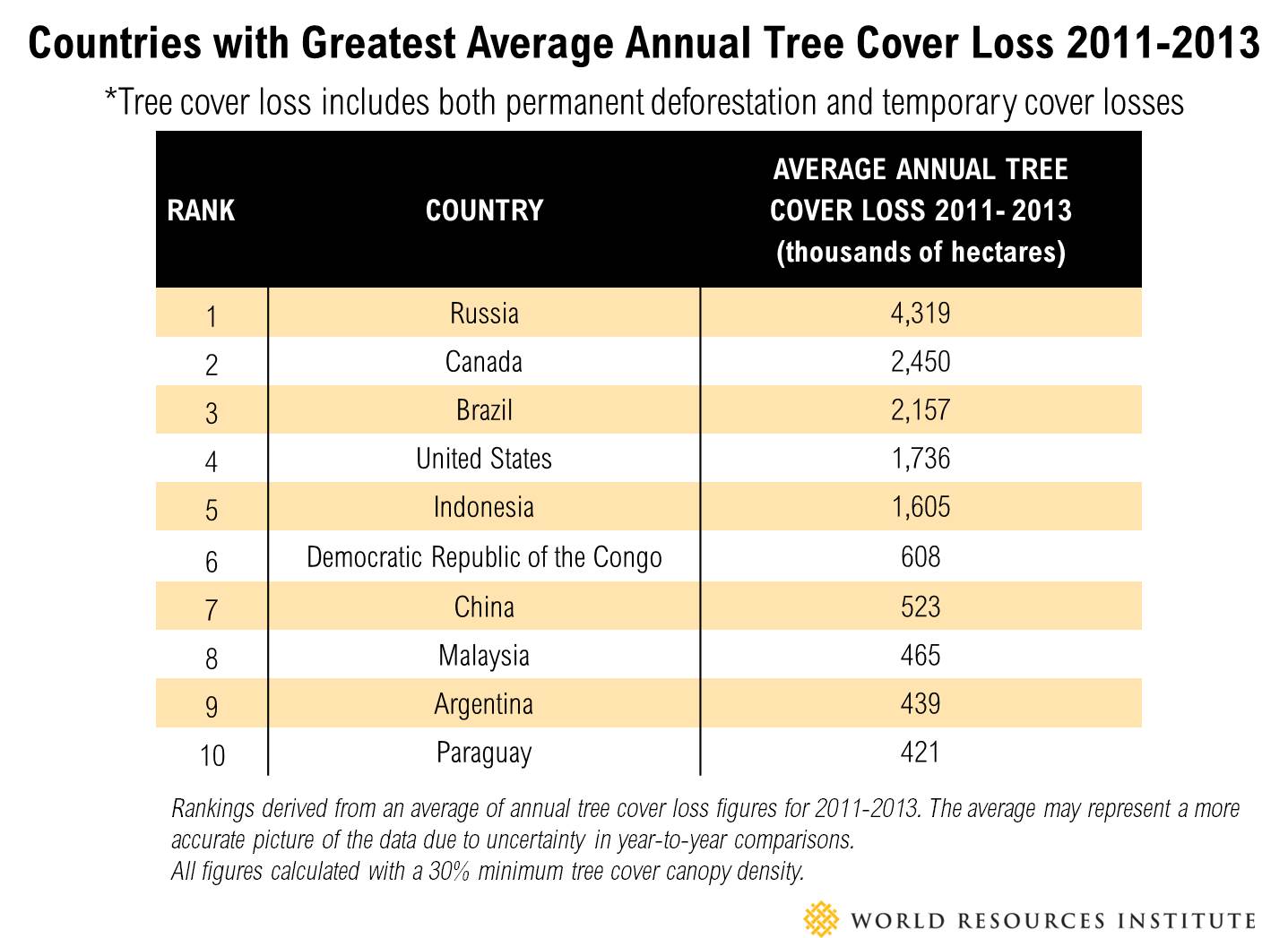