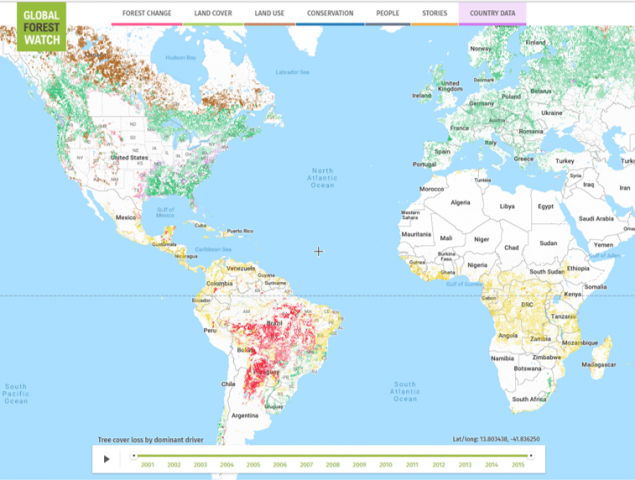 WASHINGTON (September 12, 2018)– More than a quarter of global tree cover loss between 2001 and 2015 was associated with commodity-driven deforestation, not likely to be forested again. These findings come from a study released today in Science by researchers from World Resources Institute, The Sustainability Consortium, University of Arkansas, Arizona State University and University of Maryland.

The first of its kind, the new global map of tree cover loss drivers is available on Global Forest Watch beginning today.

“Beyond seeing where and when tree cover loss has happened, people can now use Global Forest Watch to see why loss has occurred,” said Nancy Harris, Forest Program Research Manager at World Resources Institute and coauthor of the study. The results provide deeper insight into the overall state of global forests by identifying where tree cover loss leads to a long-term reduction in forest cover, and where trees will likely regrow. “This study not only identifies where deforestation is occurring, just as importantly it tells us where forest loss is not deforestation."

The most concerning finding is the amount of “permanent” conversion of forest for production of commodities like palm oil, soy, beef, minerals, and oil and gas, which was most concentrated in the tropical forests of Latin America and Southeast Asia. For the first time, deforestation due to commodity production can now be quantified, a number that is particularly important for companies that have committed to zero deforestation within their production. The study results show that collectively, companies are not on track to meet these commitments, as an average of 5 million hectares of deforestation per year still comes from commodity supply chains.

“Although most changes to tree cover are temporary, such as when a forest recovered from a wildfire or when timber farms were replanted, patterns seen in the imagery showed that a significant proportion of global forests are not coming back,” said Philip Curtis, consultant for The Sustainability Consortium and the study’s lead author.

The authors of the study visually interpreted thousands of satellite images in Google Earth to identify what caused forest disturbance around the world. Using a 10 by 10-kilometer grid for the entire globe, the researchers then trained a computer model to predict whether commodity production, forestry, shifting agriculture, wildfire or urbanization determine the most likely driver of tree cover loss between 2001 and 2015.