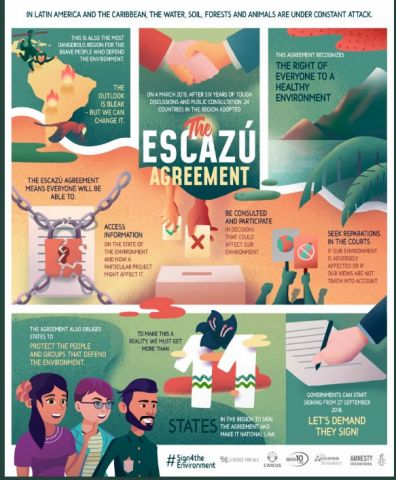 NEW YORK (September 27, 2018) –The Escazú Agreement, an historic treaty that guarantees environmental rights in Latin America and the Caribbean, and provides special protections for environmental human rights defenders, was signed by 12 countries today during the 73rd session of the United Nations General Assembly, enough to ensure that it will move forward and be brought into force once ratified. On the first day it opened for signature, Antigua and Barbuda, Argentina, Brazil, Costa Rica, Ecuador, Guatamala, Guyana, Mexico, Panama, Peru, St. Lucia, and Uruguay signed the agreement, with more expected throughout the

The landmark treaty—also known as the Regional Agreement on Access to Information, Public Participation and Justice in Environmental Matters, or LAC P10—is designed not only to protect environmental defenders, but also to make it easier for nearly 500 million people to access information, participate in decision-making processes that affect their lives and hold powerful interests accountable.

“Tragically, last year four environmental defenders were killed each week and 60 percent of these deaths were in Latin America. We need to do much more to protect people, their land and their rights,” said Andrew Steer, President & CEO, World Resources Institute. “The Escazú Agreement has the potential to greatly reduce conflict and expand rights to all people. This will send a clear message throughout the region that all people should have the right to a healthy environment without fearing for their lives.”

Principle 10, known as the environmental democracy principle, was adopted in 1992 as part of the Rio Declaration on Environment and Development. A process to adopt a regional agreement on Principle 10 for Latin American and the Caribbean began in 2012 at Rio+20. On March 4, 2018, after six years of negotiations, 24 countries adopted the text of the Escazú Agreement—the region’s first ever legally binding treaty on environmental rights.

“This historic agreement demonstrates regional leadership from countries in Latin America and the Caribbean and represents a major step forward for my country. We call on all countries in the region including Chile to sign the agreement and join in early ratification,” said Andrea Sanhueza, a member of The Access Initiative coalition in Chile.

World Resources Institute, in partnership with the United Nations Economic Commission for Latin America and the Caribbean, the governments of Costa Rica and Chile, Open Society Foundations, The Access Initiative, CIVICUS, Derecho Ambiente Recursos Naturales (DAR), Amnesty International and Namati, will host an event tonight to celebrate this historic achievement.