Home > STATEMENT: At COP22 in Marrakech, Climate Negotiators Agree to Roadmap to 2018

STATEMENT: At COP22 in Marrakech, Climate Negotiators Agree to Roadmap to 2018 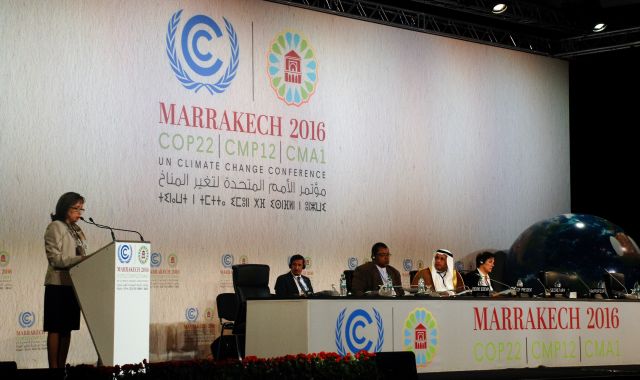 MARRAKECH (November 18, 2016) – The UN climate negotiations (COP22) concluded today in Marrakech, Morocco with countries agreeing to finalize the rules for the Paris Agreement by 2018 as well as other key decisions to advance implementation of the global pact.

“The Marrakech climate talks affirmed the world’s strong commitment to international climate action. Delegates in Marrakech made crucial progress in building the foundation to support the Paris Agreement, which went into force just days before COP22. Most importantly, negotiators agreed to finalize the rules of the Paris Agreement by 2018 and developed a clear roadmap to meet that deadline. With a final rulebook in hand, the 2018 climate summit will set the stage for countries to put forward their enhanced national climate plans in 2020.

“Notably, the first substantive decision under the Paris Agreement was that it should be served by the Adaptation Fund, to which Belgium, Germany, Italy, and Sweden together pledged $81 million in new contributions. Negotiators in Marrakech also emphasized the importance of expanding support for developing countries to address climate change, particularly for adaptation. In order to maintain trust, developed countries must continue to scale-up funding in line with their $100 billion commitment by 2020.

“There is no ignoring that the election of Donald Trump sent reverberations through the negotiation halls, but delegates carried on with a strong spirit of determination. No country stepped back from its commitment to climate action. On the contrary, in the few days since the election, Australia, Botswana, Japan, Pakistan, Italy and others have joined the Paris Agreement. Support for climate action remains unshakeable.

“Outside the negotiations, climate progress is also moving forward. The launch of the NDC Partnership brought together 33 countries and 9 international institutions to accelerate climate action on the ground and advance sustainable development. Morocco, which is the co-chair of the NDC Partnership and served as the COP22 president, deserves particular recognition for their steadfast and effective leadership. In addition, four countries – the United States, Canada, Mexico, and Germany -- put forward serious strategies for deep emissions reductions by mid-century.

“National governments were not the only ones taking the long view at Marrakech. As of this week, 200 companies, representing $4.8 trillion in market value, have put forward emissions targets in line with science, among them Wal-Mart, Mars Inc., and Sony.

“Climate change has clearly shifted from a siloed issue to being at the center of international relations. Last year, 195 countries adopted the Paris Agreement, one of the brightest spots of global cooperation in recent memory. With climate risks mounting and opportunities for sustainable development expanding, the global community remains fully committed to its success.