Home > RELEASE: New Research Suggests Tigers Can Come Back From Brink of Extinction If Habitats Are Preserved

RELEASE: New Research Suggests Tigers Can Come Back From Brink of Extinction If Habitats Are Preserved 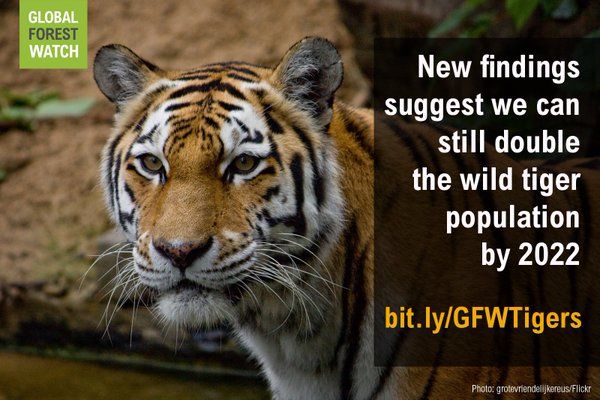 WASHINGTON (April 1, 2016)— Enough forested habitat remains to bring the tiger back from the brink of extinction, according to new analysis published in Science Advances today by researchers at the University of Minnesota, RESOLVE, Smithsonian Conservation Biology Institute, Rainforest Alliance, Stanford University and World Resources Institute (WRI). The study found forest loss was lower than expected in tiger habitats, suggesting there is more than enough habitat remaining to achieve the international commitment of doubling the wild tiger population by 2022 (an initiative known as “Tx2”) with additional conservation investment.

Tiger populations can rebound quickly when habitat and prey are abundant and hunting is controlled. For example, Nepal and India have reported 61 and 31 percent increases in their tiger populations, respectively. This is partly thanks to conservation initiatives like the preservation of the cross-boundary Terai Arc Landscape. Reaching the Tx2 goal will require that any significant future tiger habitat loss is prevented, key corridors are restored between remaining forest fragments, nations implement green infrastructure to prevent habitat fragmentation, and conservation managers translocate and reintroduce tiger populations where necessary.

The study, “Tracking changes and preventing loss in critical tiger habitat”, shows that less than 8 percent (nearly 79,000 km2 or 30,000 mi2) of global forested habitat was lost from 2001-2014. This rate of forest loss is lower than anticipated, given that tiger habitats are generally distributed in fast-growing rural economies, some with high population densities and facing severe pressures from industrial agriculture.

Despite lower-than-expected levels of forest loss within tiger habitat, the study also confirms the precariousness of the species’ survival. The researchers estimate that forest clearing since 2001 resulted in the loss of habitat that could have supported an estimated 400 tigers. This is potentially devastating, considering the current global tiger population is fewer than 3,500 individuals. Furthermore, the study did not consider the deleterious effects of poaching and prey loss within these landscapes.

The vast majority (98 percent) of tiger forest habitat loss occurred within just 10 landscapes, often driven by the conversion of natural forest to plantations for agricultural commodities such as palm oil. The landscapes with the highest percentage of forest clearing were in areas of Malaysia and Indonesia with heavy oil palm development, such as the Bukit Tigapuluh ecosystem in Sumatra, which has lost more than two-thirds (67 percent) of its forest since 2001, resulted in a loss of habitat sufficient to support an estimated 51 tigers. Palm oil development remains an ongoing threat— in Indonesia alone, more than 4,000 km2 (1,544 mi2) of forest habitat, an area five times the size of New York City, have been allocated for oil palm concessions.

This is the first major study to examine tree cover change systemically across all 76 Tiger Conservation Landscapes using high and medium resolution satellite data. Global Forest Watch and Google Earth Engine, along with analysis from the University of Maryland, provided the forest change data for long-term analysis. Global Forest Watch provides monthly and in some cases weekly tree cover loss alerts that can empower park rangers and communities to monitor and protect tiger forest habitat, even at the finest scale of a single forest corridor used by a dispersing male tiger.

You can explore the maps of tiger habitat and tree cover change online at globalforestwatch.org, or subscribe for forest clearing alerts here.

“It is remarkable and unexpected that tiger habitat has been relatively well-preserved over this 14-year period,” said Anup Joshi, Research Associate at the University of Minnesota and lead author. “It is not a sign that we are in the clear yet, but it does show us that tigers can potentially recover from the edge of extinction if we make the right forest management choices. We are seeing this already in areas like the border between Nepal and India, where forest cover is recovering with the help of communities and tigers are coming back in a big way. ”

“After decades of working in tiger conservation, it is great to have some encouraging news for once,” said Eric Dinerstein, Director of the Biodiversity and Wildlife Solutions Program at RESOLVE and a Senior Fellow at WRI. “But illegal hunting of both tigers and prey can result in ‘empty forests’ without enough food or shelter to support large predators like tigers. Measuring and combatting this sort of forest impoverishment and its effects will be essential. It complements our efforts to identify habitat poaching in this study.”

“The ability to measure forest change within endangered species habitat across the globe is a huge step forward for conservation and remote sensing,” said Crystal Davis, Director of Global Forest Watch at the World Resources Institute. “Now it is time to use the data to take action. If we can use that information to respond faster to threats, we can ensure that tigers will survive for future generations.”

About University of Minnesota
The University of Minnesota's College of Food, Agricultural and Natural Resource Sciences, based in St. Paul, Minn., is one of the world's leading research, education and outreach institutions in the environmental and agricultural sciences. Its faculty, staff and students are dedicated to the enhancement and preservation of the world's food supplies and natural resources.

About World Resources Institute
WRI is a global research organization that spans more than 50 countries, with offices in the United States, China, India, Brazil, and more. Our more than 300 experts and staff work closely with leaders to turn big ideas into action to sustain our natural resources—the foundation of economic opportunity and human well-being. (www.wri.org)