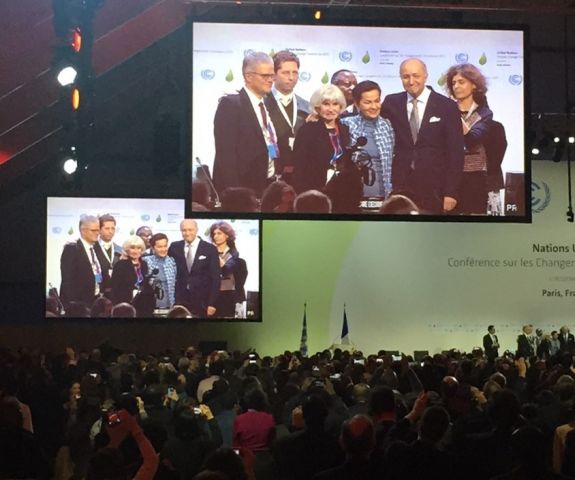 PARIS (December 12, 2015)— Today in Paris, nearly 200 UN delegates united around a global agreement to address climate change, the Paris Agreement. The agreement will bring all countries together into a common framework to reduce global greenhouse gas emissions.

Following are statements by Andrew Steer and Jennifer Morgan.

“The City of Light is now the City of Hope for climate change. Leaders came to Paris with serious determination to get a strong climate agreement and that’s precisely what’s happened. While not sufficient to solve the problem alone, the agreement puts us on a path where a solution is possible.

“The Paris Agreement has the power to send loud, clear signals to economic markets that there’s no turning back from the transition to a zero-carbon economy. The agreement will be good for people, good for the economy, and good for the planet.

“The Paris talks have already delivered a sizable impact. It builds on the foundation of national climate commitments by more than 185 countries. It reflects the groundswell of activity in capitals, cities, board rooms, stock markets, forests and fields that complement the global and national actions.

“Yet, our work is far from over. Over the coming months, we will join with our partners to build on the foundation created here. The shift from commitment into action will be even harder and take even more determination. But for today at least we rest a little easier knowing that the world will be stronger and safer for our children and future generations.”

“It took hard work, grit and guts, but countries have finally united around a historic agreement that marks a turning point on the climate crisis. The Paris Agreement marks a new form of international cooperation – one where developed and developing countries are united by a common and fair framework. The agreement is both ambitious and powered by the voices of the most vulnerable.

“Of course, like all tough negotiations, we cannot say we came away with everything we wanted. And there is much work to be done. The agreement includes clear signals: a commitment to come back to the table every five years to review and strengthen country commitments; a long-term signal about the inevitable shift to a zero-carbon economy; and financial support for vulnerable countries that will be scaled up over time.

“We can enjoy this moment, but there is little time to rest. World leaders need to build on the momentum created by the Paris moment and move even faster and further toward a decarbonized economy.

“In Paris, the world has delivered a clear message: we are united in our determination, we stand together, and we will push forward to create a safer, healthier and more prosperous future.”