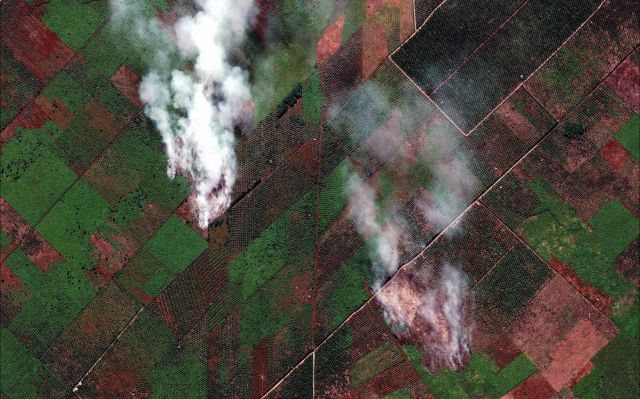 WASHINGTON (August 5, 2014)— Singapore’s Parliament passed the Transboundary Haze Pollution Act 2014 which allows regulators to prosecute companies and individuals that cause severe air pollution in Singapore by burning forests and peatlands in neighboring countries. The legislation was first proposed after fires in Indonesia spiked in June 2013, engulfing Singapore in haze. As the pattern of fires has continued, demand for action has increased and the issue has become a national priority for Indonesia, Singapore, and the other countries in the region.

WRI provides ongoing analysis and data on the fires through Global Forest Watch-Fires, an online platform for monitoring and responding to forest and land fires in Southeast Asia using near real-time information.

“Singapore’s transboundary haze law marks a new way of doing business for governments and companies seeking to address forest and peat fires. It sends a powerful message that those who burn land and forests illegally will be held accountable. In particular, any companies caught using fire illegally now face the massive reputational risk of being dragged into court in Singapore as soon as their executives step foot on the island. Their customers, bankers and insurers will surely shy away from doing business with them.”

“The causes of fires and haze in Southeast Asia are complex and difficult to address. For many decades these fires have been used to clear land for agricultural expansion into forests and peatlands, and as a tool in conflict between companies and communities over land. Over the past two years, especially high concentrations of fires in Riau Province, Indonesia, have taken a deep toll, in terms of human health, environmental degradation, and economic damage.”

“Although the new law alone will not address all the deep-rooted causes of the fires, it contributes to a larger positive trend in the way governments and companies are dealing with the fires. The Indonesian government, for example, has made serious investments in their national Karhutla (Land and Forest Fires) Monitoring System. This includes a ‘situation room’ where fires and weather conditions are monitored in real time using tools like Global Forest Watch-Fires. Ultra high-resolution satellites are documenting individual fires and gathering high-quality evidence of possible wrongdoing. As a result, oil palm, timber, and pulpwood companies are making significant no-fires and no-deforestation commitments.”

“The message is becoming increasingly clear for individuals and companies that burn land illegally—playing with fire has serious consequences.”