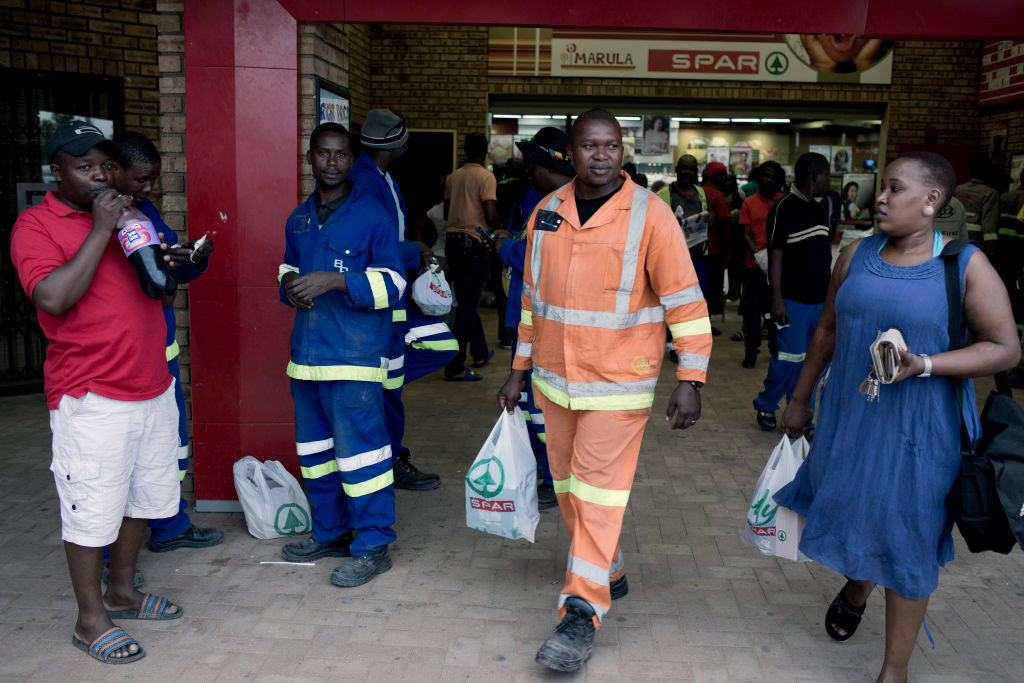 South Africa’s economy and energy supply have long depended on mining domestic coal. It fueled 88% of South Africa’s electricity generation in 2019 and 73% of its energy supply in 2018, and those levels have held relatively steady for several years. Coal is also a major export: 25-30% of South Africa’s mined coal is exported at prices higher than are found domestically, which keeps many mines profitable. The prevalence of coal has caused significant climate and environmental impacts, making South Africa the world’s 13th highest carbon emitter in 2018 (though it ranks 24th by population and 38th by GDP).

As of 2019, up to 200,000 workers were employed in South Africa’s coal mines, coal power plants and coal transport, equivalent to roughly 1% of formal employment in 2020. This includes an estimated 82,000 workers in the mining sector (2018) and nearly 50,000 workers employed in primarily coal-fired power plants run by Eskom, the state-owned electric utility. Eskom produces 90% of South Africa’s electricity supply and is responsible for roughly 40% of the country’s GHG emissions. Eskom holds RND 464 billion ($32 billion) in debt, which it is struggling to service, and load shedding and high costs have created domestic challenges.

Coal mining and power generation in South Africa are concentrated in one province, Mpumalanga, where it accounted for 19% of gross value added in 2015. The industry is further concentrated within just four municipalities — eMalahleni (Witbank), Steve Tshwete (Middelburg), Govan Mbeki and Msukaligwa (Ermelo) — where it is critical to those workers and communities. About 5% of Mpumalanga’s formal workers are employed in the sector, each supporting an average of three dependents. Coal miners’ median pay of $600 per month compares favorably to the median formal pay of $300 per month, and higher-skilled workers at power plants earn a median of $900 per month.

Displaced coal workers would likely struggle to find new jobs, as South Africa has faced long-term high rates of unemployment: over 25% since 2010, which spiked to over 30% in late 2020 due to the COVID-19 pandemic. Any potential job losses are politically sensitive and likely to elicit a strong response, especially from powerful coal-linked unions. South Africa is one of the most unequal countries in the world, due in part to the legacy of apartheid.

Looking ahead, market signals point to a continued decline in coal-related employment due to automation, the projected replacement of retiring plants with more cost-competitive alternatives including renewables, and the anticipated loss of export markets, which will make many coal mines unprofitable and compound the issues with Eskom.

In this context, the need for a just transition in South Africa is particularly pressing — but the need is also well understood, and dialogues and planning have been underway for about a decade. Around 2011, in the context of COP17 in Durban, the national conversation around a just transition was initiated by trade union groups. The Congress of South African Trade Unions’ (COSATU) 2011 Policy Framework on Climate Change and subsequent call to action centered the concept of just transition, called for the participation and leadership of organized labor and requested government support for “climate jobs” and renewable energy.

The following year, in 2012, South Africa’s National Planning Commission developed the country’s first National Development Plan, which aimed to eliminate poverty and reduce inequality by 2030. The plan included a chapter on just transitions that proposed a framework for a national-level social dialogue. A few years later, South Africa became the only country to mention the importance of a just transition in its initial Nationally Determined Contribution  (NDC) submitted under the Paris Agreement in 2015.

However, transition issues remained sensitive. In 2017, when Eskom announced that it would soon close five coal-fired power plants, there was a strong reaction from trade unions, and thousands of coal truck drivers protested, blocking road access into the city of Tshwane to express concern about job losses. That same year, the National Planning Commission launched the Social Partner Dialogues on Pathways for a Just Transition to build toward delivering the just transition chapter in South Africa’s National Development Plan.

The dialogues convened “the four social partners” — government, labor (unions), civil society and business — to build a common vision for a just transition and to identify pathways to achieve this vision. The dialogues concluded in May 2019, with delegates emphasizing the importance of just management of the energy-water-land use nexus in South Africa’s economic and social future. Consensus was reached on general principles such as social dialogue, corruption-free governance and participatory decision-making. However, several major issues remain under debate, notably emissions reduction pathways, state vs. private ownership of resources, the balance between conservation of natural resources and equitable access to them and the future of Eskom.

Several other assessment and planning measures are underway to support a just transition in South Africa. As stipulated in the 2011 National Climate Change Response White Paper, the government launched a comprehensive National Employment Vulnerability Assessment (NEVA) in 2017 to evaluate the impacts of climate change and climate action on employment by sector and understand what measures could offset those impacts. In parallel, Sector Job Resilience Plans (SJRPs), will be developed by relevant ministries to explore sectoral opportunities for job creation.

In addition, Social and Labour Plans (SLPs) had been introduced in 2002 to address social conflicts associated with mining and support local economic development. An SLP, which is required for mines to gain a license to operate, describes how the mining company will share the mine’s benefits with local communities, though a lack of accountability and enforcement has been noted.

As of late 2020, the Presidential Climate Change Coordination Commission (PCCCC) was in the process of being established. Its mandate includes coordinating South Africa’s just transition to a low-carbon, resilient economy by 2050, operationalized by finalizing the NEVA and the SJRPs, coordinating the implementation of the Low Emissions Development Strategy 2050 (South Africa’s Long-term Strategy under the Paris Agreement), and overseeing the implementation of the revised National Waste Management Strategy 2020. The PCCCC’s recommended preliminary budget is R50 million ($3.35 million) over five years.

Unlike many countries, South Africa has had an extended, critical engagement with just transition, including a range of assessments, social dialogues and policies. Still, almost 10 years into the process, on-the-ground change is limited and a clear path forward has yet to emerge. Coal mining, generation and exports remain high, as do unemployment and inequality, while the impacts of coal’s decline and climate change are already being felt. Recent studies suggest the decline of coal may happen even more quickly than anticipated in the government’s 2019 Integrated Resource Plan, adding urgency to planning processes. Achieving a just transition to a sustainable future in South Africa will require more concrete transition planning for coal workers in Mpumalanga, and translating plans into concrete action to decarbonize and reform the energy sector.