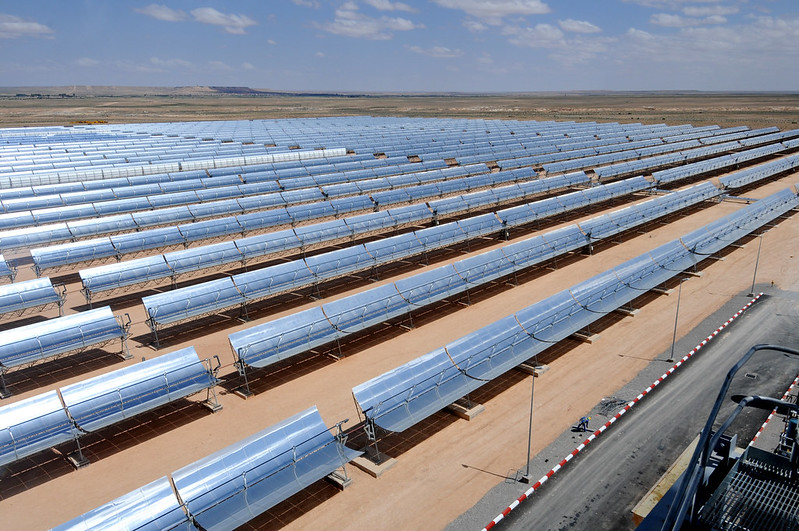 Morocco committed to 52% of its installed power generation capacity come from renewables by 2030. In developing the Noor Solar Power Station, a large-scale solar power plant in rural northeast Morocco, the Moroccan Agency for Solar Energy (MASEN) undertook a variety of measures to ensure that the project would result in economic benefits for the adjacent communities, including a Social Development Plan to improve infrastructure and services, a local content target to ensure local employment and business opportunities, and community engagement efforts.

Morocco has ambitious climate commitments, including a pledge to have 52% of its power generation capacity come from renewables by 2030. The phaseout of fossil fuel subsidies in 2014-2015 helped create fiscal space to invest in renewable energy projects which, in turn, attracted private investment. (See Figure 1) These projects aim to reduce CO2 emissions (in line with Morocco’s Nationally Determined Contribution under the Paris Agreement and the Morocco Solar Plan), as well as increase energy independence and create good jobs. Between 2013 and 2019, Morocco’s combined hydro, wind and solar power generation increased from 4,346 GWh to 7,932 GWh, making up 19% of total electricity generation in 2019 (and 3.5% of total 2018 energy use). 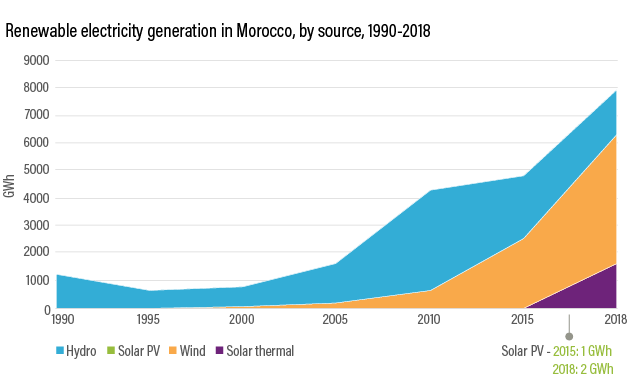 The Noor Solar Power Station, situated in the desert near Ouarzazate in northwest Morocco, was the first solar mega-project of the Moroccan Agency for Solar Energy (MASEN) and the largest concentrated solar power plant in the world when it was commissioned, in four phases, in 2016 and 2018. Altogether, the complex covers 3,000 hectares (7,143 acres) with a planned capacity of 582 MW and a large economic impact. Phase 2 alone was estimated to create 2,000-2,500 jobs during construction (plus thousands of indirect jobs) and several hundred once in operation.

The project site selected for the NOOR complex was not populated, meaning that no resettlement was required and no culturally important sites were disturbed. The Government of Morocco acknowledged traditional structures for communal land ownership and navigated the community’s processes when purchasing the land.

The Government of Morocco and MASEN took proactive measures to ensure that those benefits and opportunities would accrue to neighboring communities, especially the rural Commune of Ghassate and the City of Ouarzazate. This included efforts to engage local communities in project development and give them a formal stake, especially since community engagement in major infrastructure projects was a relatively new concept in Morocco. Due in part to those efforts, residents overwhelmingly supported the project and anticipated positive impacts for themselves and the wider region. The public attention and prestige associated with this flagship national project, including a visit from King Mohammed VI, increased local pride and reputation for the region.

However, like any large-scale infrastructure project, Noor could create adverse impacts. Residents near the plant were most concerned about:

The region had some of Morocco’s poorest infrastructure and services (including limited healthcare access, poor water quality and mostly lacking sanitation systems outside of the City of Ouarzazate). Since the Noor project would increase pressure on that infrastructure and services, the proceeds from MASEN’s land purchase were transferred to the Department of Rural Affairs (DAR) to fund a Social Development Plan (SDP). The SDP included expanding access to mobile healthcare for rural villages and improvements in drinking water facilities. The overall budget for these projects was estimated at around 30.5 million MAD (about $3.2 million at the exchange rate in late December 2018).

MASEN set a 30% local content target that gave preferences to local labor, materials and service used for the solar power facility, voluntarily exceeding legal requirements with the aim of contributing to regional economic development and building local buy-in. During the first year of construction, local SMEs profited from supplying raw material, basic equipment and manufacturing components, and that income was largely re-injected into the local economy, generating economic multiplier effects. In 2014, 700 of the 1,800 employees during the first phase of construction were from Ghassate and Ouarzazate. Lower-skilled jobs, which were the most accessible to local residents, made up 46% of construction jobs and 21% of operational jobs. By 2015, income from Noor-related employment had already increased and diversified many community members’ incomes, improving their standard of living and resilience to economic shocks. Noor has since become the region’s largest employer. Young people who had left to seek work elsewhere returned to their families, leading to reports of stronger family ties and social support among family members. As of 2019, 30% of workers were local residents.

In September 2014, just 3.4% of Noor employees were women. ACWA Power Ouarzazate made efforts to include women in the project activities, including by promoting the sale of food products made by local women in the workers’ canteen, and specifically recruiting women for service, administrative or technical jobs, depending on their level of qualifications.

Longer-term, sustaining socio-economic benefits will depend on growing the industrial base and absorptive capacities of Ouarzazate's economy. MASEN supported a planned vocational training center (IFMEREE) focused on combined solar power, and new courses on renewable energy at the University of Ouarzazate.