As the U.S. Environmental Protection Agency (EPA) moves forward with standards to reduce emissions from existing power plants—expected to be proposed by June 2014—many states are beginning to think about how they will comply. WRI’s fact sheet series, Power Sector Opportunities for Reducing Carbon Dioxide Emissions, examines the policies and pathways various states can use to cost-effectively meet or even exceed future power plant emissions standards. This post explores these opportunities in Michigan. Read about additional analyses in this series.

New analysis by WRI reveals that Michigan has already made big strides to reduce its carbon dioxide emissions, including saving energy and increasing renewable power. And, it has the potential to go even further. According to our research, Michigan can reduce its power sector carbon dioxide (CO2) emissions 33 percent below 2011 levels by 2020 by complying with existing policies and improving infrastructure already in place. Taking these actions now can help the state meet future EPA emissions standards for existing power plants and achieve significant economic benefits.

Michigan’s Power Sector Has Been Getting Cleaner

Michigan’s power sector CO2 emissions have been declining in recent years, dropping 13 percent between 2005 and 2011. This trend is due in part to decreasing electricity demand, but also to a shift away from coal-fired generation. The use of coal fell 16 percent between 2005 and 2011 due to greater use of cleaner electricity sources, including natural gas and renewables. Electric generation from these sources grew by 41 percent and 32 percent, respectively, over the same time period.

The trend away from coal may continue as the state’s aging coal plants are retired—the state’s coal generators are more than 48 years old on average. But the use of coal still comprised more than half of in-state generation in 2011. Natural gas and renewable sources comprised 12 percent and 4 percent, respectively.

Read about how other states can reduce their power sector emissions. Check out our other blog posts on:

As we discussed in a blog post last month, states may have considerable flexibility in how they comply with EPA’s future power plant emissions standards, due to be finalized in 2015. EPA could allow states to pursue a range of CO2 reduction opportunities—including greater use of existing lower-carbon power plants, increased use of renewables, and energy efficiency, among other strategies. Our analysis found that Michigan could use the following existing measures to reduce its power sector CO2 emissions by one-third:

Michigan could achieve even greater long-term emissions reductions by building on its existing policies. With new legislation to expand its renewable and efficiency targets—coupled with greater efforts to expand CHP capacity—Michigan can reduce power sector CO2 emissions by an additional 20 percent in the next six years, to 53 percent below 2011 levels by 2020 and 76 percent below 2011 levels by 2030. These reductions would likely exceed even the most stringent EPA power plant standards in the longer term. Better yet, achieving these more significant emissions reductions makes good economic sense.

The Natural Resources Defense Council found that the benefits of Michigan’s energy efficiency standard outweighed its costs by three-fold through the first three years of the program, with total benefits exceeding $1 billion. The same study showed that by increasing its annual electricity savings from 1 percent to 2 percent per year going forward, the state could see annual net benefits of more than $1.5 billion.

Recent evidence shows that continuing to make use of under-utilized natural gas and adding new renewable capacity as alternatives to coal makes economic sense. According to estimates from the Union of Concerned Scientists, between 16 and 32 of Michigan’s coal units (representing 1,200 MW to 3,500 MW of generating capacity) are simply no longer economically competitive with cleaner electricity sources. The Michigan Public Service Commission’s 2013 progress report on the renewable portfolio standard found that the cost of renewables has been declining since the standard was implemented, and wind energy is now cheaper than new fossil fuel-fired power plants.

Michigan Can Build Off Progress Made To Date

Michigan is in a strong position to reduce its power sector emissions in the near term, but it’s important that the state continue to build on the progress it’s made. There have been recent proposals to repeal the state’s RPS. Doing so would make it more difficult to meet forthcoming power plant emissions standards even in the near term.

Michigan’s experience to date has shown that emissions reductions are achievable and economically beneficial. This is all the more reason why the state should continue to build off its existing progress and take additional steps to achieve even greater long-term reductions. By doing so, the state can accomplish two big goals: meeting EPA’s power plant emissions standards and making necessary progress to avoid the worsening impacts of climate change. 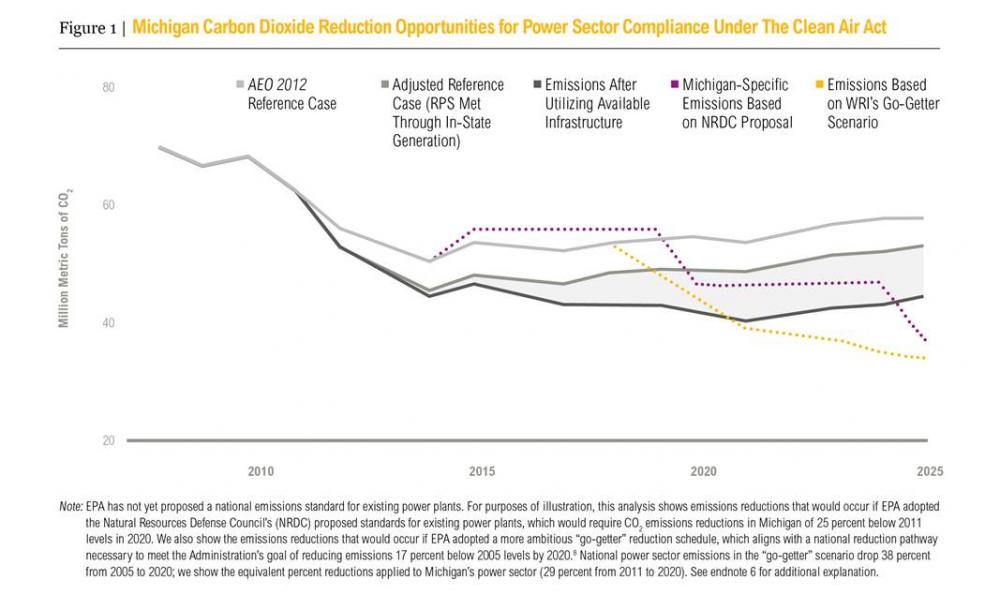