Reducing HFCs in the US Would Benefit Consumers and the Climate

Hydrofluorocarbons (HFCs) are a small but rapidly growing component of U.S. (and global) greenhouse gas (GHG) emissions. These gases, commonly used for cooling in appliances or as foam-blowing agents and aerosols, are potent greenhouse gases. Some HFCs can trap thousands of times more heat than carbon dioxide (CO2).

The climate potency of HFCs are a problem because their use is rising due to the phase-out of their ozone-depleting predecessors, hydrochlorofluorocarbons (HCFCs) and chlorofluorocarbons (CFCs), by 2030. HFC emissions are expected to grow 120 percent over current levels. Fortunately, climate-friendly substitutes already exist, and some of these alternatives can even create net savings for consumers. 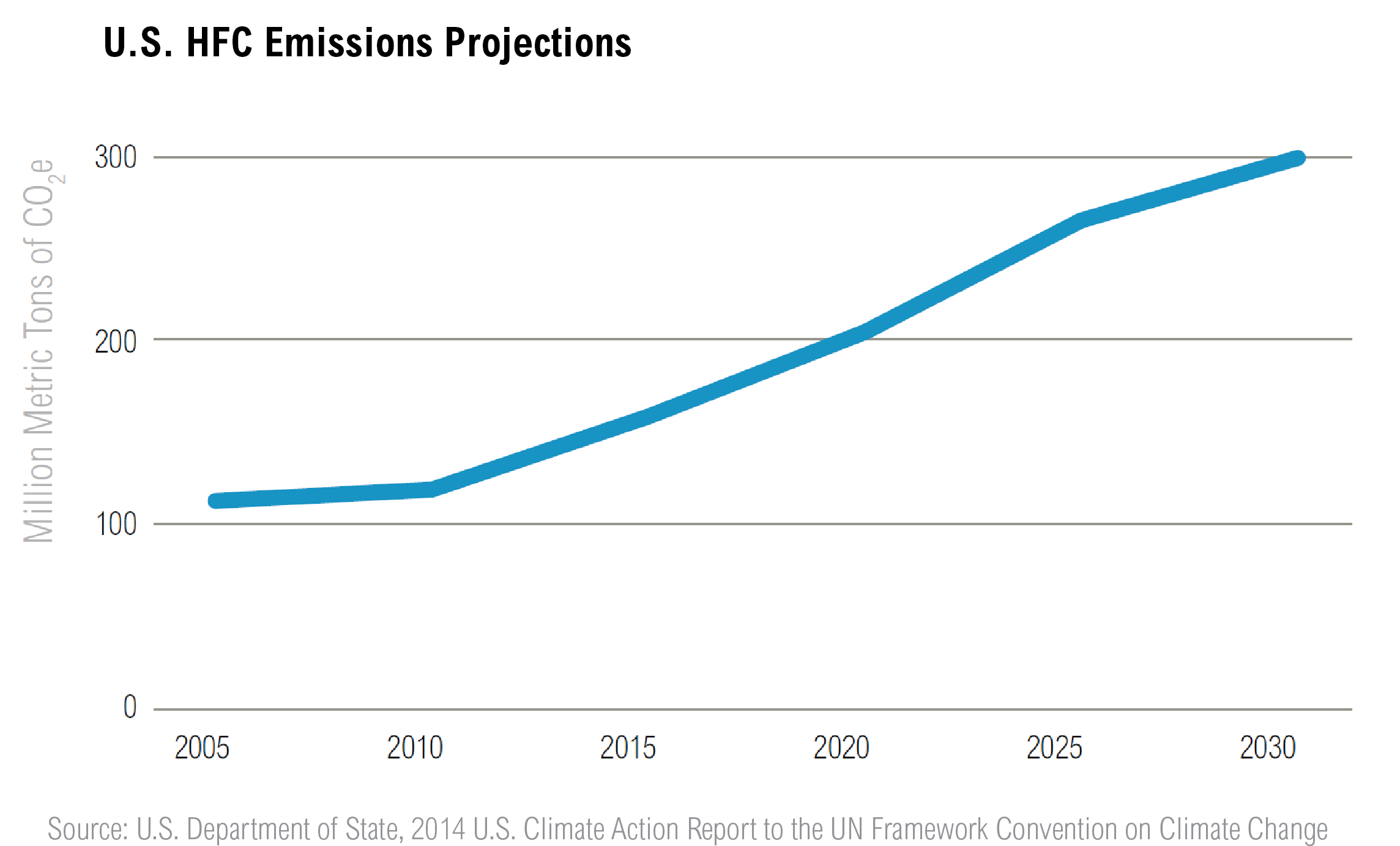 The Next Generation of Refrigerants Can Offer Efficiency Benefits

Major manufacturers like Honeywell, DuPont and Arkema are already producing alternatives to HFCs with low or zero global warming potential. They include “natural refrigerants” like CO2 and hydrocarbons, as well as synthetic alternatives with far lower greenhouse gas potency than the HFCs typically used today. Some of these alternatives also reduce the electricity demands of appliances and equipment, cutting power bills and GHG emissions. For example:

Although converting to HFC alternatives may offer net cost savings over time, some have high upfront costs, may require equipment replacement, or may need facility and vehicle redesigns. Additionally, customers who purchase refrigeration or air conditioning equipment may not know about the climate impacts of high-GWP HFCs or the availability of alternatives. Because of these barriers, the U.S. market may not rapidly adopt zero- or low-GWP HFC alternatives without new rules or financial incentives.

Industry Has Innovated to Reduce its Environmental Impact in the Past

The fluorocarbon industry set an innovation precedent when they began phasing out ozone-depleting CFCs after the Montreal Protocol took effect in 1989. This spurred technological development and investment in a new generation of air conditioning and refrigeration equipment, creating significant benefits to public health and the environment while producing lifetime savings for consumers. EPA found that globally, new products typically did not cost more than existing ones, and some products were actually cheaper to maintain than conventional equipment because of higher efficiencies, product quality and reliability.

Momentum is building worldwide to phase down high-GWP HFCs. More than 100 nations support the proposed North American amendment to the Montreal Protocol, which would reduce HFC consumption 85 percent by 2035 compared to 2008–10 levels.

Numerous HFC producers and consumers have also voiced support for a global phase-down, including the Alliance for Responsible Atmospheric Policy, an industry coalition of about 100 manufacturers and businesses relying on HFCs. Despite this progress, the Montreal Protocol has yet to be amended because several countries still oppose lowering their HFC use.

Meanwhile, EPA is driving cost-effective technology adoption through its authority under the Clean Air Act. EPA has already started offering incentives and standards to phase out high-GWP HFC use in passenger vehicles, pickups, vans and combination tractors. EPA also proposed rules in July 2014 to push higher-GWP HFCs out of the market for various applications through its Significant New Alternatives Policy (SNAP) program, and last Friday, they finalized a rule to approve some low-GWP alternatives for use.

While EPA’s actions are a good start, the United States should continue to work toward an international phase-down of high-GWP HFC use through the Montreal Protocol. Until then, there are several other actions it can take, including: