With a pivotal climate summit in Paris just weeks away, a new far-reaching survey by the Pew Research Center shows widespread support for a global agreement to tackle this challenge.

Covering 40 countries and views from more than 45,000 people, this is Pew’s biggest study on international attitudes on climate change. Majorities in all 40 nations surveyed called this a serious problem, and a global median of 54 percent considered it to be very serious. More than three-quarters—78 percent—said their country should limit greenhouse gas emissions as part of an international agreement set to be forged in Paris.

Based on interviews in March and April, 51 percent of respondents said people are being harmed now by a changing climate.

The level of concern varied by country and region, with Latin America and Africa most worried about climate change, followed by Europe, the Asia-Pacific region and the Middle East. China and the United States—the top two national emitters of climate-warming greenhouse gases—were among the least concerned. 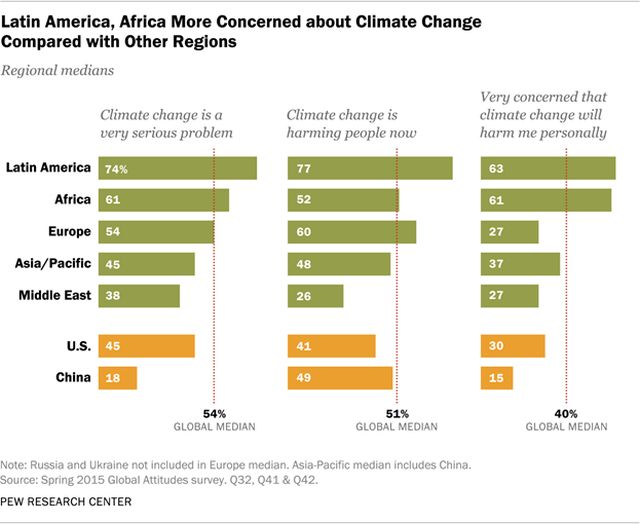 Majorities in nearly all the countries surveyed—Pakistan is the exception—agree that the problem should be tackled by limiting emissions. Beyond national and international policy change, though, most respondents also said significant lifestyle changes will be needed to confront the problem. And a majority of respondents said that rich countries like the United States, Japan and German should do more because of their historic greenhouse gas emissions. 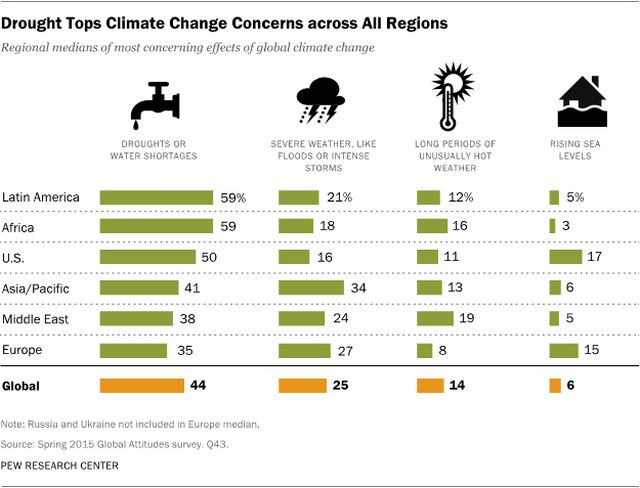 Among the various concerns related to climate, drought tops the list, according to the survey, followed by severe weather, extreme heat and rising seas. Wike explained that droughts came in first with people in regions like the western United States, where they are seeing firsthand the consequences of severe, long-term dry condition. Interestingly, nearly one in five U.S. respondents also said rising sea levels are a major concern, a message reinforced in a speech this week by Secretary of State John Kerry.

U.S. respondents were divided along party lines, the survey found, with Democrats much more likely than Republicans to see climate change as a problem. Nevertheless, 50 percent of Republicans support reducing greenhouse gas emissions.

“We have seen a rise in concern a little bit over the last five years in the United States,” Wike said.

While the partisan split is more dramatic in the United States, it also exists in Australia, Canada, Germany and the United Kingdom. 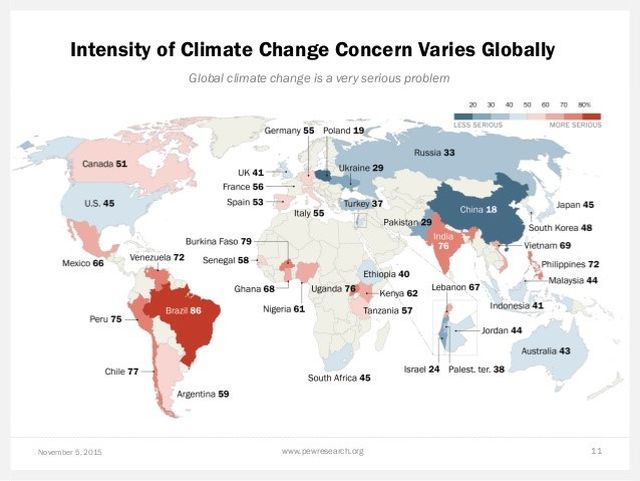 With global temperatures on track to set another record this year, the need for action is urgent and growing, sending a powerful message to international leaders that an overwhelming number of people want to see countries come together around an agreement this year.

Cities Can Save Money by Investing in Natural Infrastructure for Water

South Africa Pledges to Peak Its Greenhouse Gas Emissions by 2025