With New Jersey Poised to Slash Greenhouse Gas Emissions, A National Plan Could Show the Way

This November, New Jersey will elect a new governor, and both major candidates say New Jersey must do more to combat climate change. Against that backdrop, a new report, An Examination of Policy Options for Achieving Greenhouse Gas Emissions Reductions in New Jersey, explores how New Jersey can go from laggard to leader on climate action. This article focuses on an important first step: developing a detailed and comprehensive plan to reduce greenhouse gas emissions, i.e., a “deep decarbonization plan.”

Why Should States Plan for Deep Decarbonization?

Deep decarbonization plans help states ensure that their actions are consistent with emissions targets. Like many states, New Jersey has an ambitious statutory 2050 target – an 80 percent reduction in greenhouse gas emissions below 2006 levels. The state has implemented certain measures that will reduce emissions, including a Renewable Portfolio Standard that encourages electricity production from solar, wind and other clean sources. Some may be tempted to conclude the state is on the right path. A closer look at the numbers, however, shows otherwise (see figure below). Similar to the country as a whole, New Jersey’s current GHG emissions trajectory is relatively flat, far from the ambitious reductions needed to achieve deep decarbonization. 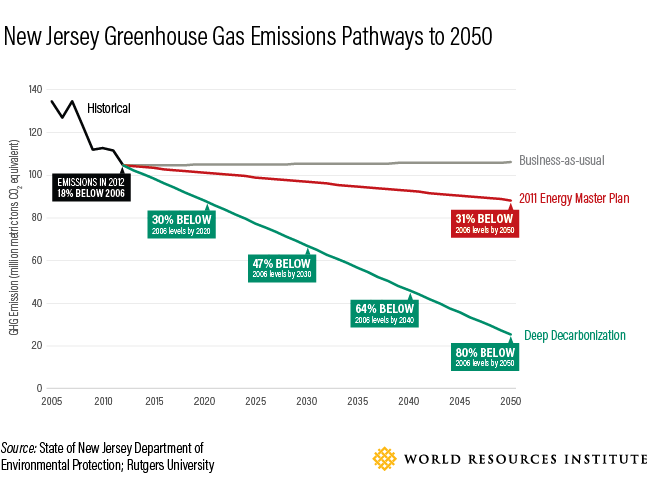 How Can States Plan for Decarbonization?

Last November, the United States released a Mid-Century Strategy for Deep Decarbonization (U.S. MCS), which demonstrates how the country can achieve a low-GHG emissions pathway while meeting the growing demands on its energy system and lands. Included are technological pathways and policy recommendations for the three major sources of GHG emissions:

Of course, each state confronts its own set of challenges and opportunities, but the U.S. MCS gives states an important guide to developing a deep decarbonization strategy that can be tailored to a state’s unique circumstances.

In New Jersey’s case, the most densely populated U.S. state is likely to reap considerable gains from “smart growth” strategies that improve urban development, mass transit and shared mobility. With an economy heavily integrated with its neighbors, New Jersey’s decarbonization plan can emphasize cooperation with other states, including existing inter-state programs such as the Regional Greenhouse Gas Initiative  and the Transportation and Climate Initiative.

New Jersey also has significant advantages in transitioning to a low carbon power sector: half of the state’s electricity production already comes from zero carbon sources (compared to one-third for the U.S. as a whole), and the coastline gives New Jersey the opportunity to satisfy a significant portion of its electricity demand with off-shore wind energy. On the other hand, off-shore wind must overcome the hurdles that have hindered the technology’s deployment thus far (e.g., high costs, lengthy regulatory processes), and New Jersey’s nuclear power plants may shut down without near-term policy support, which will make deep decarbonization more expensive and challenging to achieve.

Decisions made today will influence economies in 2050, and states that act decisively now will have a leg up in achieving cost-effective emissions reductions and exporting low carbon goods and services to the rest of the world. Under a new governor in 2017, New Jersey has a prime opportunity to become a leader on climate action. A good first step would be to develop a detailed and comprehensive plan for deep decarbonization. An even better second step would be to implement that plan, using the broad range of tools discussed in the report.