INSIDER: Not All Electricity Is Equal—Uses and Misuses of Levelized Cost of Electricity (LCOE)

The levelized cost of electricity, or LCOE, is an often-misused measure of electricity generation costs. It is the average cost of producing a unit of electricity during a generating plant’s lifetime. Because of its simplicity and visual appeal, LCOE makes frequent appearances in the media. It is sometimes used to argue that investors or utilities should build more of the generation technology with the lowest LCOE. This approach misses a big part of the picture: the value side.

Not All Electricity Is Created Equal

What Does LCOE Measure?

LCOE attempts to measure all costs of producing electricity, from the cost of financing and building a power plant to lifetime operations and maintenance, decommissioning and the cost of carbon emissions. In many cases, this information is not easily available, so published LCOEs often ignore project-specific cost variations such as differences in interest rates, site-specific or environmental costs, and uncertainty over future fuel prices. Because of this, Lazard, an investment bank, provides detailed caveats and context around its popular yearly LCOE reports. Like investors, environmental analysts and journalists should pay attention to the fine print. 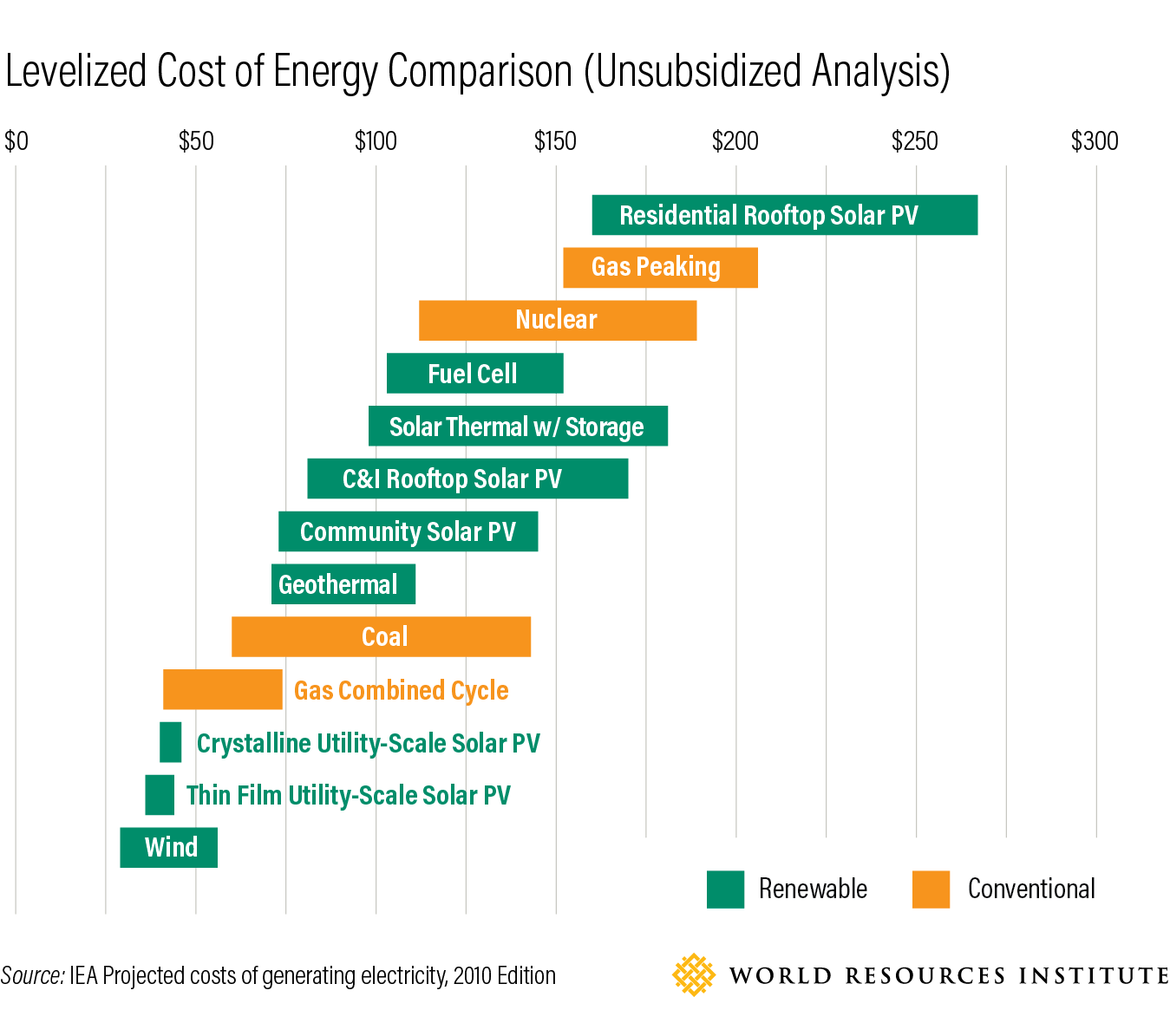 When Is LCOE Useful?

An investor or utility considering which baseload plant to build on a given site—such as a coal versus a combined-cycle natural gas plant—can use an LCOE analysis to rank options. All the technologies provide similar services to the grid, as they are all designed to run almost continuously. The costs of the site and connection to the grid are also similar. Even in this simple case, some care is needed. Fuel cost uncertainty varies across fuels and is not measured by the LCOE.

LCOE can also be used to track costs of a specific technology over time, with some care. Users should check that all relevant factors are included in the LCOE calculation. For example, while some analyses explicitly include site-specific costs like installation and grid-connection fees, lack of data pushes others to focus only on the costs of technology. Users of the LCOE metric should keep in mind that even within the same technology, the value of a new unit of generation may change over time, especially for intermittent renewables.

And When Is LCOE Not Useful?

LCOE is not useful to compare the costs of technologies if non-measured costs differ significantly or if the technologies provide different services to the electricity system.

For example, if site-specific costs are left out of the LCOE metric, it will not reflect relative costs correctly. The value of the site will depend on its size and location. In some areas wind will blow or the sun will shine more, lowering the cost of each kilowatt of electricity generated.

Further, different technologies may generate electricity at different times of the day and year. A unit of electricity is more valuable if it is produced when demand is high and alternative sources of generation are expensive. Technologies that can provide electricity at any time tend to generate when it is most valuable, as it leads to larger returns. Intermittent renewable sources, such as solar PV and wind, generate in response to the weather rather than to market signals. An electricity system operator trying to match generation and consumption in every moment cannot rely on them always being available at times of high demand, a consideration that is not included in the LCOE metric.

Is There a Better Approach?

In conclusion, the LCOE metric cannot be used to fully compare generation technologies. Given the complexity of electricity systems, in many cases the LCOE metric will provide answers that are simplistic rather than simple. It may be better to focus on increasing the transparency of more complex analyses and clearly communicating how systems with different technology mixes fare across the multiple goals of electricity services: affordability, sustainability and reliability.