Residents of Indonesia and Singapore have been bracing themselves in recent weeks as WRI and others have warned that this year’s dry season would likely herald a severe spike in fires on the island of Sumatra and accompanying toxic haze across the region. As dry weather sets in, with a high chance of a fire-fanning El Nino, NASA’s Active Fires satellite system has detected an alarming numbers of hotspots in recent days, especially in Riau Province, the location of the majority of fires in severe fire and haze episodes last June and early this year.

As described in WRI’s previous analyses, fires are a long-standing problem in many parts of Indonesia. The fires, which are often used to clear land for agriculture, generate toxic air pollution and can easily get out of control. Although the causes of these fires are complex, they are often attributed to companies clearing land for oil palm or other plantations, small farmers clearing land for cultivation, or communities which may use fire as a weapon in conflicts with companies or the government.

Figures 1, 2, and 3 below show the districts and subdistricts in Riau with largest numbers of high-confidence fire alerts over the past week. As in February this year and June last year, fire alerts are overwhelmingly concentrated in the districts of Bengkalis, Rokan Hilir and Pelalawan. 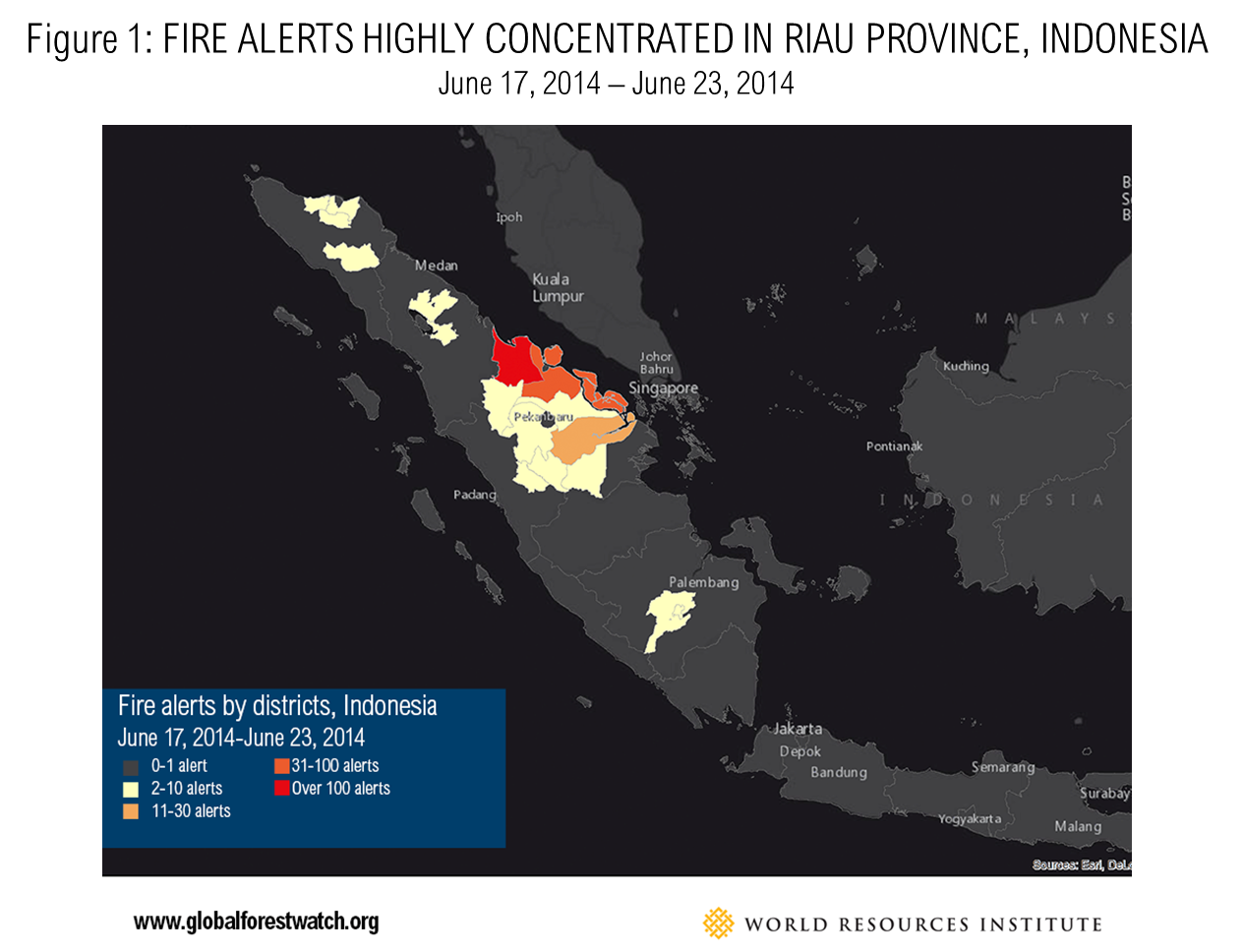 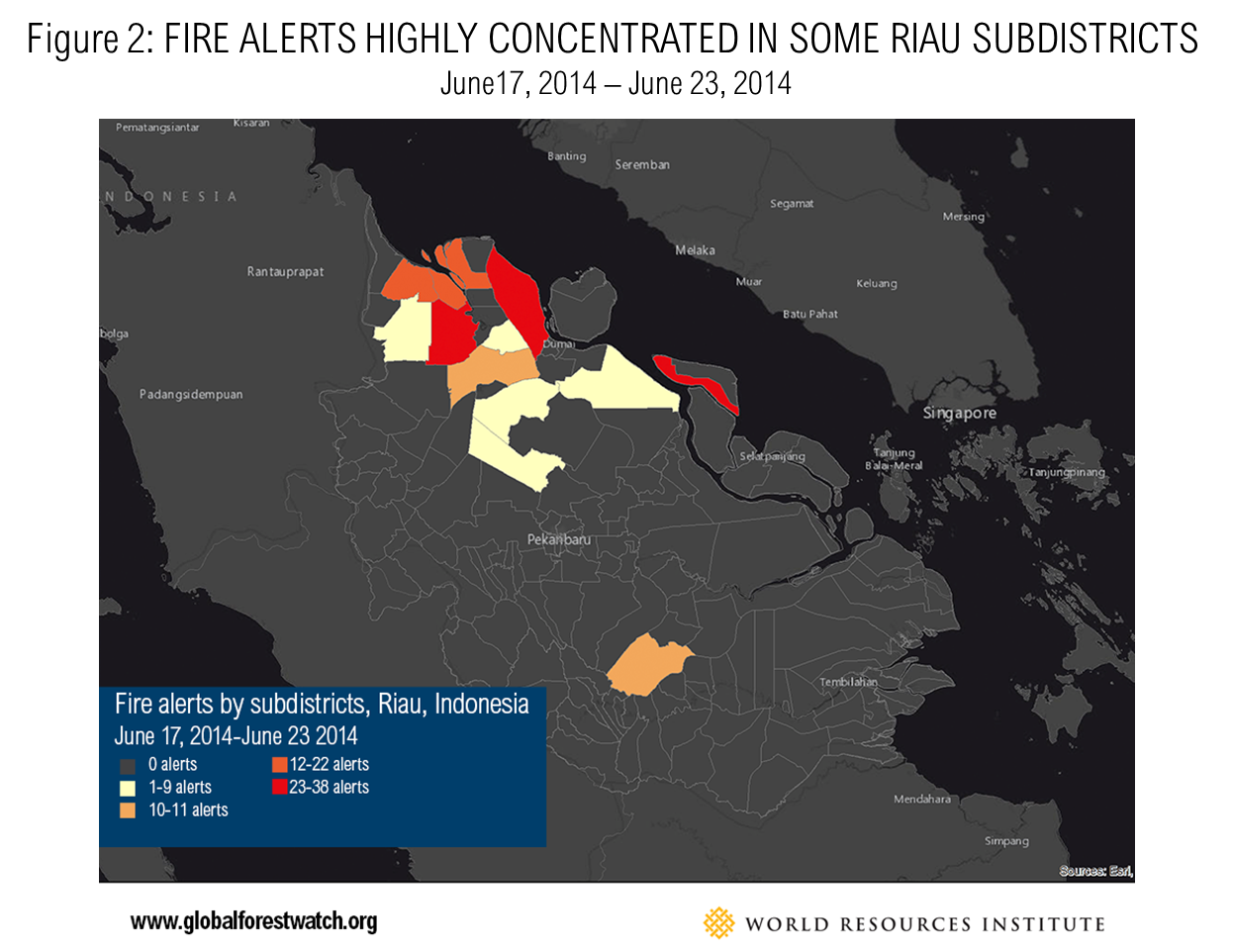 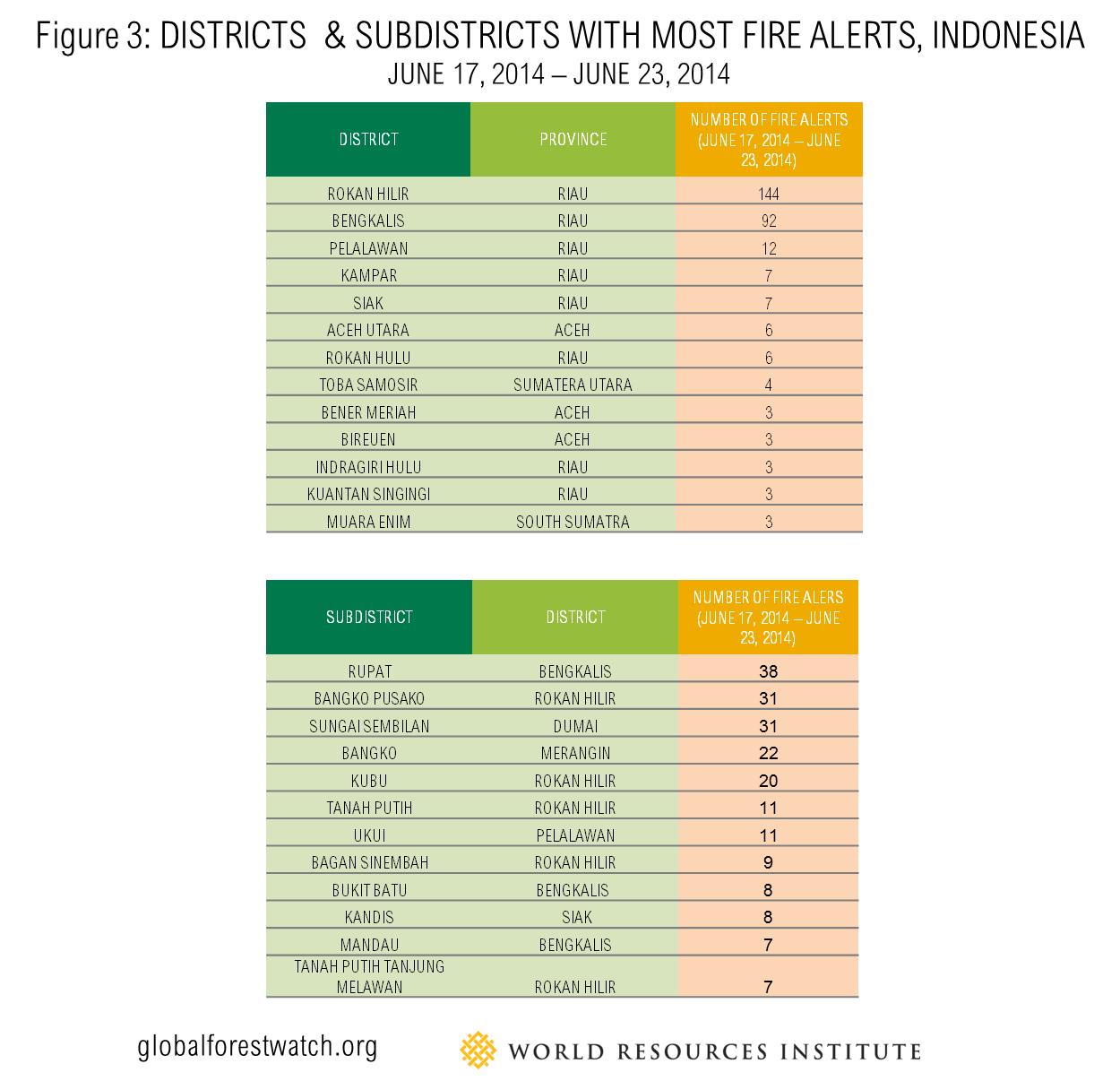 Many fires are in concessions

Figures 4 and 5 below show which pulpwood, palm oil, and logging company concessions also show the largest numbers of high-confidence fire alerts within their boundaries. Many of these have also seen high numbers of fire alerts in the past. 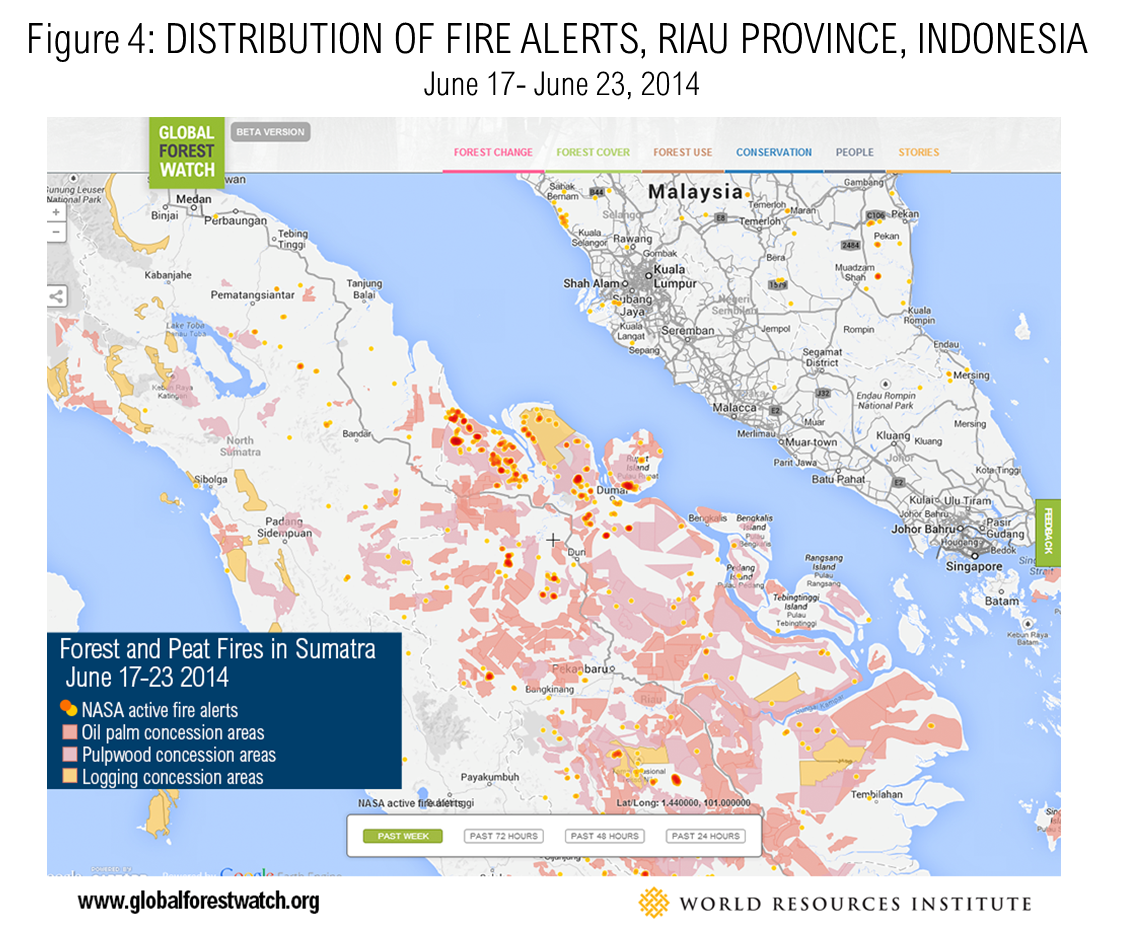 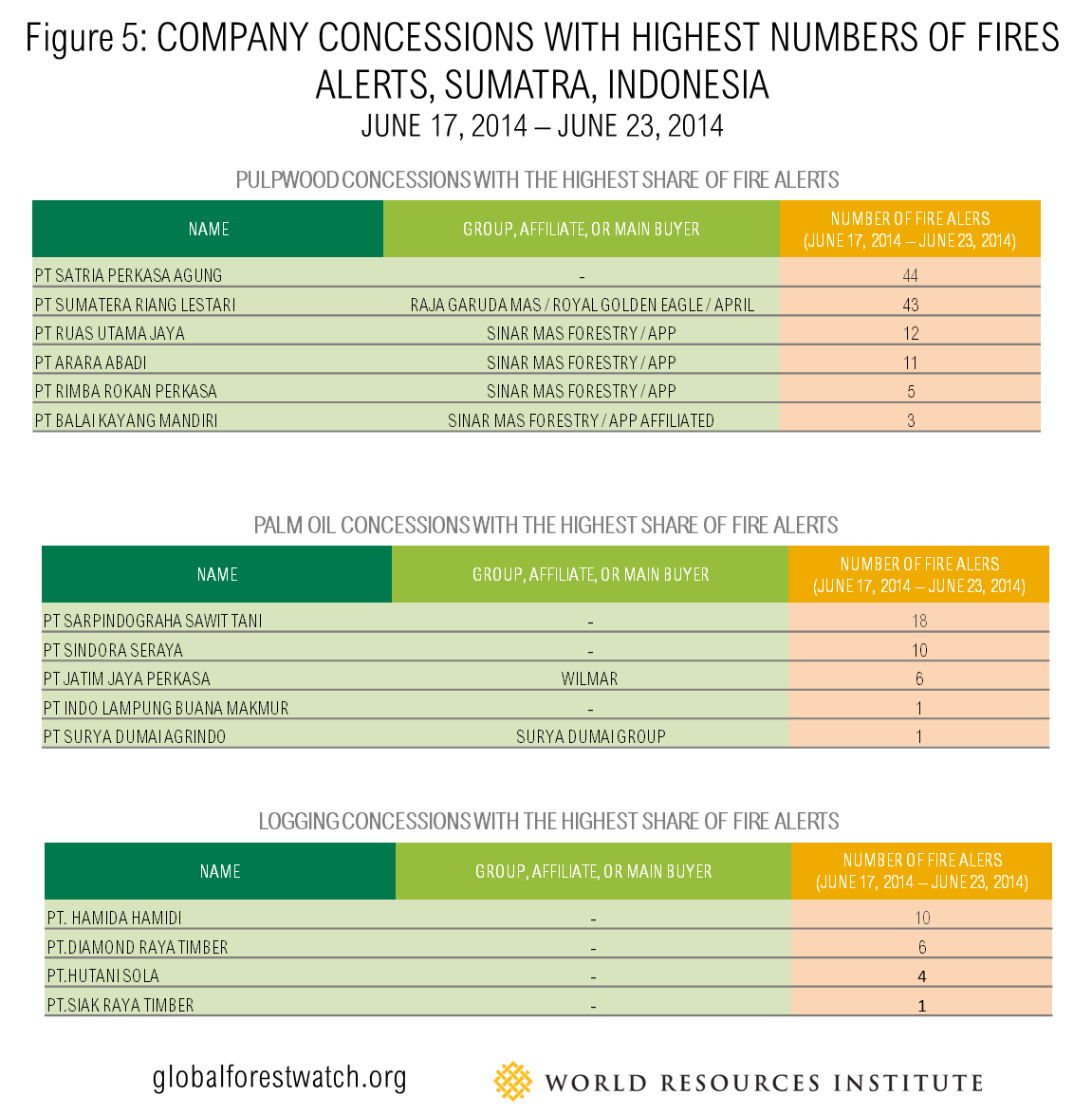 Editor’s note: Figure 5 has been updated with new information regarding the affiliation of one of the concessions of pulpwood company PT Satria Perkasa Agung. An earlier version of this post listed Sinar Mas Forestry / APP as the company’s “Group, Affiliate, or Main Buyer.” APP has notified WRI that it is not affiliated with that concession of PT Satria Perkasa Agung.

The good news is that policymakers in Indonesia have started to heed earlier warnings about the fire risk. Indonesia’s Vice President Boediono has convened senior ministers from several agencies and a special “situation room” is reportedly being established to help ensure a more coordinated response. Such efforts should now be redoubled to ensure fire-fighting capabilities are on hand to respond within hours when new hotspots are detected. Fires left unattended will otherwise quickly spread, making fire-fighting extremely costly, largely ineffective and dangerous.

As WRI has stressed in the past, the key step needed is to take interagency coordination and resource commitment a step further and work to address the underlying causes of the fires, while also greatly enhancing enforcement efforts, which have been severely under resourced. WRI’s recommendations are summarized in early analyses here.