How Much Rainforest Is in That Chocolate Bar?

With the world’s appetite for chocolate at an all-time high, producers are looking for new places to grow cacao—the raw ingredient in cocoa and chocolate. Some are turning to South America, where satellite images show one cacao plantation encroaching dramatically on the Amazon rainforest.

Historically, much of the world’s cacao has come from West Africa, but aging trees, crop diseases, pests, extreme weather and political instability make it difficult for the region to keep up with demand. As production expands in South America, Peru in particular has seen a nearly five-fold increase in cacao production between 1990 and 2013. The most recent estimates from FAO and the International Cocoa Organization rank Peru as now being among the top ten cacao-producing countries in the world. 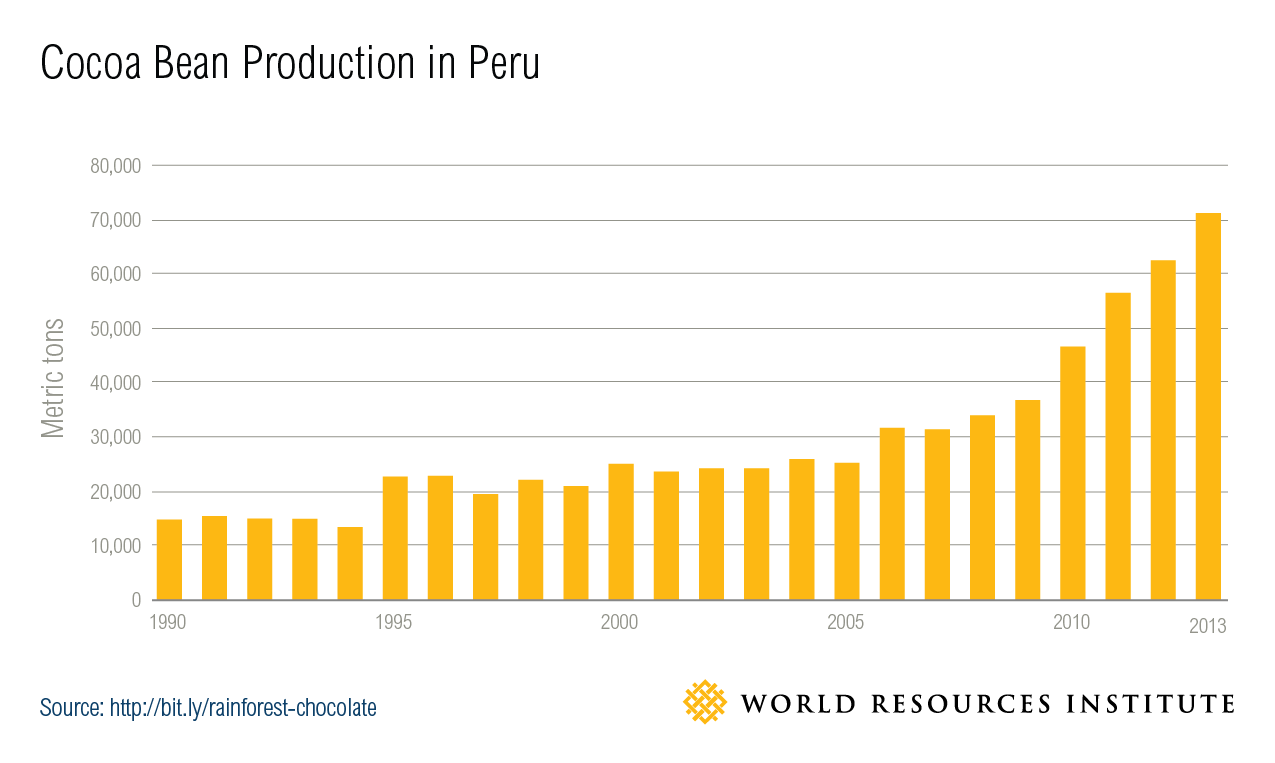 As cacao production accelerates in Peru, the Amazon rainforest is becoming a target for cultivable land, and at least one new cacao-production company has already cleared thousands of hectares of carbon-rich, biodiverse forest. This is not novel: Countries like

To reduce their environmental impact, companies must first accurately measure it. However, limited data and methodological complexities used to calculate emissions from land-use change (in this case, conversion of non-agricultural land to agricultural land for cacao production) present a hurdle. Though lifecycle emissions analyses for chocolate production exist, most do not include emissions from land-use change resulting from the establishment of new cacao production areas. Or, if they are included, estimates are rough.

Cadbury estimates that 169g (6 ounces) of carbon dioxide equivalent are emitted into the atmosphere for each 49g (1.7 ounce) Dairy Milk chocolate bar. This calculation includes emissions from the production of raw ingredients such as cocoa, cocoa butter, milk and sugar, and from packaging and distribution, but not from land-use change.

In 2012, United Cacao began deforesting 2,000 hectares (nearly 5,000 acres) of carbon-rich Peruvian rainforest for a commercial cacao plantation. Despite its secluded location deep in the Amazon, NASA satellite images enabled researchers to collect data needed to estimate the resulting carbon emissions. Matt Finer of the Amazon Conservation Association used Landsat imagery to chronicle the clearing month-by-month and prove that the area was previously primary forest. Meanwhile, Greg Asner of Stanford University’s Carnegie Institution for Science used airborne LiDAR technology to estimate that the patch of forest contained an average of 122 metric tons of carbon per hectare (54.4 tons per acre).

Research suggests that United Cacao’s plantation will store, on average, about 40 metric tons of carbon per hectare (about 18 tons per acre) over its production lifetime, meaning that over the deforested 2,000-hectare (approximately 5,000-acre) area, the net carbon emissions from land-use change will be 0.6 million metric tons (more than 660,000 tons) of carbon dioxide—about the same emissions as driving a car around Earth 60,000 times. 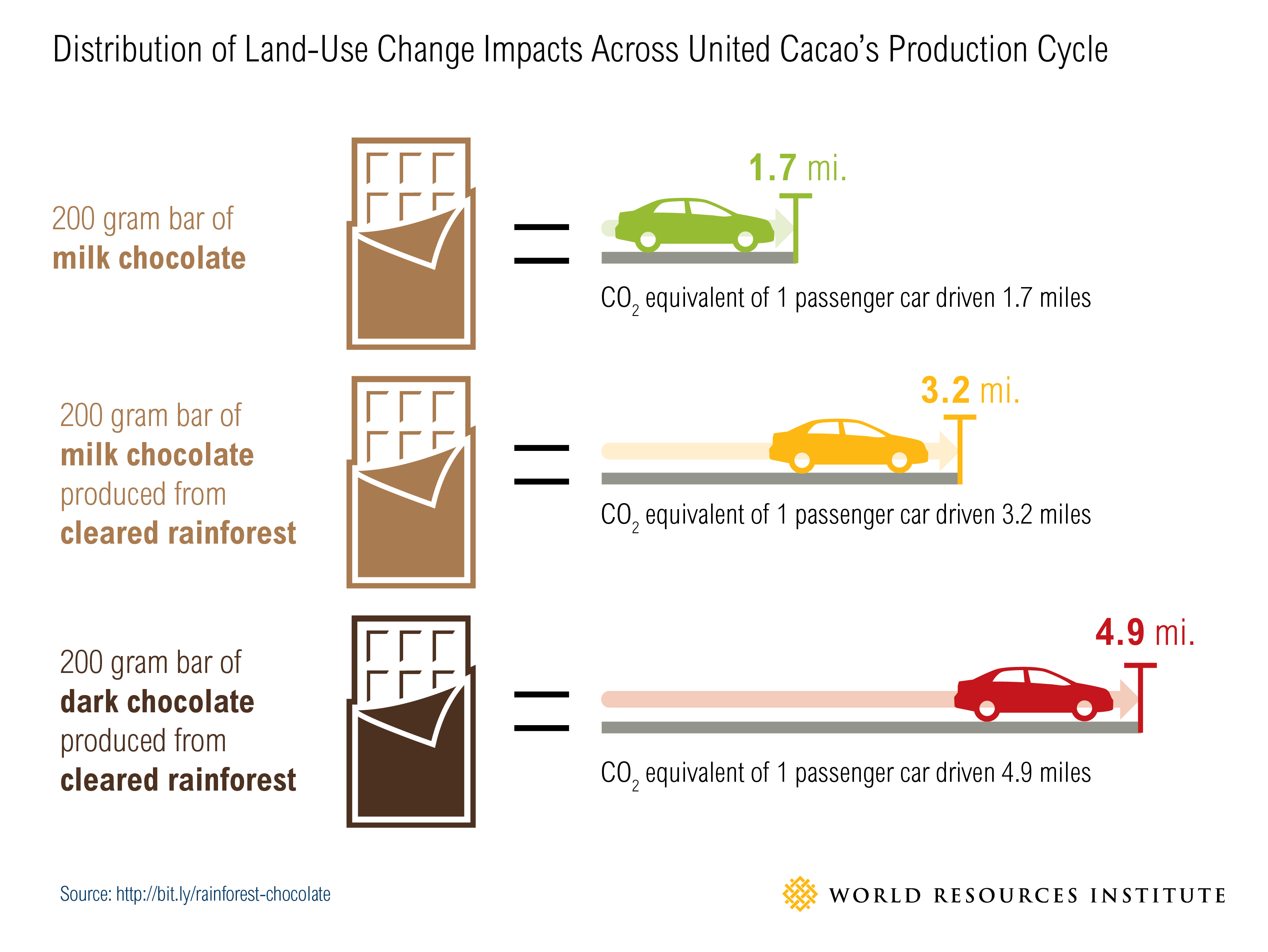 Chocolate and the Environment: Finding the Sweet Spot

It doesn’t have to be this way. Cacao expansion in South America presents a major opportunity for agriculture-driven restoration. Planting cacao on degraded lands could support

Tambopata Candamo, a project of Tambopata REDD in Madre de Dios, Peru, provides a good example. Tambopata Candamo is a cooperative of cacao farmers that exchanges zero-deforestation commitments for financial backing and Fairtrade certification. This allows farmers to generate enough revenue from carbon offsets to repay investors and make a profit, in addition to profiting from cacao.

As global cacao demand climbs and production shifts to new areas, producers should abide by sustainability standards like those set by the Sustainable Agriculture Network to help avoid unnecessary emissions from land-use change. Satellites can help quantify greenhouse gas emissions and thereby increase transparency around the impact of land and forest conversion for cacao production. This, in turn, allows for better monitoring of cacao expansion with tools like Global Forest Watch to catch risky activity and help measure the success of corporate commitments to protect forests. With such powerful tools, we can all keep an eye what’s happening in the forests and help ensure the future for chocolate production is sweet.

Technical Note: How Much Rainforest Is In That Chocolate Bar?