This week’s United Nations General Assembly in New York City gives denizens of “Development World” the chance to update their mental maps of how forests contribute to the Sustainable Development Goals (SDGs). As argued in our book, Why Forests? Why Now?, there’s good reason to do so: forests are an overlooked and undervalued asset in the struggle to achieve these goals. Here’s why.

Most people are already familiar with the contributions of forest products to local welfare and the role of forest services in meeting global objectives. Wild fruits, nuts, mushrooms and bush meat supplement diets (SDG 2), and medicinal plants are often a first recourse for illness (SDG 3). Forest products supply more than 20 percent of the household income for local families (SDG 1), and tropical forests shelter most of the world’s terrestrial biological diversity (SDG 15). And, as a safe, natural means of carbon capture and storage, forests are increasingly recognized as an essential element of any strategy to stabilize our climate (SDG 13). 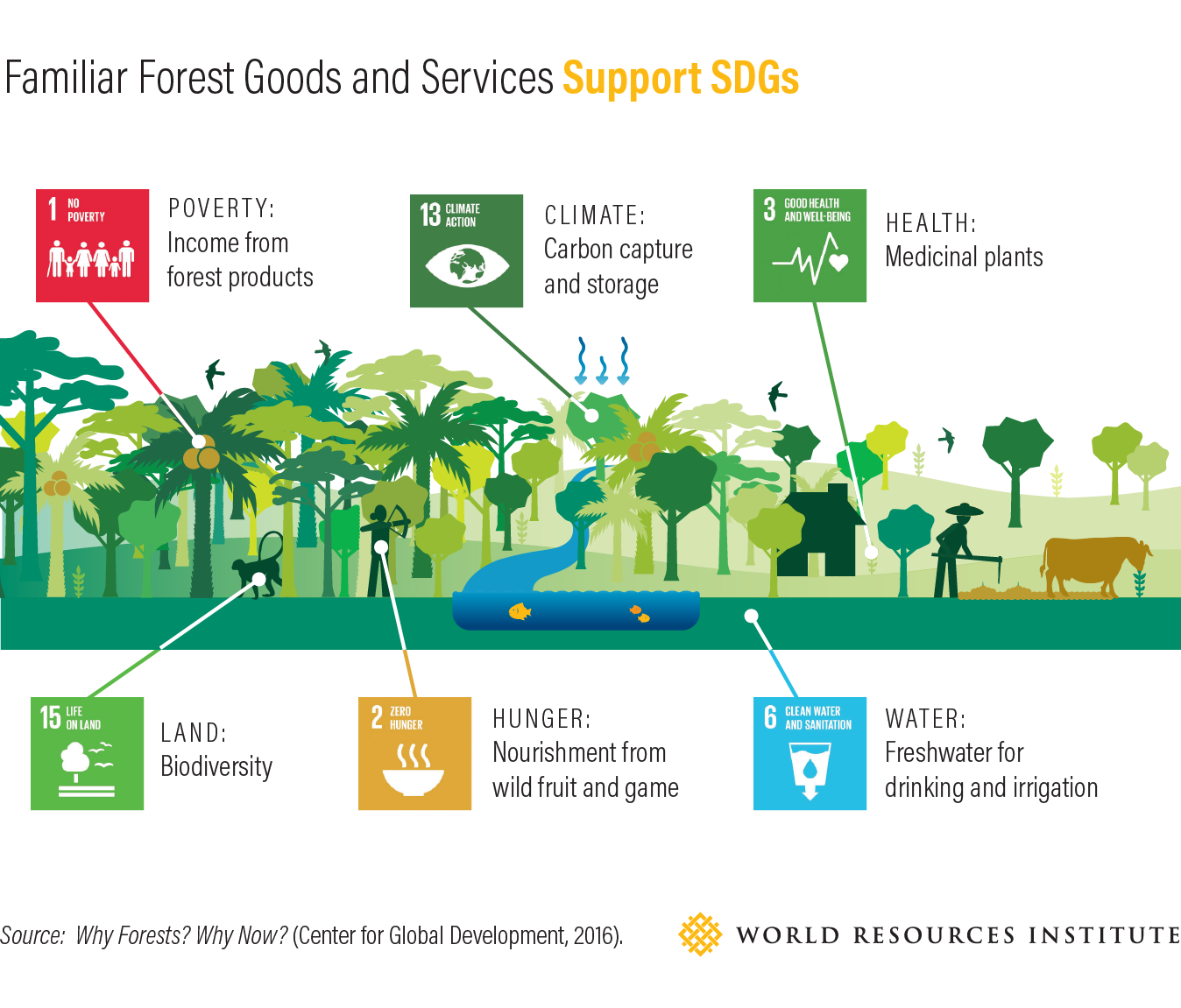 Somewhat less appreciated are the mostly invisible ways that forest-based ecosystem services contribute to development objectives, and how deforestation can undermine their achievement.

While many attempts have been made to mobilize forest goods and services as a pathway out of poverty for rural communities, not enough attention has been given to deforestation as a highway to pauperization. Conversion of forests to other land uses eliminates income from wild products, and leaves landscapes less resilient to landslides, floods and other natural disasters―events that can damage brick-and-mortar infrastructure (SDG 11) and set back income growth for decades (SDG 1). 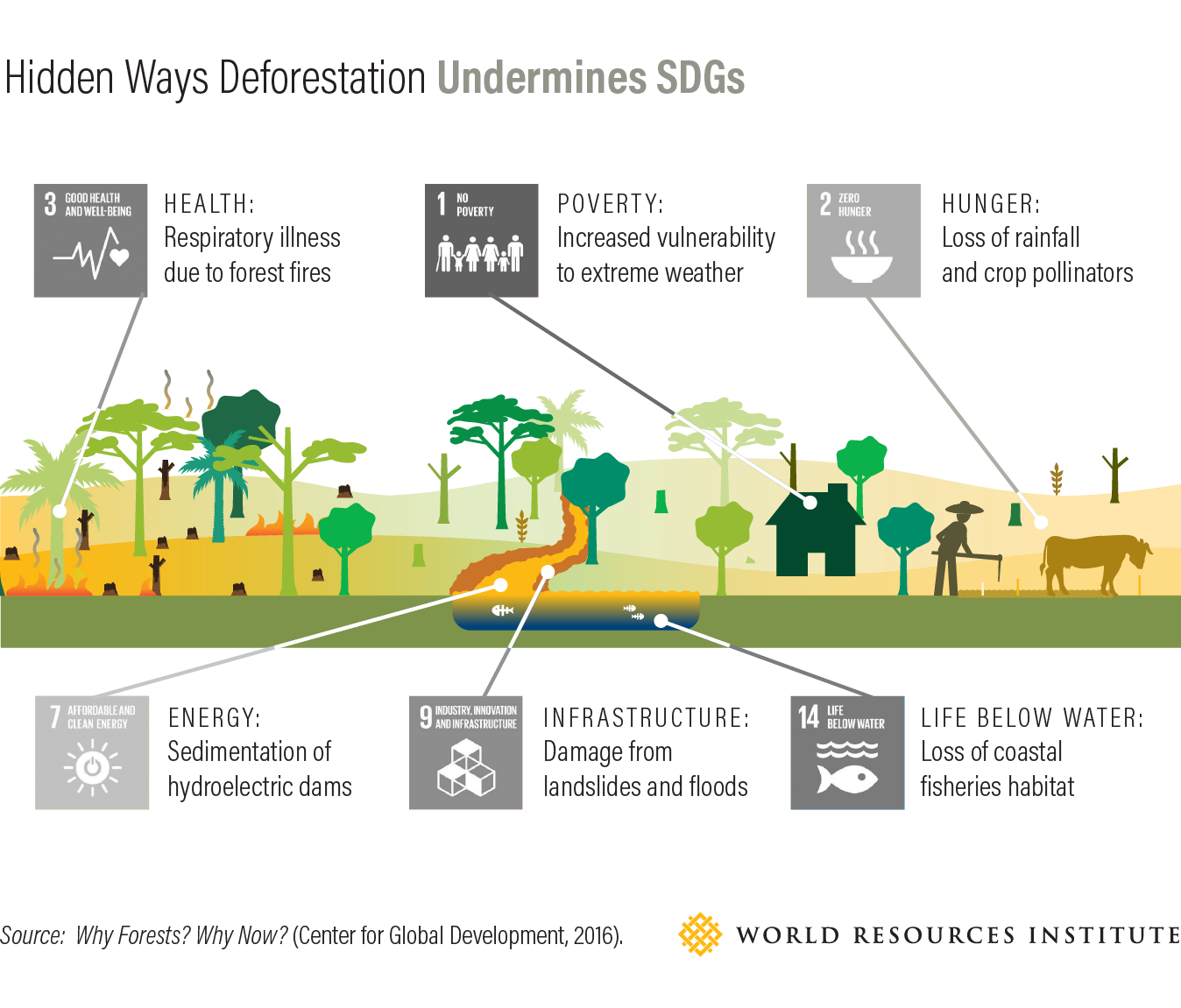 Moreover, deforestation removes the vital hydrological services of forests upstream, which support additional development goals downstream. Without trees and shrubs to filter dirty water, pathogens and pollutants spread, causing disease (SDGs 3 and 6). Forest destruction can adversely affect respiratory health, as well: researchers estimated that the particulate-laden smoke from the catastrophic fires in Indonesia in 2015 resulted in more than 100,000 premature deaths. In addition, deforestation has been linked to increased incidence of malaria.

By removing natural barriers to erosion, deforestation also threatens access to clean energy (SDG 7) by speeding the sedimentation of reservoirs behind hydroelectric dams. Sedimentation of the Péligre Dam in Haiti, for example, cut the country’s electricity consumption in half between 1990 and 2010.

The role of forests in advancing the SDG related to “Life on land” (SDG 15) is obvious, but most people would be surprised by forests’ contributions to “Life below water” (SDG 14). Mangroves provide nurseries for coastal and offshore marine fisheries. Forest loss in the Mekong River Delta has been paralleled by losses in fishery production. In addition, forests provide a sink for carbon that would otherwise contribute to ocean acidification.

Forest Protection Can Be Aligned with Further SDG Progress

The good news is that reducing deforestation can advance efforts to improve equity and accountability. Despite many examples of outdated forest conservation and exploitation causing harm to vulnerable peoples, more progressive approaches to forest protection can safeguard, and even advance, their interests.

Take gender equity (SDG 5), for instance. Recognizing the non-timber value of forests as sources of income and employment disproportionately important to women―such as gathering and processing fruits, nuts and resins―can reduce the risk of worsening gender inequality through interventions favoring land and tree uses more important to men.

More broadly, actions to reduce deforestation can align with improvements in governance and social justice (SDG 16). Through national and international climate (REDD+) policy processes, indigenous communities―whose presence is associated with a higher likelihood of maintaining forest cover, and whose territories contain more than 20 percent of the carbon in tropical forests―have advocated successfully for greater recognition of their rights. The government of Indonesia, for example, has begun to grant legal status to previously unrecognized territories.

Deforestation is often associated with corruption and violence, while successful efforts to address it have relied on increased transparency and imposition of the rule of law. Brazil’s success in reducing deforestation in the Amazon by some 80 percent from 2004-2014 was based in part on improved forest monitoring technology, which strengthened law enforcement efforts against illegal logging and aided the prosecution of corrupt government officials.

The case is clear: if you care about the SDGs, take a second look at forests. Forests’ contributions are not limited to local livelihoods and global environmental objectives, and stopping deforestation contributes to many other development goals at scales in between. Sectoral policies and finance for achieving the SDGs shouldn’t miss the forests for the trees.

Forests Deserve More Respect When It Comes to Climate Action

Indigenous Communities Fend Off Invaders in the Peruvian Amazon

With Superstorms Like Hurricane Irma Increasing, How Can Vulnerable Countries Prepare?