Solar photo-voltaic (PV) installations have boomed globally since 2010, with an annual growth rate of 40 percent. China is leading that growth: it ranks first since 2015 in both installed capacity and power generation.

By 2017, China had 130 gigawatts of solar PV to the grid—nearly six times the capacity of the Three Gorges hydroelectric plant, the largest in the world. Furthermore, the nation achieved its 2020 goal for solar two years ahead of schedule. 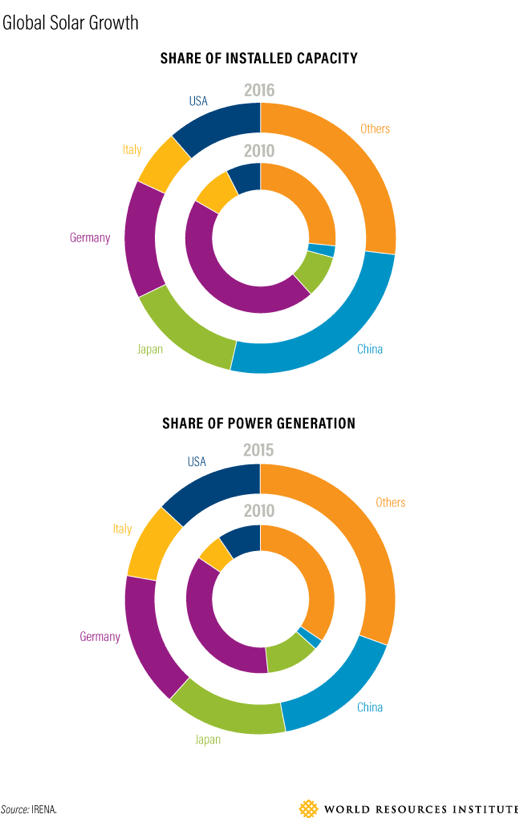 Distributed solar PV has been installed mainly in east and south China, where the country’s economy is most prosperous and demand for power is greatest. About 52 percent of capacity is in four provinces: Zhejiang, Shandong, Jiangsu and Anhui.

There are four main reasons that distributed solar PV is growing faster than ever:

According to the 13th Five Year Plan of Solar Power Development, issued in 2016, at least 60 gigawatts of distributed solar PV will be installed by 2020, at a rate of 10 gigawatts of capacity each year. Over the same period, 100 demonstration zones of distributed solar PV will be constructed, with 80 percent of new building rooftops and 50 percent of existing building rooftops equipped with distributed solar PV systems. In addition, China launched a Solar PV for Poverty Alleviation Program in 2014, which supports a large share (70-80 percent) of the initial investment and allows families to use power freely or sell it to the grid.

To achieve its national targets, China has issued a series of incentive policies since 2013 that covers both national and sub-national levels. The most influential of these provides a growth in subsidies for distributed PV solar systems.

In addition to the national solar subsidy, now 0.32 Yuan ($0.049) per kilowatt-hour (kWh), local governments—10 provinces/municipalities, 36 prefecture-level cities and 10 county-level cities/regions—have their own subsidy policies for distributed solar PV projects. Many of these areas produce solar panels locally and have their own targets in place for renewable energy expansion. Subsidy rates and duration vary from region to region; local subsidy rates range from 0.05 to 0.55 Yuan/kWh (USD 0.0077-0.0846/kWh), lasting from 2-20 years.

Declining costs also make distributed solar PV projects more attractive for private companies. The average price of global PV modules decreased by 79 percent from 2010 to 2017; at the same time, technological improvements led to significant increases in efficiency. Influenced by these factors, the average cost of solar power generated in China in 2017 was about 0.5 Yuan/kWh (USD 0.077/kWh), a 75 percent drop from 2010. The continuous decline in cost has attracted more companies to invest in distributed solar projects.

China’s electricity rates for industry and commerce are much higher than those for households. Thus, if businesses install distributed solar PV to generate power for themselves, they can achieve considerable savings. Other diversified applications are emerging, too. “Solar PV+”, or solar PV integrated with agriculture, solar PV fisheries and solar PV livestock operations show the potential ahead.

Despite the remarkable success of China’s solar policies, recent updates have brought huge uncertainty about whether distributed solar PV projects will continue to boom.

In light of the new situation, distributed solar PV project developers may have three options: 1) Rely on existing local subsidies. However, these may expire in coming years, and it is not clear whether they will be extended. 2) Wait for next year’s quota of national subsidies, which have not been announced yet. 3) Develop projects without subsidies.

New pilot programs may offer opportunities amid the challenges. National Energy Administration (NEA) initiated a pilot program on peer-to-peer trading of distributed generation, which could be a win-win for both power producers and consumers. Three modes were proposed for the pilot: direct sales, in which generators sell distributed power directly to consumers and pay a dispatch fee to grid companies; entrust sales, whereby grid companies sell distributed power to consumers on behalf of generators; and sales to grid, in which generators sell power to grid companies at the same rates as feed-in tariffs for local, large-scale solar power stations.

From Coal to Renewables in China: Solving the Water Stress-Power Plant Mismatch

The Rise of the Urban Energy “Prosumer”