Delhi choked under a thick blanket of toxic air last month. The government's pollution control authority declared a public health emergency, and the city's action plan kicked into effect, although its impacts were limited. Many international news outlets covered the crisis, but few captured the full complexity of the problem.

Delhi's rapidly growing industry and transport sectors emit high levels of pollutants throughout the year. However, the city's air pollution reaches crisis levels during the crop-burning season in October and November. Solving Delhi's air quality woes will require a whole range of solutions. But one known measure that could provide more immediate relief during the worst months is reducing crop burning — not just by banning the practice, but by giving farmers viable alternatives.

The northern Indian states of Punjab and Haryana produce a significant portion of India's wheat and rice. Burning crop stubble left at the end of a growing season has historically been part of the states' farming cycles in order to clear rice fields before sowing wheat in the winter. However, recent policy changes have shifted the timing of this cycle, with serious unintended consequences.

In an effort to conserve groundwater during the dry season, the Punjab state government passed a law in 2009 mandating that farmers delay sowing rice until June, a two-month delay from the traditional April start. The shift accomplished its goal: Fields were irrigated with monsoon rains and groundwater depletion was reduced. The success prompted neighbouring Haryana to pass a similar law. However, the crop burning, which used to take place in September, now occurs in late October, by which time wind patterns shift and carry dangerous levels of fine particulates, or PM 2.5 and the larger PM 10, over Delhi. 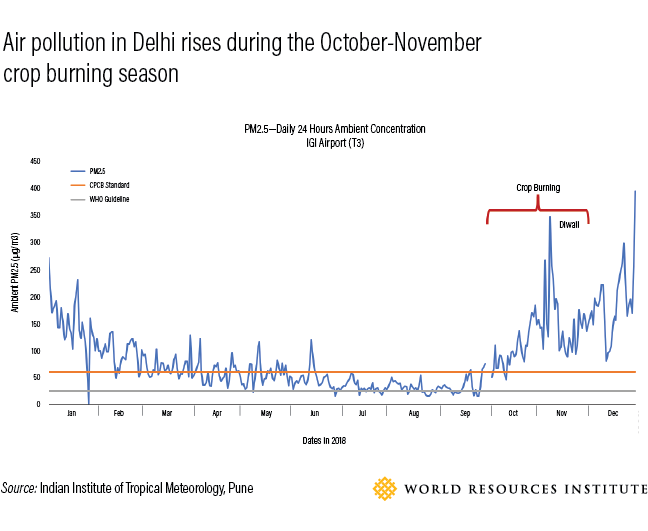 In 2018, a total of 62,000 farm fires were recorded, and this number might be increasing. Early estimates indicate that farm fires in 2019 contributed up to 44% of Delhi's air pollution in early November. On November 3, 2019, air quality maps from the World Air Quality Project showed PM 2.5 levels in many parts of Delhi were over 60 times greater than the World Health Organization's guidelines for safe levels of exposure.

Air Pollution Is Both a Health Hazard and an Economic Risk

The World Health Organization estimates that air pollution is responsible for about 7 million premature deaths worldwide every year. It is the largest environmental risk affecting people's health around the world. In 2017 alone, India saw about 1.24 million deaths attributable to air pollution.

Air pollution is not only an environmental hazard — it has serious economic implications. The OECD finds that if current trends continue, air pollution will reduce global economic output by around $330 per person by 2060. This is because related healthcare costs are projected to rise to $176 billion annually, and the number of work days lost to related illnesses would jump to 3.7 billion. The OECD study explains that the highest projected GDP losses due to air pollution are expected in India, as well as in China, Russia, and other emerging economies.

Potential solutions do exist for the issue of stubble burning, which can help both the farmers in Punjab and Haryana as well as everyone downwind of the fires.

It's Not Just Farmers Who Must Reduce Delhi's Air Pollution

For a lasting solution, Delhi must pivot toward a model of sustainable urban development, learning from other cities who have had to grapple with the challenge of a rapidly developing urban society.

For example, Mexico City implemented air quality programs in the 1990s that combined regulatory measures and technological investment. The city coordinated with state governments to develop a comprehensive program. They created a system to alert citizens 24 hours in advance about any high pollution spikes and sources of those spikes. In tandem, they invested in effective mass transit, solid waste management, reduced crop burning and more sustainable energy measures. As a result, Mexico City has managed to halve their air pollution levels.

Similarly, Delhi should reduce emissions from personal vehicles on the road by expanding public transport and other green forms of mobility. Cleaner energy production, better waste management, and alerting citizens in advance about any high pollution spikes can also help.

In a classic example of the butterfly effect, a significant part of today's pollution crisis across northern India can be traced back to fragmented responses to address food security concerns more than 20 years ago. By carefully designing and implementing sustainable development policies that work for farmers, the Indian government can improve air quality and avoid significant environmental, human and economic harm in the future.