The Costs of Climate Adaptation, Explained in 4 Infographics

As global temperatures climb, so do the costs of adapting to a warmer world. Severe weather events are becoming more frequent, creating major budget pressures for national governments, especially those in the developing world. Sea level is projected to rise by 52-98 centimeters by the year 2100, threatening billions of people in coastal communities. And increasing temperatures and shifting weather patterns threaten major economic sectors, such as agriculture, tourism and energy supply.

So how much money will the world need to protect itself from these impacts? And how much money are we currently spending to solve the problem? Here’s everything you need to know about the current state of adaptation finance:

1) The costs are increasing.

Over the last decade, numerous reports emerged with estimates of adaptation needs based on current climate change knowledge, with increasing estimates revealing the uncertainty and evolving scientific knowledge. At the lower end, a 2007 UNFCCC study projected adaptation finance needs for developing countries would start at $28 billion annually by 2030—at the higher end, UNEP recently estimated a maximum need for developing countries of around $300 billion annually by 2050. 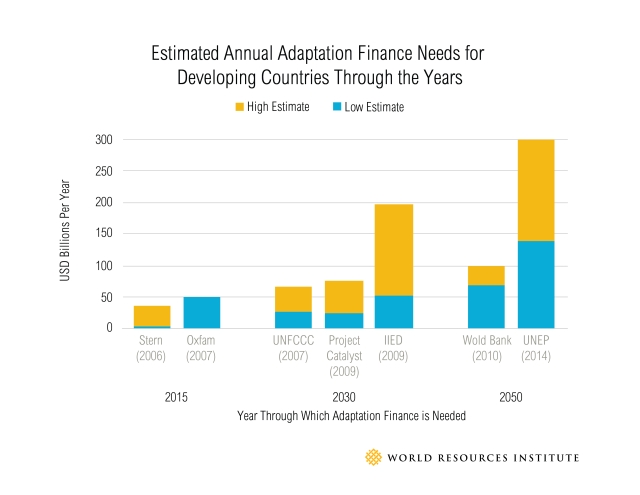 2) Adaptation finance from the public sector is growing.

Developed and developing countries are responding to threats by committing increasing amounts of public finance to adapt to climate change, including from national, multilateral and bilateral sources. In 2010, total public finance committed to help address climate change impacts amounted to $4 billion—in 2013, that figure increased to $25 billion. Also, many countries are increasing their own spending on adaptation, but these figures are not always publicly available. The twenty-first session of the Conference of the Parties this December in Paris (COP 21) will present an opportunity to really accelerate efforts towards adaptation, helping millions of people around the world. 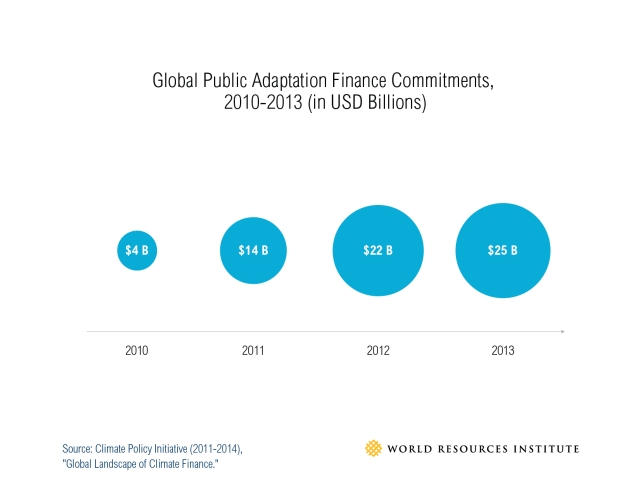 3) There’s still a huge gap between how much adaptation finance we have and how much we need.

The most recent estimates show that the developing world will require $140 to $300 billion a year by 2050 to adapt to climate change. Taking the most recent commitments for adaptation in 2013 and the lowest estimated needs by 20501, adaptation finance will need to increase by 438 percent by 2050.

Mobilizing additional finance for adaptation is one of the most pressing challenges for developing countries; delaying action will mean even higher costs. It’s important to tap into additional public sector finance from developed countries, mobilize private sector finance for adaptation and increase national spending in developing countries. The Paris negotiations need to help this mobilization process move forward as quickly as possible. 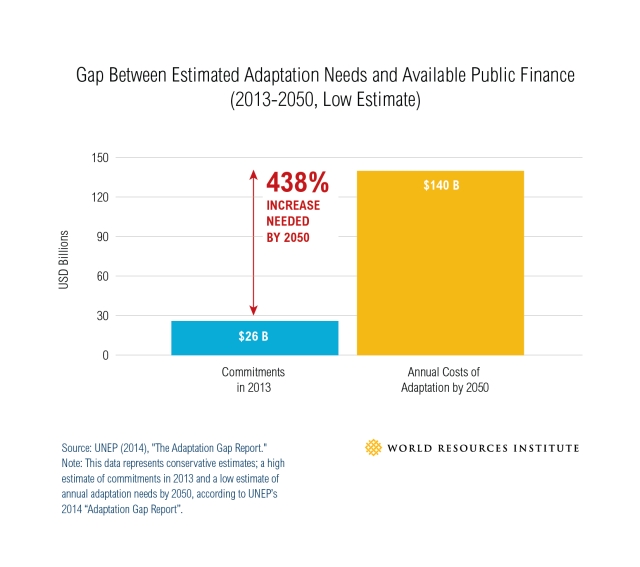 4) Most climate finance goes to mitigation.

Back in 2009, developed countries pledged to provide $100 billion in climate finance annually by 2020. Donors did not specify how much would go to adaptation verses mitigation, but that it would be done in a balanced way from public and private sources. The lack of specificity is a problem because donor countries cannot be held accountable to provide a determined amount to either activity. In 2013, less than one-quarter of total public climate finance—about $25 billion—went to adaptation.

Even more significant is the fact that mitigation receives almost twice as much finance from the private sector as from the public sector—about $191 billion, compared to $111 billion from public sources. However, it is difficult to measure any private investment in adaptation because this information is not officially reported or easily quantifiable. The private sector has an important role to play in adaptation, benefiting the communities in which they operate, reducing risk and ensuring business resilience. 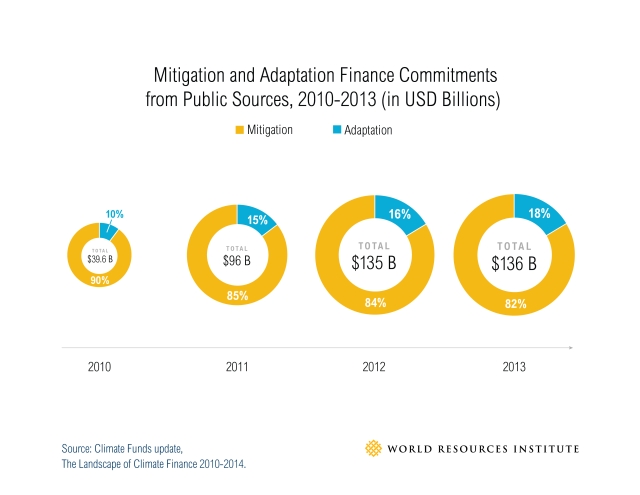 Adaptation Finance Is Difficult to Track

Understanding how much climate finance is channeled to countries is important both for holding donors accountable for their pledges and for identifying how recipient countries are using this money. Adaptation finance is notoriously difficult to track because it is spent at the local level where, in many countries, the web of financial flows from national to local communities is complex, trickling down through many layers of government before reaching its indented target. Definitional issues of what exactly consists of adaptation throughout the budgeting process are also a challenge for donors and governments.

The Future of Adaptation Finance

As the world continues to warm, adaptation needs will only get greater. Understanding what level of finance we currently have, where it’s going and how much more we need is a critical step in helping vulnerable communities overcome the threats climate change poses.

Tracking 2020 Climate Action Pledges on the Road to Paris