The Oxbow conservation area in Central Oregon, owned by the Confederated Tribes of the Warm Springs, has been receiving much more visitors lately. In May 2015, a group of international experts visited the site. But our visit wasn’t that special. The new visitors were fish. Spring Chinook, summer steelhead salmon, bull trout and Pacific lampreys arrived in the John Day River, some having traveled nearly 500 miles from the ocean’s edge. The long-awaited appearance of these fish represents a restoration success story—not only for environmental restoration, but a cultural one.

A History of Degradation

The Oxbow area has had a turbulent history. In an 1855 treaty, tribes across Oregon gave away most of their lands in exchange for rights to resources and the continuance of their cultural identities. These resources included salmon, which had been an inexhaustible resource since time immemorial. Yet as rivers were dammed for hydropower across the state, particularly with the construction of the Bonneville Dam on the Columbia River in 1938, waterways throughout the region became increasingly degraded. Hydropower dams blocked channels for fish. Those fish that made it past the dams had to contend with the outfall of cattle grazing, timber logging and fish canneries. Salmon populations plummeted. The final blow to the Oxbow portion of the John Day River came in 1939, when gold was discovered. Miners diverted the river, cut deep into its bed looking for gold and made piles of waste.

The loss of fish was a huge blow to local tribes and the environment. Salmon play an important role in the ecosystem of the northwest, returning ocean nutrients to the rivers and streams where they were born and feeding wildlife. Historically, the Columbia River Basin, which contains the John Day River and separates Oregon from Washington state, provided 13,000 miles (21,000 km) of streams and rivers for 10 to 16 million fish to traverse and reproduce in. In recent years, only about 4,000 stream miles (6,400 km) are passable by fish, as many rivers have been dammed and others silted over by eroded soils from cleared lands. This has occurred despite many salmon and steelhead on the river being protected under the Endangered Species Act. As the land and rivers has been degraded, so has the culture of the native tribes.

Now, though, the John Day River is returning to life. A $6 million restoration project, started in 2011, is leveling the earth, re-digging water channels, laying tracks of wood and caring for thousands of trees, plants and shrubs along a two-mile stretch of river.

The landscape is changing. Small shade plants are keeping river waters cool and providing habitat for fish. It still isn’t a pristine natural area, but it isn’t a mining dump either. Eventually, the project—slated to run until 2016—will restore and safeguard around 20 percent of the river’s fish-spawning potential.

How Did Restoration Happen?

This particular restoration project is already yielding encouraging results. The story of how it came about—and how it achieved success—is a bit more complicated. Three observations can be made:

Restoring the area around the John Day River was and is a highly political issue. The hydropower company operating in the region, Bonneville Power Administration, markets electrical power from 31 federal hydro projects in the Columbia River Basin. One-third of the electric power used in the Northwest comes from BPA.

After years of conflict, four Tribes in the Columbia River Basin agreed to drop their lawsuit against BPA in 2008, which sought major changes in management of the Columbia River hydroelectric systems. In exchange, they received a $900 million settlement from BPA to increase native fish populations across the river basin through fish hatcheries and habitat improvements. From this pool of funds, the Oxbow Conservation group drew $2 million for restoration. They also sourced resources from various Oregon State funds, the Oregon Watershed Enhancement Board and lottery funds, again drawing on the tribal importance of the land.

2) Collaboration is key in the face of conflict

The current restoration project utilizes the strengths of an array of partners. The Bureau of Reclamation, the U.S. Forest Service, the Oregon Department of Fish and Wildlife, the U.S. Fish and Wildlife Service, the Oregon Watershed Enhancement Board and others govern the work. Some, like the U.S. Army Corp of Engineers, have provided technical expertise, offering advice from hydrological mapping experts. The restoration would not have been possible without the collaboration between river dammers and river users.

3) Value is relative, but a treaty is not

We recently visited the restoration site, and one expert questioned whether $6 million to restore two miles of river was really worth the cost.

A few weeks later, Brian Cochran, a restoration ecologist employed by the Tribes said, “not a day has gone by since that tour that I have not pondered the economic question of the project.” The treaty of 1855 promised the tribes “fish forever,” he said. “Fish populations have been depleted from a number of human activities. If we do not restore important natural streams like the Oxbow we cannot expect fish recovery.” To him, the value of a “functional ecosystem with a culturally iconic species will ultimately be greater over time than the cost of a restoration project such as the Oxbow.” But in the short term, he struggles to respond to critics. “We are often asked: ‘How many fish did your project produce?’ The answer to that question is as nebulous as the answer to the economic question.”

Although the restoration of the John Day River has seen success, the site represents just two miles of the river, a drop in the ocean of a much larger issue. Several Tribal Nations in the U.S. and Canada are now renegotiating the Columbia River Treaty, originally signed in 1964, that governs the operation of dams and reservoirs along the river.

As this campaign moves forward, governments, hydropower companies and other should remember that restoration is a vehicle towards a goal, not an end in itself. Restoring landscapes with the help of trees involves addressing issues as diverse as cultural rights and climate change. While the economic case cannot be ignored and finance often dictates what is possible, the cultural case, seen so clearly in Central Oregon, is often not afforded adequate attention. To achieve the vision of sustainable development with three dimensions (economic, environmental and social) it is important to recognize that perhaps there is something to the recent calls to recognize culture as a fourth dimension. When a landscape becomes degraded, we need to think beyond the biophysical. 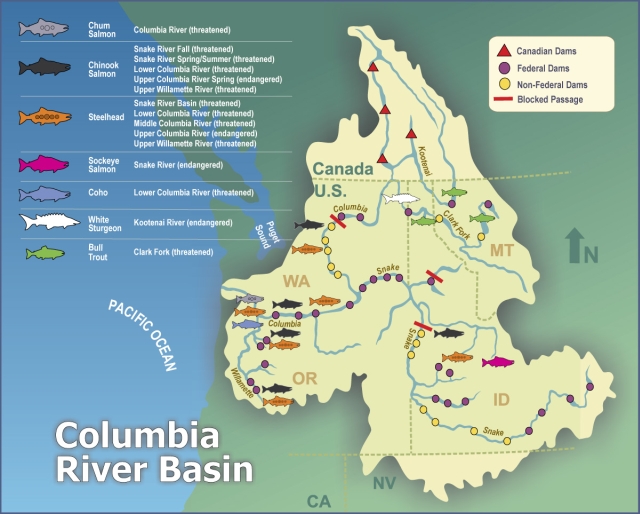 Forest Landscape Restoration Is More than Planting Trees: 3 Case Studies from the Western US

Climate Change Poses an Existential Risk to Ocean Industries. Here’s How They Can Respond.