Many prominent U.S. corporations, opinion leaders and NGOs have announced their support of the Climate Leadership Council’s “carbon dividends” proposal. The proposal includes a tax on carbon dioxide emissions, the return of tax revenues to all Americans in the form of monthly dividend payments, and the rollback of some climate regulations, among other elements.

A strong, gradually rising and comprehensive carbon price like that proposed by CLC could be foundational for a U.S. strategy to rapidly transition to a low carbon economy. Evidence suggests that implementing the Climate Leadership Council (CLC) proposal could reduce emissions far deeper than the current U.S. emissions trajectory, with or without regulatory rollbacks from the Trump Administration. A carbon price can help the United States chart a path toward a strong and resilient economy.

Possible Effects of a $40 Per Ton Carbon Tax

Independent studies suggest that a carbon price can be an effective policy for achieving climate goals. For example, a recent RFF study found that a carbon price starting around $20 per ton could achieve emissions reductions of 26 to 28 percent below 2005 levels by 2025, in line with the commitment the United States made under the Paris Agreement. CLC proposes a carbon tax at twice that level, starting at $40 per ton and gradually increasing over time.

Complementary Policies – What Regulations Would Still Be Necessary?

A core pillar of the CLC proposal is “the rollback of regulations that are no longer necessary” after an effective carbon tax is established. As this proposal moves forward, there will be a lively debate about which regulations should be rolled back and which should stay. WRI research gives some guidance about the potential for complementary policies alongside a carbon tax to increase both the cost-effectiveness and the emissions reductions from a suite of climate policies. For example, if a tax only covers carbon dioxide emissions, the policies that cover other greenhouse gases, such as methane, nitrous oxide, and fluorinated gas emissions, will still be needed. In addition, a price signal alone is not likely to spur sufficient levels of innovation and energy efficiency from the private sector, so policies, standards and investments that promote innovation and efficiency are important complements to a carbon price.

An overall policy package that included a strong carbon price and retains these types of necessary regulations while removing only truly unnecessary regulations would provide a comprehensive approach that helps move the United States towards a robust economy with significant emission reductions.

The emissions outcomes from a carbon tax cannot be predicted with precision, since they depend on the interplay of how producers and consumers respond to the tax, other factors affecting energy prices and economic growth, and future technological innovation. Because achieving climate policy goals is central to the mission of WRI, we will be working to help devise a mechanism as part of enacting a carbon tax policy that can insure it is easily adjusted to achieve required emissions reductions. Recent work around “environmental integrity mechanisms” highlights the potential to develop tools that could increase the ability of a carbon tax to achieve set emissions targets in the future. We believe that additional research and discussion around how this type of approach could be paired with the type of carbon dividend proposed by CLC could bear fruit.

A Pathway to Deep Decarbonization

Avoiding the worst risks of climate change will require eliminating a large majority of U.S. emissions over the coming decades – perhaps 80 percent or more. Despite the recent rapid pace of innovation and deployment of clean energy technologies, a recent analysis by the Rhodium Group finds that the United States will achieve no more than incremental emissions reductions based on current regulations and market forces alone. Increased action and ambition by states, cities and companies can help reduce emissions somewhat further, but we need comprehensive action across the entire country and economy to achieve emissions reductions at the scale required to address climate change. 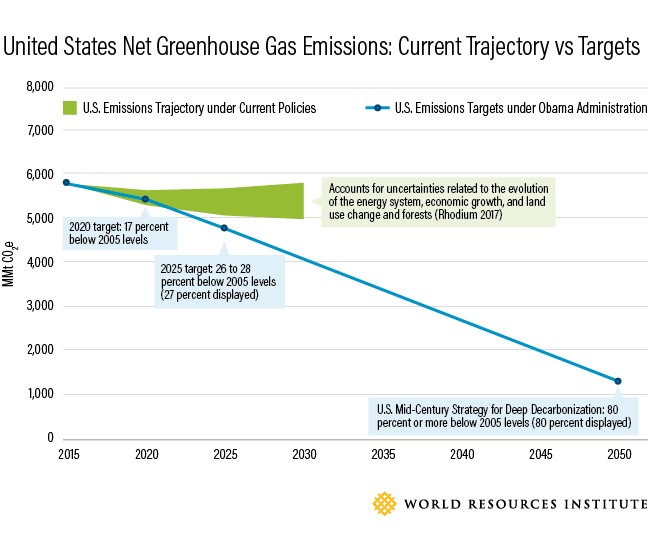 The United States needs to adjust to a changing economic landscape, new technological developments, and the reality of climate change as it works to steer a course to a strong and prosperous future. Work by the New Climate Economy has shown how taking a low-carbon path can help navigate those changes and point toward a stronger, more economically resilient, and more equitable economy. A recent study by OECD has highlighted how countries can pursue a low-carbon future while creating the conditions for strong and inclusive economic growth – realizing even stronger growth than would be expected under business-as-usual. A strong, gradually rising carbon price can be a core element of such a strategy for the United States.

CLC has put forth a serious proposal that would easily satisfy CLC’s stated objective “to exceed the emissions reductions of current regulations.” Alongside well-designed complementary policies, an increasing carbon tax starting at $40 per ton could be the centerpiece of the U.S. strategy to achieve its 2025 emissions target and then rapidly transition to a low carbon energy system.

While details still need to be worked through, the CLC proposal is a great starting point for a policy that could deeply reduce carbon emissions. As a strategic partner of CLC, WRI looks forward to working with the council, its members and other stakeholders interested in achieving meaningful and cost-effective reductions in greenhouse gas emissions.