New WRI analysis finds that Tennessee can reduce its CO2 emissions 22 percent below 2011 levels by 2020 just by taking advantage of existing infrastructure opportunities. Tennessee could reduce CO2 emissions even further, to 41 percent below 2011 levels by 2020, by increasing its use of clean energy like renewables and improving energy efficiency through state-wide standards, incentives, or other measures. Achieving these reductions will allow Tennessee to meet potentially ambitious new standards for power plants, which EPA will propose next month and finalize next year.

Tennessee’s Power Sector Is Getting Cleaner

Just in the last decade, natural gas and renewables have been rapidly replacing coal-fired power in Tennessee. Since 2005, coal-fired generation in the state has decreased 40 percent as total electricity generation decreased by 20 percent. Meanwhile, natural gas generation today is almost 18 times what it was in 2005. The majority of Tennessee’s renewable fleet consists of hydropower plants built before 1980, but since 2000 both wind and solar have made significant gains. Renewables now make up 14 percent of the state’s electricity generation. Looking forward, Tennessee plans to continue decreasing its reliance on coal. As of 2013, the Tennessee Valley Authority (TVA), the state’s primary electricity provider, is planning to retire two coal plants in the state by 2017, which would shut down 1,910 megawatts (MW), or 23 percent, of the state’s coal capacity. TVA is also evaluating the future of an additional, 741 MW coal plant in the state. The trend in Tennessee is towards less coal-fired power and more natural gas and renewables.

In early June, EPA is scheduled to announce proposed standards for CO2 emissions from the power sector. EPA Administrator Gina McCarthy has said that states will have considerable flexibility in how they comply. This flexibility could include allowing states to pursue a range of CO2 reduction opportunities, like greater use of existing lower-carbon power plants, renewables, and energy efficiency, among other strategies. Our analysis found that Tennessee could use the following tools to reduce its power sector CO2 emissions:

More measures in Tennessee to promote energy efficiency and renewables would deliver further emissions reductions, and provide savings to customers. TVA has been promoting energy efficiency since 2007 with programs across the residential, commercial, and industrial sectors. In 2012, TVA achieved 560 gigawatt hours (GWh) of energy savings across TVA’s service area in Tennessee and its neighboring states, representing about 0.34 percent of TVA’s total sales in 2012. TVA’s investment in energy efficiency and demand response has resulted in being able to avoid spending $540 million on new power plants and other resources. Several studies suggest that Tennessee can achieve much greater annual energy savings, which would both reduce emissions and save customers billions of dollars.

A recent study found that TVA could achieve 4.5 to 8.6 percent energy savings by 2020 (as a percent of the baseline), and 9.6 to 17.9 percent energy savings by 2030. The same study found that the cost-effective efficiency potential may be even higher (11.8 percent by 2020 and 22.3 percent by 2030). A separate study from Georgia Tech and the Nicholas Institute found that a 6.6 percent reduction in energy consumption by 2020 would lead to $1.6 billion in electricity savings in that year, with the average household saving $264 on their annual energy bill.

Investments in renewables could also bring economic benefits to the state. While Tennessee does not have an enforceable renewable portfolio standard, TVA provides several renewable energy programs to its customers, including its Green Power Providers, Renewable Standard Offer, and Solar Solutions Initiative programs which offer power purchase agreements at attractive terms and prices. However, these programs are budget-constrained and capped by TVA, which limits the ability of Tennessee residents and developers to maximize the state’s solar potential and corresponding CO2 benefits. By increasing its use of in-state renewable resources, Tennessee could bring additional economic benefits to the state. The state is currently home to 10 wind manufacturing facilities, and a recent study found that neighboring North Carolina’s renewable target will not have an appreciable impact on electricity rates for customers through 2026, after which clean energy use would lead to $173 million in cost savings. Together, energy efficiency measures and renewable investments can reduce energy costs and cut carbon emissions.

Tennessee Can Build Off Progress Made to Date

Tennessee has already taken some steps to scale up renewable energy and energy efficiency and the state has the opportunity to build on its progress and achieve deeper, cost-effective emissions reductions going forward. By taking advantage of available infrastructure and underutilized resources, Tennessee is in a good position to comply with ambitious EPA standards for existing power plants in the near-term. And by adopting stronger measures that support renewable energy and energy efficiency development, the state can put itself in good position to meet even ambitious power plant standards in the long-term. Measures to reduce emissions from the power sector in Tennessee can lead to increased investment, energy savings for customers, and other economic benefits throughout the state while also helping to prevent the worsening impacts of climate change. 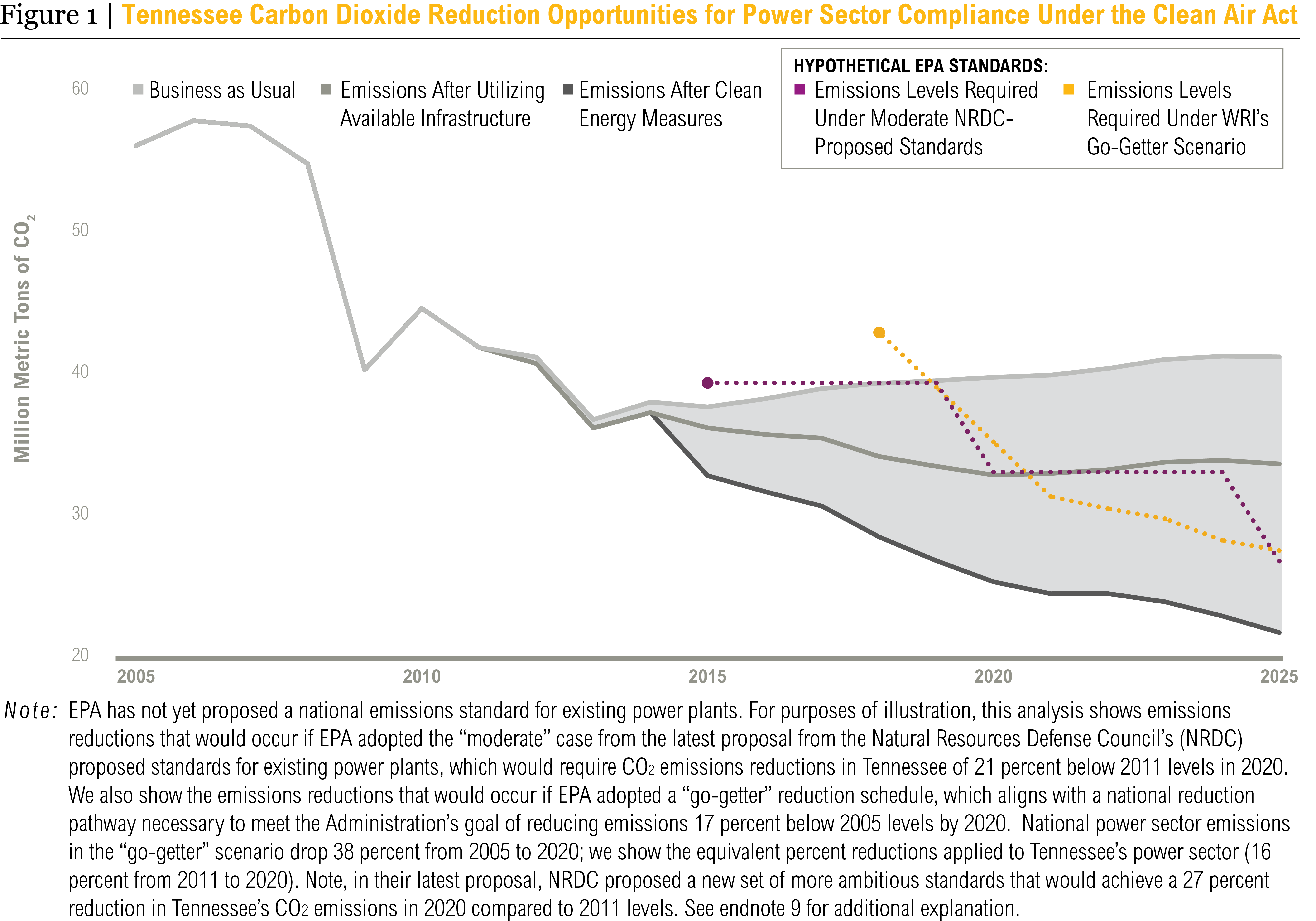