To meet the Paris Agreement’s goal of limiting temperature rise to 1.5 degrees C (2.7 degrees F), greenhouse gas emissions must reach net-zero by mid-century. Achieving this will not only require reducing existing emissions, but also removing carbon dioxide already in the air.

How much carbon to remove from the atmosphere will depend on emissions in the coming years, but estimates point to around 10-20 billion tons of CO2 per year through 2100, globally. This is a tremendous amount, considering that the United States emitted 5.4 billion tons of CO2 in 2018.

As the need for climate action becomes more urgent, the ocean is gaining attention as a potential part of the solution. Approaches like investing in offshore energy production, conserving coastal ecosystems and increasing consumption of sustainable ocean-based protein offer opportunities to reduce emissions. In addition to these opportunities, a range of ocean-based carbon removal approaches could help capture and store billion of tons of carbon.

Importantly, these approaches would not increase ocean acidification. The ocean currently absorbs just under one-third of anthropogenic CO2 emissions, which is contributing to a rise in ocean acidification and making it more difficult for organisms like oysters and corals to build shells.

A few options for increasing the ocean’s capacity to store carbon may also provide co-benefits, such as increasing biodiversity and reducing acidification. However, many approaches remain contentious due to uncertainties around potential ecological impacts, governance and other risks.

If research efforts increase to improve understanding in these areas, a combination of approaches could help address the global climate crisis.

Ocean-based Ways to Remove CO2 from the Atmosphere 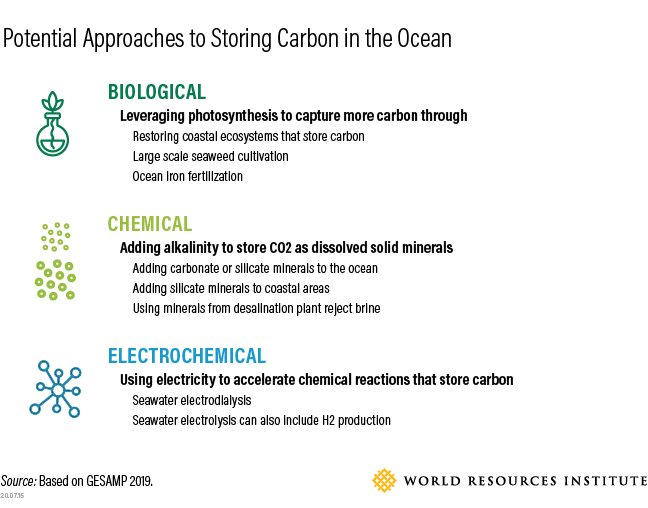 Note: This graphic represents the general types of proposed approaches, but may not reflect every proposal.

Biological approaches, which leverage the power of photosynthesis to capture CO2, offer a few approaches for carbon removal.

Restoring coastal blue carbon ecosystems, including salt marshes, mangroves and seagrasses, can increase the amount of carbon stored in coastal sediments. Globally, the carbon removal potential of coastal blue carbon ecosystem restoration is around a few hundred million tons of CO2 per year by 2050, which is relatively small compared to the need. However, ample co-benefits — like reducing coastal erosion and flooding, improving water quality and supporting livelihoods and tourism — make it worth pursuing. 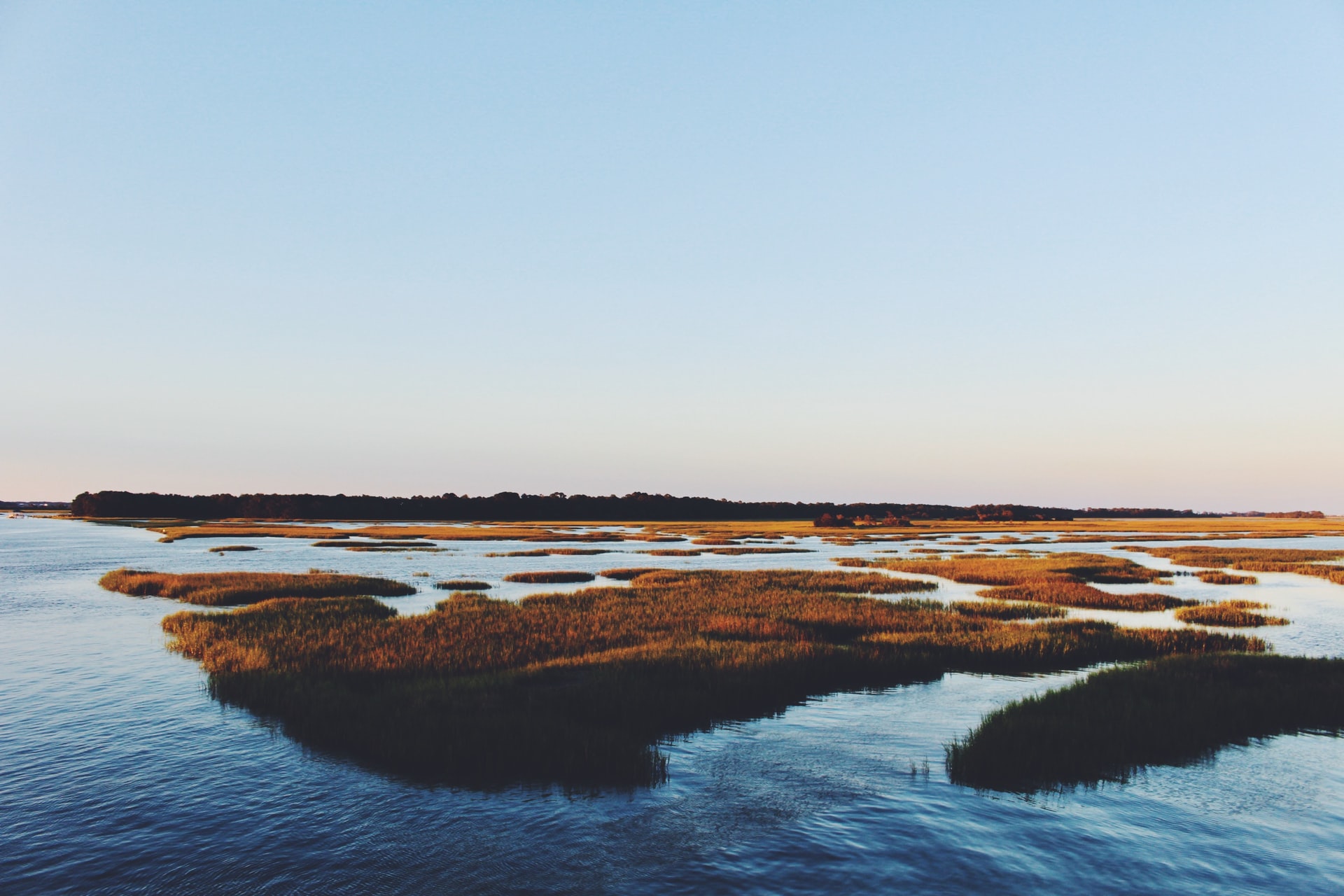 Restoring coastal blue carbon ecosystems, including salt marshes such as this one, can help store carbon in addition to other restoration benefits. Photo by Bre Smith/Unsplash

Another proposed approach is large-scale seaweed cultivation, as seaweed captures carbon through photosynthesis. While there is evidence that wild seaweed already contributes to carbon removal, there is potential to cultivate and harvest seaweed for use in a range of products, including food (human and animal), fuel and fertilizer.

The full extent of carbon removal potential from these applications is uncertain, since many of these products would return carbon within the seaweed to the environment during consumption. Yet, these applications could lower emission intensity compared to conventional production processes. Seaweed cultivation can also provide an economic return that could support near-term industry growth. 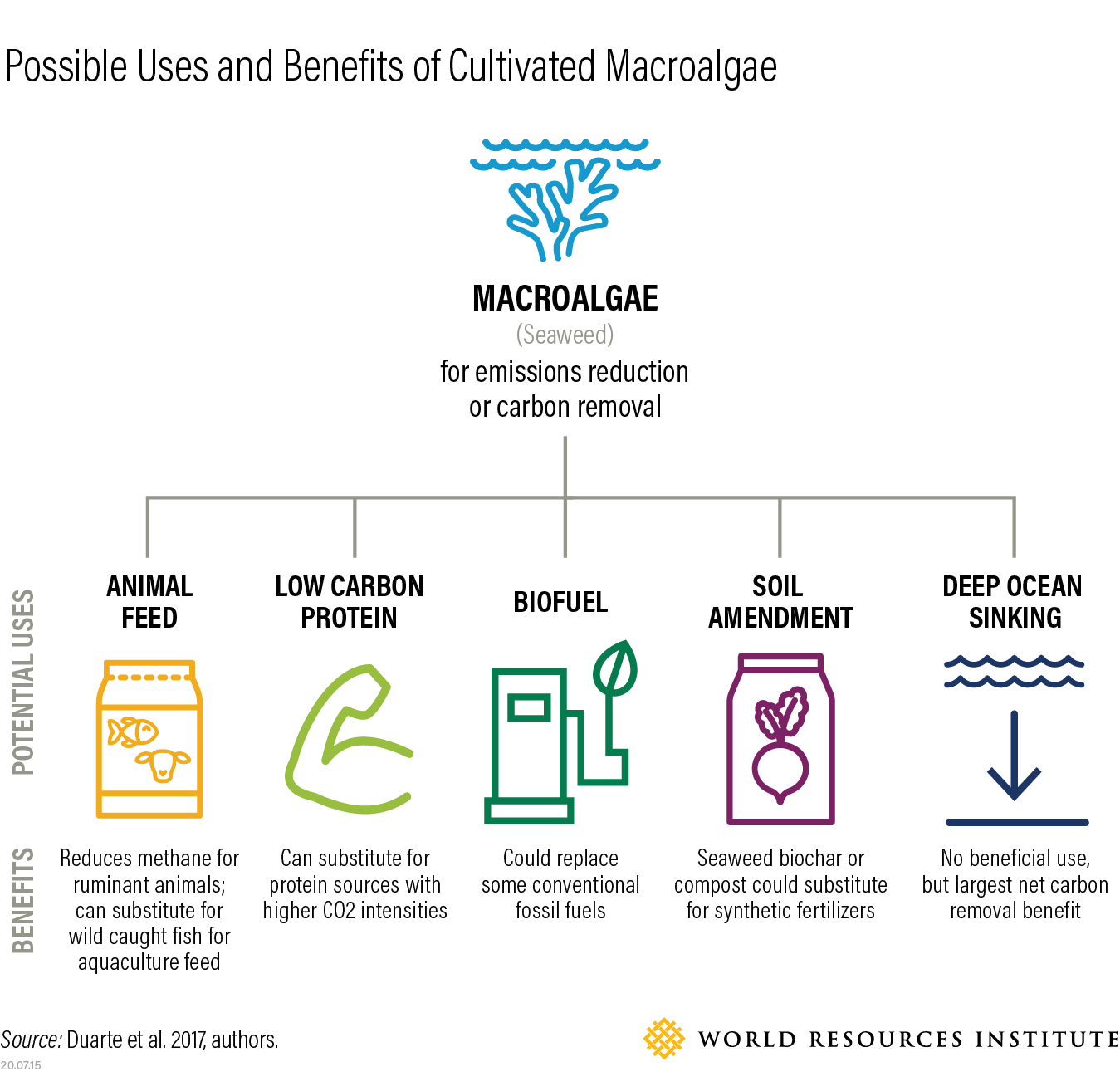 One interesting application is adding certain seaweeds to feed for ruminant farm animals, which could significantly reduce their methane emissions. Methane has especially high climate warming potential, and methane emissions from ruminants contribute roughly 120 MtCO2e per year in the United States.

Emerging research shows that certain types of red seaweeds can reduce ruminant emissions by more than 50%, though more research is necessary to show consistent long-term reductions and understand whether large-scale cultivation efforts are successful.

In addition to reducing emissions, seaweed cultivation may also reduce ocean acidification. In some places, this application is already in use for shellfish aquaculture to reduce acidification and improve shellfish growth.

Understanding potential ecosystem risks is critical to implementing this approach at scale. Potential risks include changes to water movement patterns; changes to light, nutrient and oxygen availability; altered pH levels; impacts from manmade structures for growing; and impacts of monoculture cultivation, which can all impact existing marine flora and fauna.

Continued small-scale pilot testing is necessary to understand these ecosystem impacts and bring down costs for cultivation, harvesting and transport.

A more controversial and divisive idea is iron fertilization, which involves adding trace amounts of iron to certain parts of the ocean, spurring phytoplankton growth. The phytoplankton would take in atmospheric CO2 as they grow, with a portion expected to eventually sink to the ocean floor, resulting in permanent storage of that carbon in ocean sediments. About a dozen experiments indicate varying levels of carbon sequestration efficacy, but the approach remains compelling to some due to its low cost.

Though iron fertilization could theoretically store large amounts of carbon for a comparatively low cost, it could also cause significant negative ecological impacts, like toxic algal blooms that can reduce oxygen levels, block sunlight and harm sea life. Additionally, researchers are hesitant to pursue this method due to a fraught history, including one experiment that potentially violated international law.

Because of the relatively low cost, there is also the risk of a single actor conducting large-scale fertilization and potentially causing large-scale ecological damage.

Given that this method remains contentious, a critical first step is creating a clear international governance structure to continue research. Iron fertilization continues to face scientific uncertainties about its efficacy and ecosystem impacts that, if pursued, would require at-sea testing to resolve.

Although mineral sources are abundant, accessing them would require significant energy to extract, grind down and transport. While alkalinity enhancement is in use at small scales to improve water quality for calcifying creatures like oysters and other shellfish, large scale applications would require pilot testing to understand ecosystem impacts. Additional research will also help map accessible and suitable sources of alkalinity and determine how to most effectively apply it.

Variations of electrochemical approaches could also produce valuable hydrogen or concentrated CO2 for industrial use or storage. Scaling up this approach would depend on the availability of low-carbon energy sources in suitable locations. Additional research will help map such sources and analyze potential benefits, such as hydrogen production.

Ensuring appropriate governance frameworks — both national and international — for ocean-based carbon removal approaches will be a critical pre-condition before many are ready to scale. International legal frameworks for the ocean, such as the U.N. Convention on the Law of the Sea and the London Convention and Protocol, predate the concept of ocean carbon dioxide removal. As a result, these frameworks are retroactively applied to these approaches, leading to differing interpretations and a lack of clarity in some cases.

Lastly, ocean carbon removal approaches should not move forward without first considering the impacts on local communities and indigenous populations. Community acceptance of potential pilot testing and impacts on coastal communities must also be a pre-condition to moving forward at scale.

Climate Action Must Include the Ocean

As the world seeks effective tools for the climate action toolbox, employing approaches on land and at sea would prevent over-reliance on any one approach and spread the carbon removal burden over larger systems.

However, before any large-scale application, ocean-based carbon removal approaches require continued research to better understand their effectiveness, cost, capacity and ancillary impacts. Such research will ensure a strong scientific foundation from which to pursue these concepts, while minimizing unintended impacts on ocean ecosystems.

If understood and effectively developed and implemented, ocean-based carbon removal approaches could prove valuable to reaching net-zero and avoiding the worst effects of climate change.