The Amazon contains world-class deposits of gold, copper, tin, nickel, iron ore and other industrial minerals. For decades, Amazonian governments have promoted and supported mining. But in recent years, they have committed to mining as a key component of their national development strategies and have provided new incentives to encourage investments.

Not surprisingly, mining has expanded and grown as a percentage of gross domestic product (GDP) in several countries, especially Suriname, Guyana, Peru and Bolivia. As the price of gold and other minerals soars, so do the impacts on the Amazon forest and its people, including the 1.5 million Indigenous People who are dependent on the forest for their livelihoods and well-being. 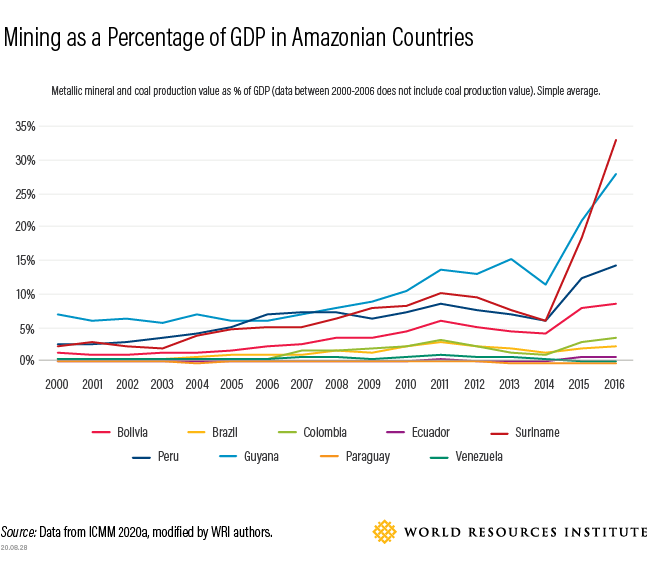 Now, the coronavirus pandemic threatens to lead to a further expansion of mining in the Amazon. Governments have declared states of emergency and issued stay-at-home orders, resulting in many sectors of the economy essentially shutting down.

In Peru and other Amazonian countries, however, governments have allowed large-scale mining to continue while constraining artisanal and small-scale mining (ASM). Large-scale mining is the principal contributor to Peru’s Fiscal Stabilization Fund.

The pandemic has especially been a boon for gold prices.

The price of gold hit a record high of $2,070.80 per ounce in August 2020. Gold prices had been rising for years, but the threat to economies from the novel coronavirus led to a surge in prices — up as much as 35% this year — as investors sought the perceived safety of gold. Additionally, COVID-19-related government stimulus packages have driven down borrowing rates and further supported gold prices. 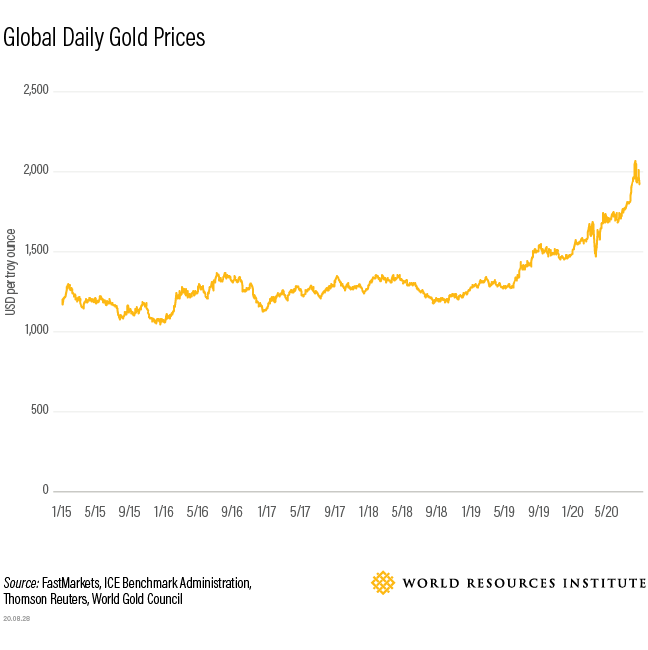 As the price of gold rises, so does demand and mining in the Amazon. In particular, illegal gold mining has grown exponentially in recent times. In 2016, it was estimated that about 28% of the gold mined in Peru, 30% of gold mined in Bolivia, 77% in Ecuador, 80% in Colombia, and 80% to 90% in Venezuela was produced illegally. These figures are now surely rising.

The rising gold prices coupled with the ongoing enforcement efforts against illicit drug production has encouraged some organized criminal groups to engage in mining. Gold is not only profitable but an easy way to launder drug money.

Illegal gold mining in the Amazon is commonly undertaken by those living in poverty, many from Andean regions. These miners are vulnerable to labor exploitation and human trafficking by mafias and cartels. In Peru and Colombia, the strategy is so successful that the value of illegal gold exports now exceeds the value of cocaine exports. 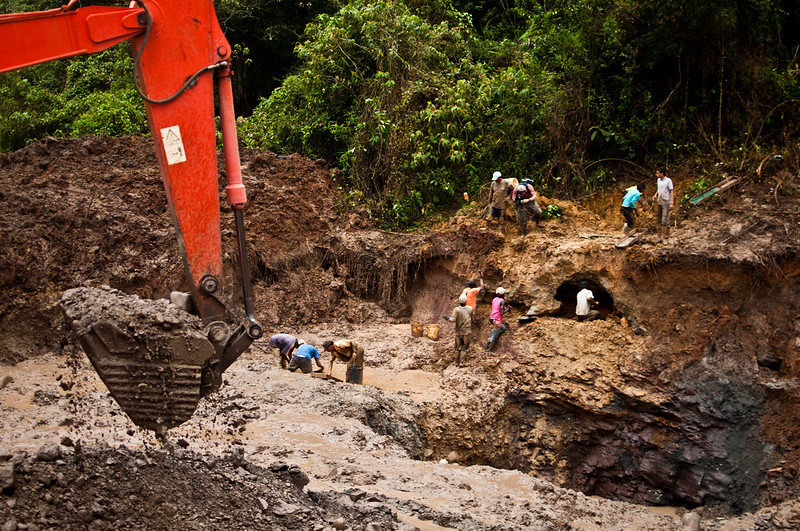 Effects of Increased Mining in the Amazon

Mining profoundly impacts local populations across the Amazon. Mining can be dangerous work and brings significant health risks. The influx of workers can lead to the displacement of local people, a rise in prostitution and crime, and the decline of culture and traditional livelihoods. Child labor exploitation, intimidation, money laundering, illegal drug trade and smuggling are also often linked to mining.

Further, miners can bring with them new diseases. The novel coronavirus, for example, likely entered the Yanomami indigenous territory in northern Brazil through illegal miners. The most marginalized members of society — indigenous people, women, children and elders and other disadvantaged people — are often the first affected and suffer the most.

Indigenous Peoples hold perhaps 2.5 million square kilometers of land, with almost half of this is in Brazil. While much of this land is formally recognized and documented, more than 20% of the indigenous lands are still held only under customary tenure arrangements and not legally secure. Today, many indigenous lands are affected by illegal mining by outsiders even in some of the more remote parts of the Amazon.

Mining on or near indigenous lands can also lead to conflict, especially with indigenous peoples who depend on the land for their livelihood. In 2019, a record 212 land and environmental defenders were killed around the world, an average of more than four people per week.

Seven of the 10 worst-affected nations were in Latin America, where more than two-thirds of the total killings took place. Colombia was the deadliest country with 64 killings — up from 24 in 2018 — accounting for 30% of the global total. Brazil had 24 killings, almost 90% of which took place in the Amazon. Globally, 40% of defenders killed were Indigenous People, despite representing just 5% of the world’s population. As in 2018, mining was again the deadliest sector, with 50 people killed.

Large-scale surface mining cuts back forest and other vegetation, which is particularly damaging to fragile environments. The degradation negatively affects the provisioning of critical ecosystem services, such as local climate and water flow regulation, carbon sequestration, and results in the loss of biodiversity.

Major disasters such as the Mariana (or Bento Rodrigues) tailings dam collapse in November 2015 and the Brumadinho dam collapse in January 2019, both in southeastern Brazil, resulted in toxic mine and ore processing waste contaminating the area.

How Governments Can Protect Indigenous Peoples from Gold Mining

As mining and its footprint expands in the Amazon, it’s time to act. Amazonian governments must ensure that: