Brazil faces a fundamental choice of how to address the convergence of multiple crises it is now seeing: health, economic and environmental. The COVID-19 pandemic exposed and multiplied the risks and weaknesses in our societies and economies, disproportionately impacting poor and marginalized communities, as well as compounding existing environmental problems.

Governments now face critical decisions, with long-term impacts, of how they approach a recovery. Rebuilding the same systems along the same flawed lines is the wrong choice — we must build back better.

Already, several G20 countries are moving in the right direction, including Germany and the EU at large, and we are also seeing positive signs in South Korea and China. Could Brazil, a G20 middle-income country, with the challenges of financial constraints, stark inequality and high dependence on commodity exports, do the same?

A new study by WRI Brasil and New Climate Economy — A New Economy for a New Era: Elements for Building a More Efficient and Resilient Economy in Brazil — answers resoundingly yes. Furthermore, the study shows that by opting for a low-carbon recovery, Brazil can address critical constraints to its long-term growth and social development — such as adequate social and economic infrastructure and logistics, productivity and competitiveness, and the innovation drive needed for long-term development of its industries.

A New Climate Economy For Brazil

Brazil's GDP is likely to shrink more than 6% in 2020. Organizations, including the World Bank and IMF, forecast an even worse scenario. Unemployment is at an all-time high, while investments at all-time lows, and poverty has been rising over the past five years. While these issues seem daunting, Brazil has a path forward that can accelerate its recovery out of the COVID-19 crisis and soften, if not reverse, these trends.

A new climate economy, one that is low-carbon and sustainable, will add $535 billion to Brazil’s GDP by 2030 compared with business as usual, and create 2 million additional new jobs. This new economy can be achieved by prioritizing low-carbon, integrated infrastructure; promoting industrial innovation through green investments; and implementing deforestation-free, high productivity agriculture. This could be a game changer and source of prosperity for all Brazilians.

The key to Brazil's recovery will be its ability to attract private and foreign investment into the economy. Sustainable investments can be a way to attract the vast flows of finance that are shifting away from fossil fuels, leverage new green capital instruments and help guarantee continued access to markets for exports. 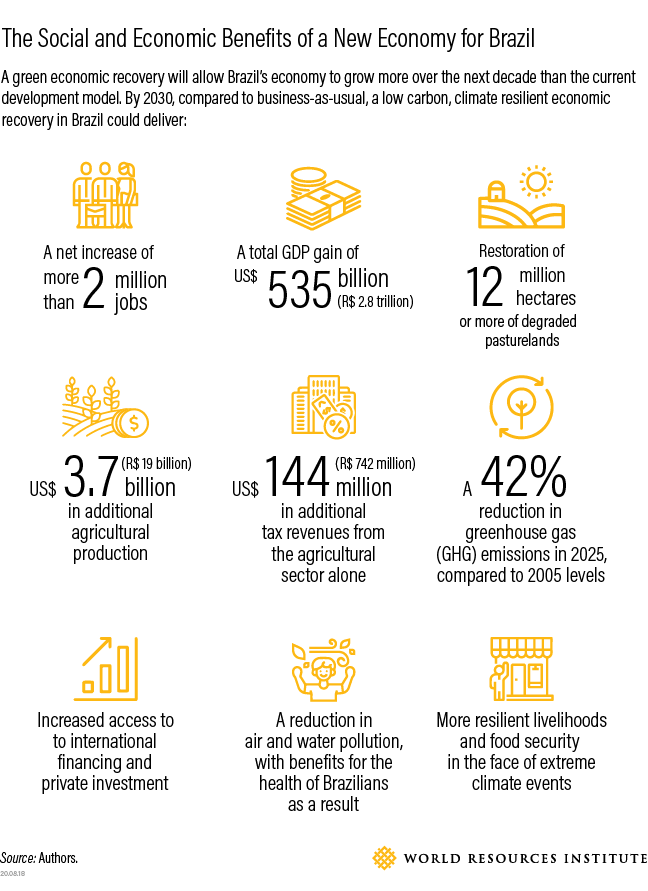 Sustainability is Smart Economics For Brazil

Preserving some of the planet's richest biodiversity is not just safeguarding a vital asset to future generations. It is smart economics for Brazil now for at least three reasons:

First, Brazil's most dynamic economic sectors are highly dependent on using the country’s natural capital wisely. For instance, the Amazon rainforest produces the "flying rivers" (the movement of large quantities of water vapor) needed to irrigate the most productive farmlands of the Cerrado, one of the largest agricultural producing and exporting regions in the world.  If deforestation continues at the current pace, the Amazon could reach a tipping point that would create a process of "savanization" — the conversion of forest to much less bio-diverse savanna. If that happens, agricultural production and exports will be inevitably and irreversibly impacted, some predictions have shown that further native vegetation loss could lead to steep reductions in soy yields. In certain areas, this drop could be up to 60%.

Second, the study gives examples of the long-term economic consequences if Brazil does not adopt a low-carbon growth — such as the health costs associated with air and water pollution. In São Paulo alone, the cost of pollution related respiratory hospitalizations from 2008-2017 reached $111 million. The World Health Organization estimates yearly deaths from air pollution in Brazil as high as 49,000, almost equivalent to those from violence.

Finally, moving to a low-carbon path avoids risks of trade and investment disruption. In 2019, Brazil lost 1.4 million hectares of primary forest cover, according to Global Forest Watch. This loss led to an international backlash, with 230 investors with $16.2 trillion under management calling on companies to publicly disclose and implement no-deforestation policies, set up monitoring and verification systems and report annually on deforestation risk. As Brazil's policies to protect the Amazon are criticized around the world, trade relations are being tested and investments driven away from the country. The EU-Mercosur trade deal was blocked last year in large part due to deforestation concerns, and some major investors are planning to diversify within the year if results are not seen.

However, Brazil does not have to choose between agricultural production and deforestation. Deforestation-free agriculture is not only possible, but can generate economic and financial benefits for Brazilian producers and exporters.

For example, the restoration of degraded pasturelands can generate an added value of $3.7 billion and generate $144 million in taxes by allowing ranchers to utilize these lands to their full potential. Sustainable and deforestation-free practices benefit ranchers and processors directly, with a study finding that benefits could range up to $34 million for ranchers, $120 million for processors and $62 million for retailers. Not only does sustainability lead to stronger revenues, but it also avoids the risk of investor shocks, as companies are unilaterally dropped from investor portfolios over deforestation.

Low-Carbon Growth Will Equip Brazil For the 21st Century

The study also reveals that opting to make sustainability a crosscutting issue by integrating it as a consideration in all sectors would create additional opportunities for Brazil to leverage scarce public resources by crowding-in (attracting private investment with an initial public investment) green finance for much-needed investments in infrastructure, industry and agriculture.

This opportunity emerges for two reasons. First, as national and international private investors are increasingly shifting away from high-risk, unsustainable projects, this change in approach would allow greater access to private finance for Brazil. Second, Brazil has sophisticated private and public financial institutions. Existing policies and regulations can be enhanced to create pipelines of sustainable projects that can back the issuances of green financial instruments to fund them.

If Brazil follows this sustainable path by focusing on resilient, natural infrastructure, innovative green industry and intensive agriculture, it will be better prepared for the challenges of the 21st century, and poised to reap the benefits that a low-carbon, high-productivity economy can generate. And the opportunities are not just for Brazil. If Brazil’s experience is successful, it could be a model for other developing nations — along with Indonesia, which is embedding sustainability into its national development plans.

A new growth approach can deliver higher productivity, more resilient economies and greater social inclusion around the world, whether in developed, middle-income or developing countries. Globally bold climate action could deliver a direct economic gain of $26 trillion by 2030, according to New Climate Economy's 2018 report. It is time for all countries to move toward a new economic, social and environmental path, one that is safer, cleaner, fairer and more prosperous.