As demand for system change after the COVID-19 outbreak grows, the recent contribution of the French Citizens' Convention on Climate Change to France's recovery plan shows how public deliberation on the kind of society citizens want can strengthen countries' efforts to build back better.

A recent Ipsos poll conducted in 14 countries found that two-thirds of citizens consider the climate crisis as serious as COVID-19, and want their governments to prioritize climate action in the economic recovery. While prompt responses are important for immediate relief, the trillions governments will spend in recovery programs need to respond to public demand and drive major shifts for cleaner, safer and more fair economies. Such far-reaching measures need input from across society, and mechanisms to ensure policymakers' transparency and accountability to what people want and need.

Citizens' assemblies, which form representative samples of a country's population, could allow public aspirations to be better heard and acted upon by governments. Various governments, including in Ireland, France, the UK and Spain, are mandating these assemblies to support thorny public decision-making, and some have already spurred policy breakthroughs on abortion rights and climate action for instance. These assemblies also offer countries a way to address other complex issues, such as the resilience of healthcare and food systems, especially as societies deal with the impacts of COVID-19.

The French Citizens' Convention on Climate is one such example. Formed in response to the Gilets Jaunes' (Yellow Vests) protests against an unfair fuel tax and rising social inequalities, the Citizens' Convention started working in October 2019 to propose measures that could cut national greenhouse gas emissions by at least 40% by 2030 "in a spirit of social justice."

Despite the ongoing lockdown, the Citizens' Convention met on Zoom in early April to select 50 priorities that tackle three goals at once: boosting economic recovery, reducing greenhouse gas emissions, and improving health and well-being with a strong focus on the most vulnerable. Some of these priorities address vulnerabilities highlighted by the COVID-19 crisis:

The whole list of measures will be made public after a formal vote on the Convention's full report during its last session in June. French President Emmanuel Macron has already confirmed in his response letter to the Citizens' Convention that these 50 measures will be fully taken into account in the government's plans to foster a sustainable recovery.

If adopted, these 50 measures would dramatically increase the ambition of France's climate legislation, while reducing the country's vulnerability to shocks such as pandemics or supply disruptions, and foster much needed job creation. What can make citizens' assemblies a good option for developing bold measures to address economic recovery, resilience and climate action all at once? The French experience highlights four reasons:

An unprecedented coalition of social, climate and open democracy movements proposed the French Citizens' Convention on Climate in an open letter to Macron. These groups joined forces as the "Gilets Citoyens," following the Gilets Jaunes' calls for a just ecological transition and the historic success of the Case of the Century (Affaire du Siècle), in which more than 2 million supporters petitioned to sue the French state in court for climate inaction.

These movements underscored that an assembly which mirrors its society's diversity and voices the needs of all social groups could identify new compromises for bolder and fairer climate solutions. It would also help address growing distrust in representative democracy.

The French government saw this proposal as an opportunity to address these concerns: its mission statement for the Convention presents citizen deliberation as a response to growing demands for social justice, public participation and faster climate action. 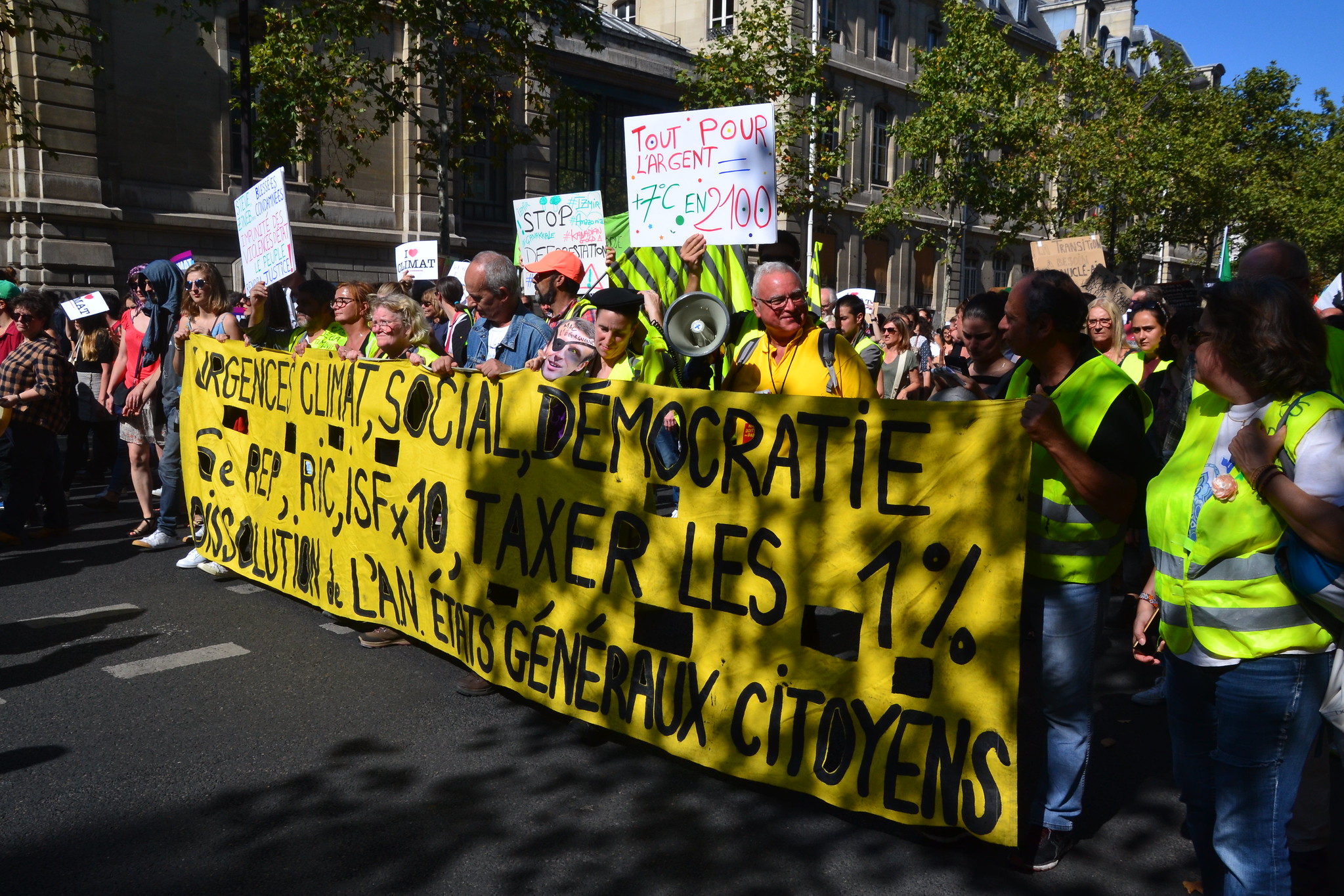 The French Citizens' Convention on Climate formed in response to popular demand. Photo by Jeanne Menjoulet/Flickr.

2. Citizens' Assemblies Can Have Teeth, with Deliberation Turning Into Adoption

The French government committed from the start to put forward the Convention's proposals for legal adoption "without any filter" — without changes — (if formal requirements are met) either through referendum, parliamentary vote or executive order. The government also agreed to present a timeline for implementing these measures. This commitment is unprecedented for a national citizens' assembly, and if fulfilled, could create a strong example for other countries if successful. It has empowered the Convention and strengthened the trust of its members that their voices will be heard.

The Gilets Citoyens obtained major guarantees from the French government regarding four conditions essential for ensuring the convention's legitimacy and effectiveness:

Representativeness: A selection process of up to two months allowed for the random selection of 150 citizens with good balance in terms of gender, age, education, jobs, residency and location to represent the wider society. While 30,000 British people were asked by letter if they would like to be considered for the UK citizens' assembly, 300,000 French citizens (10 times more despite similar population size) were called. This process helped include harder-to-reach demographics such as teenagers, single mothers and blue-collar workers. Like the wider French population, one-fourth of convention members don't have college degrees. Financial compensation, support for childcare and guarantees from employers were also essential to achieve this representation.

Transparency: All the plenary sessions were filmed, as for the UK citizens' assembly, and the convention website and social media share updates and interviews with participants to build trust in the process and engage the broader society.

Independence: Safeguards include guarantors who oversee the convention's impartiality and protection from interest groups; a group of 14 experts selected for their neutrality who advise members of the Convention; the restriction of contact between Convention members and external actors during the sessions; and rules for broader public consultation allowing only one contribution per participant and excluding online debate to lower risks of influence from organized lobbyists. In the UK, expert leads with support from advisory and academic panels have also ensured that information provided to the country's Climate Assembly was balanced, accurate and comprehensive.

4. Deliberation Processes Can Be Designed to Handle Complexity

Unlike previous citizens' assemblies in countries like Ireland that addressed one policy issue at a time, the governance committee for the French Citizens' Convention let members work in parallel working groups to deepen their understanding of all five issues on the agenda — housing, food, transport, consumption and production — throughout the deliberation process. An internal online platform for participants allows continuous information sharing and discussion. This choice reduces risks of running out of time for some topics, as the Irish citizens' assembly for electoral code reform experienced. It also allows better deliberation on complex issues. For instance, experts' inputs over several sessions led some Convention members to change their views on a carbon tax thanks to greater understanding of redistributive options that could offset adverse impacts to households and benefit lower-income earners.

In addition, these 150 citizens have access to a variety of resources: a synthesis of the scientific literature and existing French legislation; expert hearings; a synthesis of online contributions from the broader French public; advice from the expert support group and quick feedback from fact-checkers. A Public Law Committee of legal experts helps draft the measures for referendum, legislative or regulatory purposes.

As governments need to quickly put together COVID-19 recovery plans that support much more sustainable and resilient economies, they should consider the potential for citizens' assemblies to get public input effectively and efficiently. Like the French Citizens' Convention, these assemblies could propose concrete measures spurring system changes that address inequity through a trusted and transparent process, reflecting the diversity of voices in society. One of the 50 priorities put forward by the French Convention is precisely the promotion of other citizens' assemblies to accelerate local transitions.