U.S. states and utilities made more ambitious clean energy commitments in 2019 than ever before, with many committing to reaching 50% or 100% clean energy in the coming decades.

Public concern about the current and future effects of climate change drove much of this action, making goal-setting a legislative priority for many governors. Utilities are also increasingly committing to slash fossil fuel generation and transition to zero-carbon electricity production in the coming decades. For example, Duke Energy, the nation’s largest electric power producer, pledged in September to become carbon-neutral by 2050, joining more than three dozen other major utilities in setting clean energy goals.

The fact that these commitments are emerging across the country is a reminder of the different approaches that can and are being used to shift to a low-carbon energy system. Taking a closer look at these pledges also brings into focus the regional and system-wide reforms necessary for a 21st-century power system that accommodates a decarbonized economy from coast to coast.

Here are some of the biggest clean energy moments for U.S. states and utilities over the past year:

Fifteen states (and Washington, D.C. and Puerto Rico) now have official targets to get at least 50% of their electricity from clean sources. These states represent 28% of all U.S. electric power demand, up from just 17% last year.

Other states’ clean electricity targets were decreed by governors through executive actions. In states like Wisconsin and Michigan, pro-climate governors face the task of working with legislative majorities that aren’t as keen on moving these plans forward. Still, their executive orders carry weight beyond simply sending an important signal, often accompanying renewable procurement targets and, in some cases, establishing new state agencies with their own authorities. 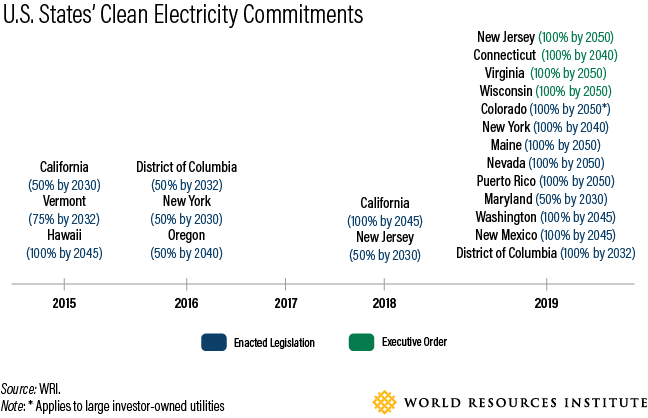 Despite Common Targets, the Path Forward Differs by Region

While many of these clean energy targets across U.S. states appear similar, the approaches to meeting them will vary considerably. Regional differences in market structures, existing energy resource mixes, access to new renewable energy resources, and regulatory environments will dictate the ways that states can carry out their low-carbon transitions.

For example, New York enacted the Climate Leadership and Community Protection Act in June, which pledges 100% carbon-free electricity by 2040 and net-zero carbon emissions economy-wide only 10 years later. The state is expected to rely on a broad portfolio of solar, wind, offshore wind, and existing nuclear and hydropower. This new law boosts New York’s renewable portfolio standard up to 70% by 2030, ensuring that significant expansion of clean energy occurs over the next decade.

Meanwhile, Colorado took swift action by enacting a raft of climate and energy bills, including a goal to reduce economy-wide greenhouse gas emissions 90% by 2050. Colorado worked with one of its major utilities, Xcel Energy, to codify its pledge to generate 100% carbon-free electricity by 2050 and use loan refinancing, or securitization, to lessen the financial impact of fossil fuel plant retirement. The state, which currently depends on fossil fuels for more than 75% of its electricity, looks to replace this generation primarily with an expanded portfolio of new wind and solar-plus-storage resources, and associated transmission buildout.

Investor-owned utilities across the map have also pledged to reduce the percentage of fossil fuels making up their power mixes, and, in some cases, completely decarbonize. In the Northwest, Avista and Idaho Power committed to 100% clean power generation; Xcel Energy did the same in Colorado and Minnesota. Elsewhere in the Midwest, Ameren in Missouri committed to slash emissions 80% by 2050. These pledges suggest that power companies are beginning to recognize that the shift to low-carbon energy is inevitable and are finding it advantageous to lead in this transition.

A number of utilities have also made progress on executing their goals. For example, Michigan-based Consumers Energy issued an integrated resource plan (IRP) that sets itself up to reduce emissions 90% by 2040, fully eliminate coal from its portfolio, and add 5 gigawatts of solar capacity over the next decade. One state south, Northern Indiana Public Service Co. (NIPSCO) is moving ahead to replace its coal portfolio by 2028, primarily with a mix of solar, wind and battery storage. Meanwhile, Florida Power & Light announced plans to build one of the world’s largest solar-powered, utility-scale batteries as part of its efforts to support 30 million solar panels, or roughly 10 gigawatts, by 2030. Just this month, Edison Electric Institute, which represents U.S. investor-owned utility companies, announced that its members are on track to reduce CO2 emissions 80% by 2050 relative to 2005. 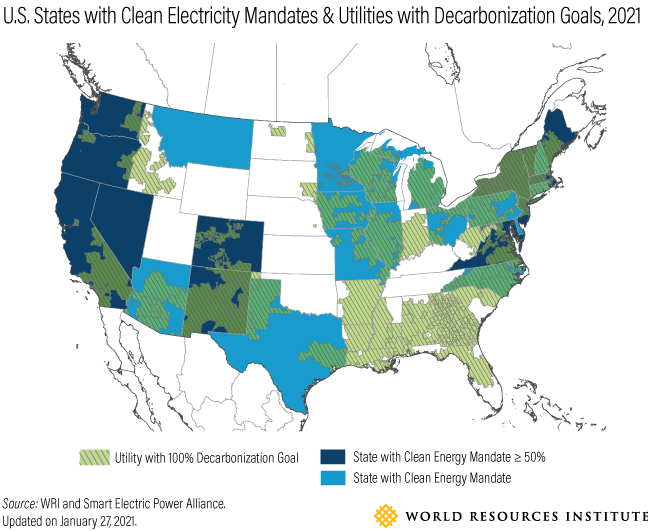 Reforms Will Be Necessary for U.S. States and Utilities to Meet Their Clean Energy Goals

Looking forward, the ability of states and utilities to realize their aggressive clean energy goals will hinge on improvements in physical infrastructure, electricity market design and technologies. The buildout of new transmission will be necessary to connect customers to least-cost renewable resources at optimal sites. Much of this transmission capacity will need to cross state boundaries and overcome possible local opposition to transmission-line siting. Wholesale electricity markets must evolve to better incorporate clean energy technologies, which differ from those of conventional fossil plants in their variability, the way that they can provide grid services, and lack of reliance on fuels. Future markets will need to ensure that pricing structures sufficiently compensate renewable resources, that grid services maintain reliability, and that the system has sufficient flexibility to address the variability of renewable resources. Battery storage will play a role in addressing the daily variability of renewable generation, but other technologies will likely be needed to address longer seasonal variations in renewable energy output. Finally, offshore wind, hydrogen production, carbon capture technologies, and other technologies may also play a role in meeting final state and utility targets by mid-century.

The past year was significant for states and utilities to establish the clean energy goals that will put them on the right track in the long run. This the first step to decarbonizing the electric sector. Now it’s time to move forward on the structural and institutional changes needed for states and utilities to fully make their low-carbon transition.