They are all delicious, but they are all made from the same main ingredient: cassava, also known as manioc or yucca. It has, for some time, been the only crop grown in this area. That makes for a less-than-nutritious diet.

Recently, that has begun to change. With help from WRI Brazil, Soares’ household, along with 21 other families in Juruti, shifted their farm away from cassava-only cultivation towards a system known as agroforestry. Agroforestry—which involves integrating trees and shrubs into farming systems—can diversify farmers’ crops by adding fruit trees and other edible plants on fields.

In areas that were once subject to slash-and-burn, agroforestry has the added benefit of restoring these areas of forest to greater productivity. Now, advocates hope what’s happening in Juruti can serve as a model for full-scale forest restoration in Brazil, which has a goal of restoring 12 million hectares (almost 30 million acres) of forests by 2030.

A community of about 50,000 on the banks of the Amazon River, Juruti has grown considerably in the last decade due to bauxite mining. Population and economic growth, however, have not yet stimulated significant rural development. It is a poor area, served only by rough dirt roads and separated from modern resources like sewers and sanitation.

Most of the rural population uses fire to clear land for agriculture, a technique they call coivara; in English, it is known as slash-and-burn. 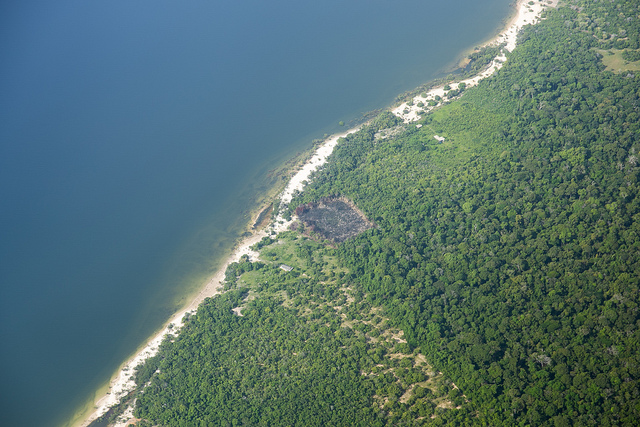 Note the square patch in this land near Juruti burned by coivara. Joana Oliveira/WRI Brasil

A cleared area will produce cassava for two or three years. After that it is abandoned, and the farmer moves on to a new area.

Previously, farmers would take two or three decades to return to a burned area, which would have recovered by then. These days, because there is a shortage of land available for farming, they return in just over two years. Successive burnings have depleted the soil in Juruti, making crops less productive. As climate change modifies the dynamics of rainfall in the region, fires often spread from crop fields into pristine forests.

It was clear that Juruti’s farmers needed the landscape to change if they wanted to continue living there. But the question remained: How could they restore the land and make it more productive for them?

Productive Forests and the Social Landscape

One possible answer lies in agroforestry. 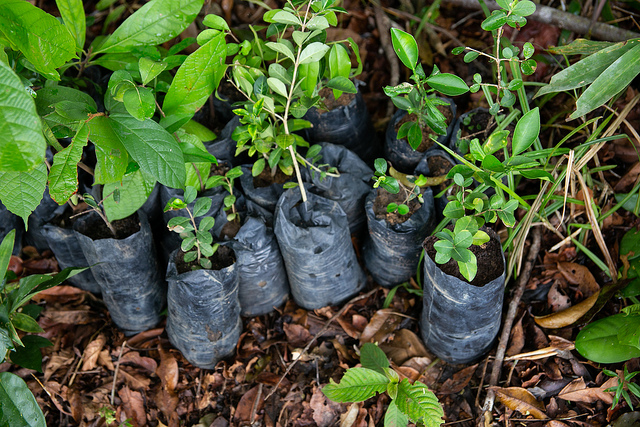 Agroforestry in Juruti would allow farmers to continue producing cassava or keeping livestock, while at the same time introducing native fruit trees and other plants that improve soil quality. (The seeds for these native plants must be gathered from the forest—more on that below.)

It’s a stark difference. Under the previous system, farmers would only last two or three years before they had to slash-and-burn their way to a new field. With agroforestry, the same area can grow cassava, fruits, nuts and wood products over a 30¬-year cycle—without burning the forest.

A good forest restoration project needs to know everything it can about the landscape that will be restored. What kind of soil is there? What species can survive, and which will thrive?

People are vital too. Communities, corporations, government agencies, and individuals all influence the outcome of a project. Understanding these actors’ needs, motivations, and relations is crucial to a successful project.

WRI approached members of the Juruti community to learn more about the social landscape focused on agroforestry. We initially convened conversations with men and women together. But women let their male partners lead these conversations. In order to represent the input of women in a more balanced manner, researchers split men and women in two different groups, creating an environment where women could share their opinions more comfortably. This approach revealed that women had access only to second-handed information sources on farming and restoration (such as information from neighbors or the church), while men tended to get information in primary sources (such as official, governmental rural assistance).

Women basically did not have the information they needed to implement the roles they held in the transition to agroforestry.

These roles are important. Many farms are led by women, especially when men work away from the farm for wages. Additionally, women are the ones who travel into the Amazon to gather the seeds necessary to plant native species. Juruti is not close to other villages, making this travel dangerous; floods posing a risk that is magnified by the fact that women often do not have access to the Internet, where they might obtain up-to-date meteorological information. Getting this information to women in a different way would be a boon to restoration efforts that hinged on native species.

As the social landscape mapping uncovered, women get their information from very different sources than men, tending towards secondary and word-of-mouth sources such as elders, children and the church. To reach women, restoration advocates need to include more than just the publications men were reading in their outreach efforts. 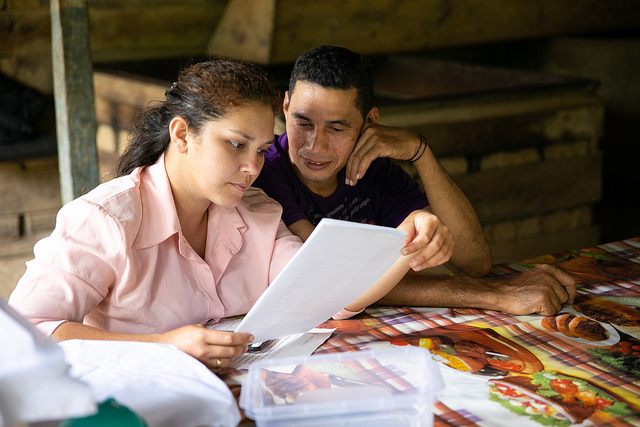 The findings of the consultative process helped the WRI Brazil Forest team set up the next stage of their project: 21 households would participate in pilot agroforestry projects. 14 of the families selected were led by women, and the team provided them with technical support through workshops and other activities. WRI Brazil hired Petra Terra, an agroforestry start-up, to build agroforestry designs according to each family’s needs.

With this support in place, at the beginning of 2019 Soares’ family planted a demonstration unit managed according to the principles of agroforestry. Where cassava was once the only crop, the demonstration hectare mixes crops and forest. They planted native trees, including paricá, cumaru (also known as tonka) and even rosewood (used in perfumes), as well as fruit trees, such as açaí, cupuaçu — a tropical rainforest tree fruit related to cacao — and banana.

"My goal is to show people how to produce without deforesting. We want to take this work to other farmers," said another project leader, Fatima de Melo Lima, smallholder farmer and the president of the Rural Workers Union in Juruti.

The Soares family, for example, wants to continue producing cassava—and making their delicious traditional pastries and cakes. But agroforestry enables them to diversity their offerings. Who knows—in the future, the family table may have açai, cupuaçu and other diverse fruits of the Amazon alongside cassava.