In its latest retreat from federal action on climate change, the Trump administration announced plans to weaken regulations on methane emissions from oil and gas production. The Environmental Protection Agency’s (EPA) proposed amendments would “rescind emissions limits for methane from the production and processing segments of the industry,” and would no longer require sources in the transmission and storage segments to monitor and fix methane leaks. The rollback is opposed by many oil and gas producers.

Methane is a potent greenhouse gas. Its warming potential is 36 times that of carbon dioxide over 100 years (87 times over 20 years), and the oil and gas industry is the largest source of it in the United States. Natural gas is composed almost entirely of methane. While natural gas is cleaner-burning than oil or coal, it is still a significant and growing source of carbon dioxide emissions, and methane leaks occurring during drilling, extraction and transportation erode its climate advantage over other fossil fuels. A recent study published in Science found that the U.S. oil and gas industry emits 13 million metric tons of methane from its operations each year. This is 60% more than currently estimated by the EPA. 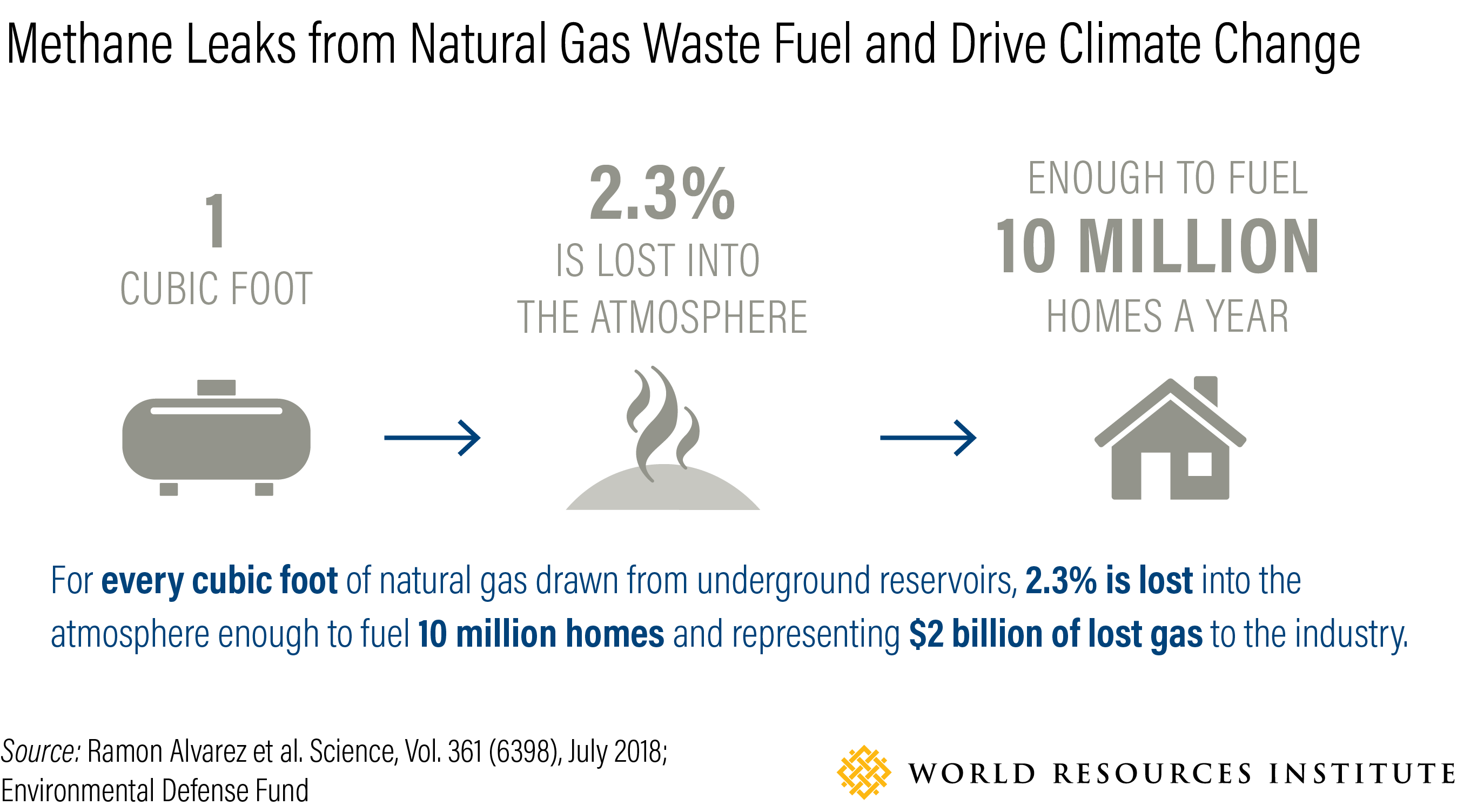 This is not just a problem for climate change, but for companies’ bottom lines, as lost methane is ultimately lost product. For every cubic foot of natural gas drawn from underground reservoirs, 2.3% is lost into the atmosphere, according to the Science study, enough to power 10 million homes and representing $2 billion of lost gas to the industry. And with natural gas production increasing in the United States, reining in methane emissions is only becoming more pressing.

Yet as the federal government retreats on curbing a growing source of U.S. emissions, states are stepping up. Four in particular show how companies can cost-effectively reduce methane:

In 2014, Colorado introduced the United States’ first direct regulations on methane emissions from both new and existing oil and gas wells. Colorado’s regulations require oil and gas companies to find and fix methane leaks, and, where necessary, install technologies to limit or prevent emissions. The regulations apply to oil and gas exploration and production operations, well production facilities, compressor stations and natural gas processing plants. The frequency of inspection is based on the amount of leakage found, ranging from as little as once a year to as often as once a month.

Some of the state’s major oil and gas producers supported the regulations, and it has been held up as a model for the federal government and other states. In 2018, the Colorado Air Pollution Control Division found that the number of methane leaks fell by 52% after the regulations were implemented, from more than 36,000 in 2015 to 17,250 in 2017.

More recently, the state passed Senate Bill (S.B.) 181, which sets the wheels in motion for the state Oil and Gas Conservation Commission (COGCC) to revisit its existing rules and consider stricter requirements with respect to leak detection and repair, pipeline inspection, emissions from “pneumatic tools” like gas-driven pumps and compressors, and continuous methane monitoring “at facilities with large emissions potential, at multi-well facilities, and at facilities in close proximity to occupied dwellings.” In addition, S.B. 181 gives regulatory power to local governments in well placement and restructures the mission of COGCC from “fostering” the growth of the oil and gas sector to “regulating” it and prioritizing the protection of public safety, health and the environment. 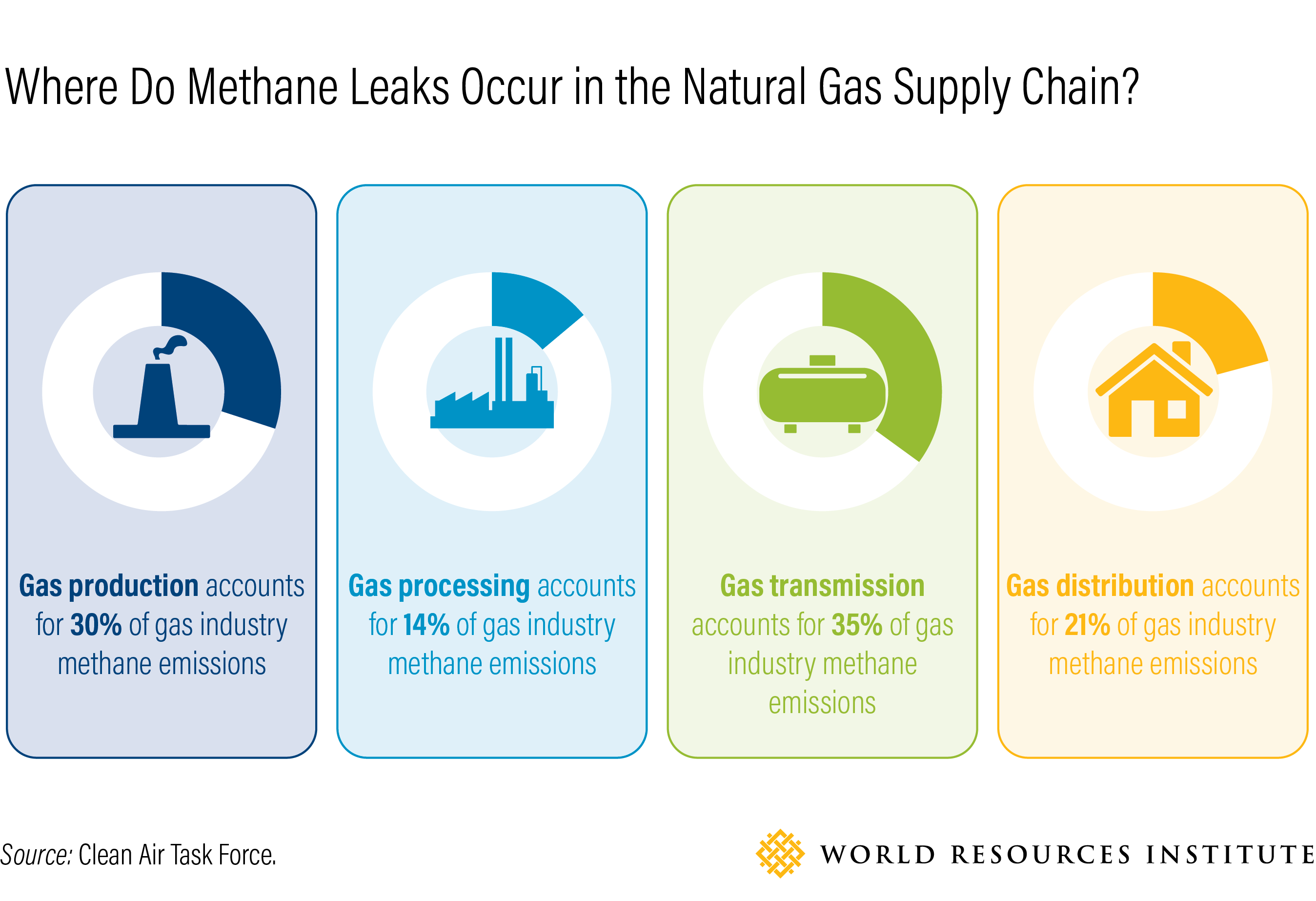 Recently, however, Pennsylvania’s efforts to regulate emissions from its thousands of existing wells have generated significant criticism. In April 2019, the Pennsylvania Department of Environmental Protection unveiled a proposed rule that does not establish specific emissions standards for methane but “places controls on [volatile organic compound] VOC emissions which in return reduces methane as a co-benefit.” According to scientists, though, most of the Marcellus Shale in Pennsylvania is comprised of dry gas, which contains a lower fraction of VOCs than the wet gas found in the southwestern part of the state. In other words, regulating VOC emissions will not be effective in reducing methane leakage from dry gas.

A few states have also turned their attention to addressing methane emissions from the natural gas transportation system, the network of pipes used to move gas from production sites to consumers’ premises. The gas transportation system consists of approximately 2.5 million miles of pipes. Damaged pipelines and malfunctioning equipment are a big source of methane leaks along the natural gas supply chain.

In Massachusetts, which has some of the oldest gas infrastructure in the country, a new state regulation requires utilities to detect and fix within two years “Grade 3 leaks of significant environmental impact.” Up until now, utilities didn’t have any obligation to fix methane leaks if they weren’t an explosion hazard. This builds upon legislation passed in 2014 that established a grading system for leaks and requires that dangerous leaks are fixed. In 2016, another act directed the state’s regulatory agencies to come up with a plan to identify and repair leaks that have a “significant environmental impact.” Since 2016, a stakeholder group of scientists, gas utilities and environmental organizations tested five different ways of detecting Grade 3 leaks of significant environmental impact and settled upon the “leak extent method” as the cheapest and most effective technique. The group submitted a five-year Shared Action Plan to the Massachusetts Department of Public Utilities (DPU), which issued the regulation in March. Now gas companies are also required to provide information to DPU on new leaks, existing leaks and leak repairs each quarter and in their annual reports.

California has adopted a novel approach that fundamentally alters the utility business model for detecting methane leaks from natural gas pipelines. Currently in most states, utilities are required by law to fix gas leaks that can cause fires and explosions, but they’re not obligated to fix leaks that just waste gas. State public utility commissions simply recoup the costs of leaked gas by passing them on to consumers. The California Public Utilities Commission (PUC) now requires its utilities to absorb the value of gas they emit into the air, incentivizing them to prevent leaks. In the process, California has become the first state to tie its utility rates to reducing methane emissions from natural gas use. California also has one of the strongest provisions to regulate methane emissions. It targets emissions from both upstream (production, gathering and boosting stations, and processing) and some downstream facilities (storage and transmission compressor stations). It also requires regulated entities to take actions to limit intentional (vented) and unintentional (leaked or fugitive) emissions.

There Is Room for Greater State Leadership in Reducing Methane Emissions

While some states are taking innovative approaches to curb methane emissions, others are not. Currently both Texas and North Dakota — two of the biggest oil- and gas-producing states — do not have adequate regulations on methane emissions. In North Dakota, the industry “flared,” or intentionally burned, large amounts of gas considered uneconomic to collect and sell, amounting to 526 million cubic feet of methane a day in October 2018, the highest since the state began keeping records in 1990. In the Permian Basin (Texas and New Mexico), oil companies flared 533 million cubic feet a day during the fourth quarter of 2018. State legislatures should consider adopting regulations to cost-effectively control flaring, venting (discharge of unburned gas into the atmosphere, carried out to maintain safe conditions) and leaks by requiring gas capture at oil wells, preventing and/or minimizing venting and flaring during gas maintenance, and ensuring prompt detection of leaks and repairs. In developing these regulations, states could look to the examples set by Colorado and California.

States should also step up with regulation of gas pipeline leaks. Absent regulatory options, utilities may be reluctant to repair leaks given that the standard practice passes the cost of leakage to consumers. Public utility commissions should consider policies like California’s to provide stronger incentives for utilities to control leaks.

Moreover, new technologies are emerging that will allow companies throughout the oil and gas supply chain to more easily identify “super-emitters,” the small number of sites that account for a large proportion of emissions. As these technologies improve over time, they will allow for lower-cost opportunities to rein in methane emissions. Regulations should incorporate these leak detection and repair technologies, as has happened in Massachusetts.