Hurricane Dorian’s devastating hit on the Bahamas left the government scrambling to mobilize resources for disaster response and recovery. Government resources alone won’t be enough for long-term recovery and rebuilding, especially to rebuild in a more climate-resilient way; international financial support will be required.  However, the Bahamas government has a few financial tools to provide relatively small but vital resources for immediate disaster response.

One of those tools is sovereign parametric insurance, which the Bahamas purchases from CCRIF SPC (formerly the Caribbean Catastrophe Risk Insurance Facility or CCRIF) for tropical cyclone and extreme rainfall risks. Parametric insurance relies on catastrophe models and pays out automatically when certain pre-agreed conditions, such as rainfall, wind speed, or modeled economic losses, meet or exceed a given threshold. This avoids time-consuming, on-the-ground assessments of losses, enabling parametric insurance to pay out much more quickly than traditional insurance policies.

Sovereign parametric insurance can play an important role in helping countries mount effective disaster response. But to do so, governments must use insurance payouts effectively.  Early reporting from the Bahamas suggests that government institutions were so badly weakened by the disaster that they have had trouble implementing response efforts. Instead, in Dorian’s immediate aftermath, an ad hoc network of volunteers led efforts to distribute emergency supplies.

This raises questions about the value of sovereign parametric insurance in practice: What happens when the local government institutions that are supposed to put the insurance payout to work are themselves hobbled by the disaster?  How can governments guard against this possibility and ensure they are making the most of their insurance policy?  One answer is to insure not only the government but also other institutions that can help reach affected people quickly.

Caribbean governments launched CCRIF in 2007 with support from the World Bank and other development partners to allow countries in the region to pool their risks. Doing so helps them access more affordable insurance coverage than would otherwise be possible. CCRIF’s products use models to estimate how much damage a particular catastrophe is likely to cause based on where and how it strikes. Its models are built by running thousands of simulated catastrophic events and combining the results with data on exposed assets and their vulnerability to disaster. This data includes information on a region’s infrastructure, building stock, topography, distribution of population, and crops.

When a disaster such as Dorian happens, CCRIF collects data on the storm, including wind speed and storm surge height, from the U.S. National Hurricane Center and plugs it into the model for the tropical cyclone product. If the losses computed by the model exceed a threshold level set out in the insurance policy, the government receives a payout. The size of the payout also depends on the terms of the policy. When signing a policy, the government chooses the amount of financial protection it wants to buy. The Bahamas received a $10.9 million payout for damage from Hurricane Dorian under its tropical cyclone policy. 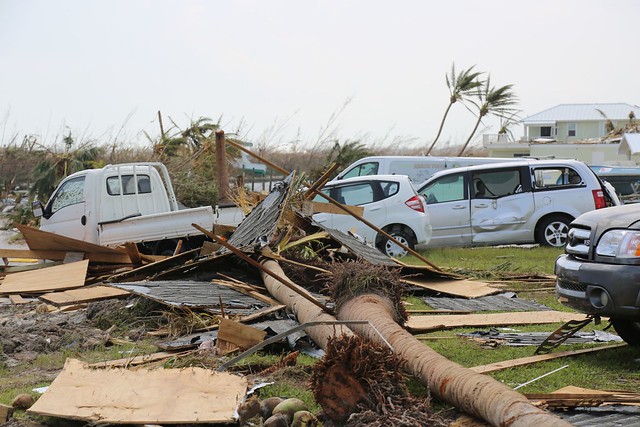 But what happens when government institutions need additional help to effectively mount a response? In a new study by WRI on regional risk pools, we describe an innovative insurance product that the African Risk Capacity (ARC), a regional pool that provides parametric insurance to African countries, has put to use to help address this challenge.

This sends emergency cash through two sets of pipelines — the government’s and the humanitarian system’s — doubling insurance coverage and increasing the likelihood that money will reach the ground quickly and effectively. Humanitarian organizations are generally among the first to arrive after a disaster, and they have extensive response networks that can facilitate effective disaster relief. Additionally, ARC Replica requires humanitarian organizations to develop contingency plans in coordination with governments, setting out in advance how they will use ARC payouts. This creates a coordinated mechanism between ARC member countries and their humanitarian partners that could improve overall payout execution.

ARC Replica is still in its infancy. The first humanitarian organizations to participate only recently finalized their first policies. Yet the Start Network, a consortium of humanitarian organizations, will soon receive the first ARC Replica payout, which it will use to support drought-affected communities in Senegal. CCRIF should pay close attention to ARC Replica, which may offer a model for improved payout delivery in the Caribbean region as well.