The sea around Lautoka City, Fiji's second-largest urban area, is rising 6 millimeters per year. The people of Taiperia Village, an informal settlement on the city's outskirts, are bracing themselves against more frequent flooding. Living on the edge of land and sea is increasingly perilous, as many Taiperia residents lack the means to adequately adapt to sea level rise. They try to protect themselves from coastal erosion by placing tires across the seashore to keep sand from being swept away by higher waves. But this piecemeal approach will not create lasting safety. Places like Taiperia need additional measures to adapt to climate change. 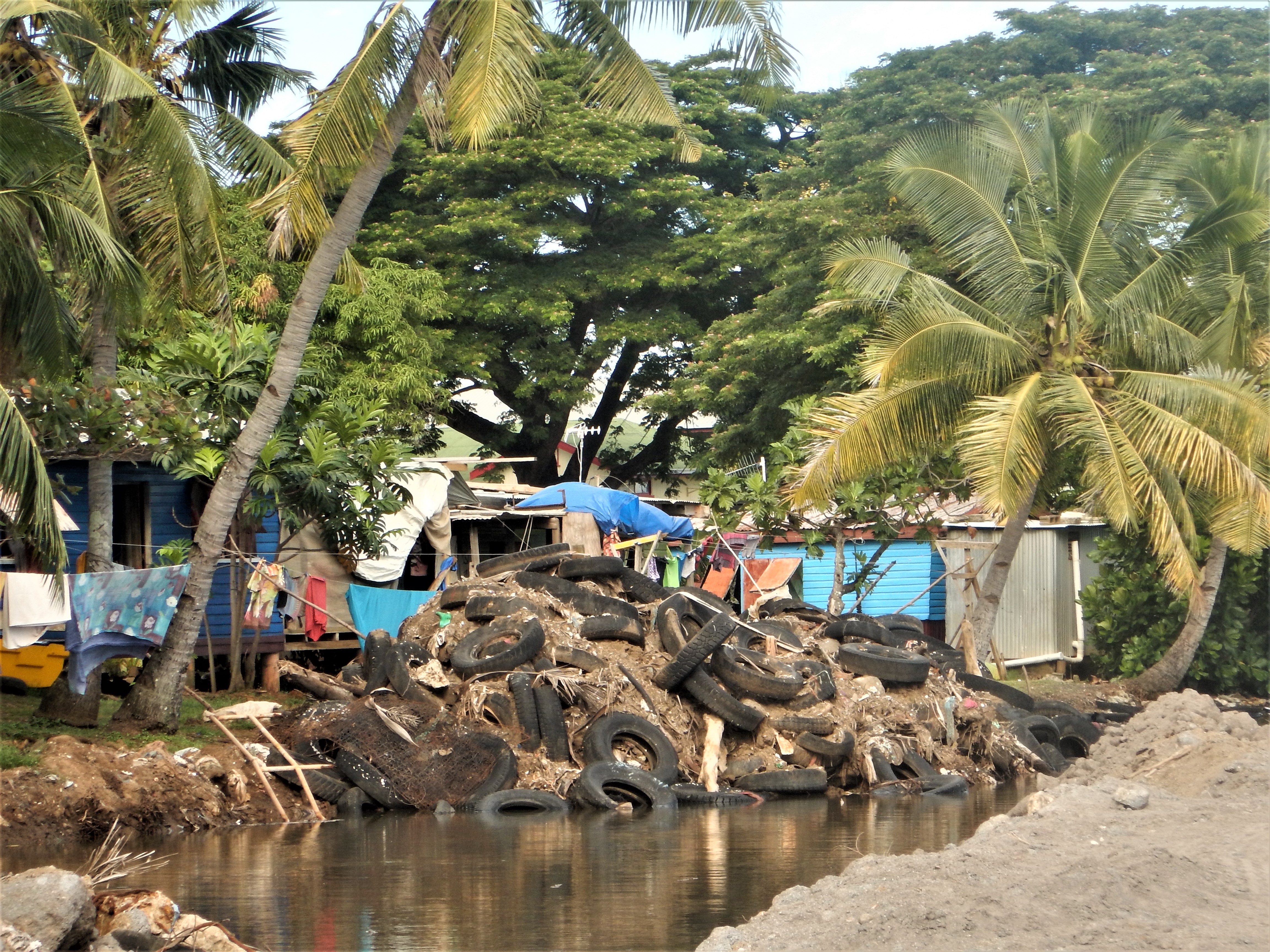 The Lautoka City Council is helping people in Taiperia protect and plant more mangroves, trees and shrubs that grow along tropical coasts. Mangrove forests mitigate some effects of sea level rise by reducing the height of waves that hit the shore by an average of 31 percent. These forests have the potential to reduce wind speed, which impacts coastal areas during cyclones. Mangroves also combat erosion by trapping sediments, allowing them to settle and form new soil. These benefits come at a relatively low cost for governments and communities. 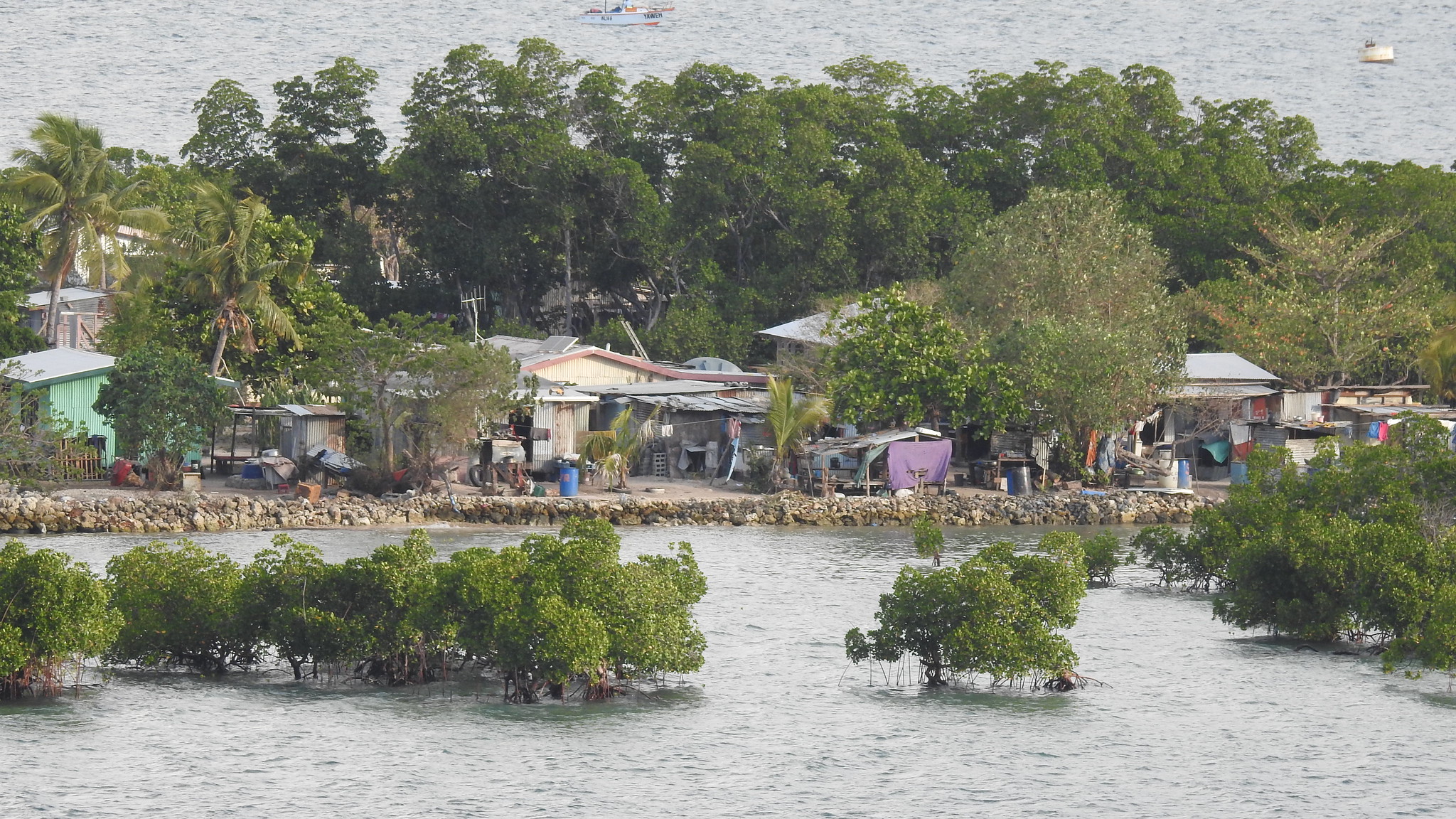 Namoli Village, another informal settlement near Taiperia, is using both natural and built infrastructure. The village has mangroves to the east and west and is building a sea wall in front of the settlement, again with help from the Lautoka City Council. The sea wall, which will stretch for 440 meters, is scheduled to be finished in 2019. Sea walls, typically large concrete structures, can stabilize eroding land and protect coastal roads and settlements from storm surges.

Investing in both types of infrastructure addresses some tradeoffs that come with each option. Although mangroves cost little, they can take decades to grow. Vulnerable areas may not have time to wait. Sea walls provide immediate protection, but they can be more expensive. By building a sea wall while also planting mangroves, Namoli Village will eventually reap the benefits of both solutions. 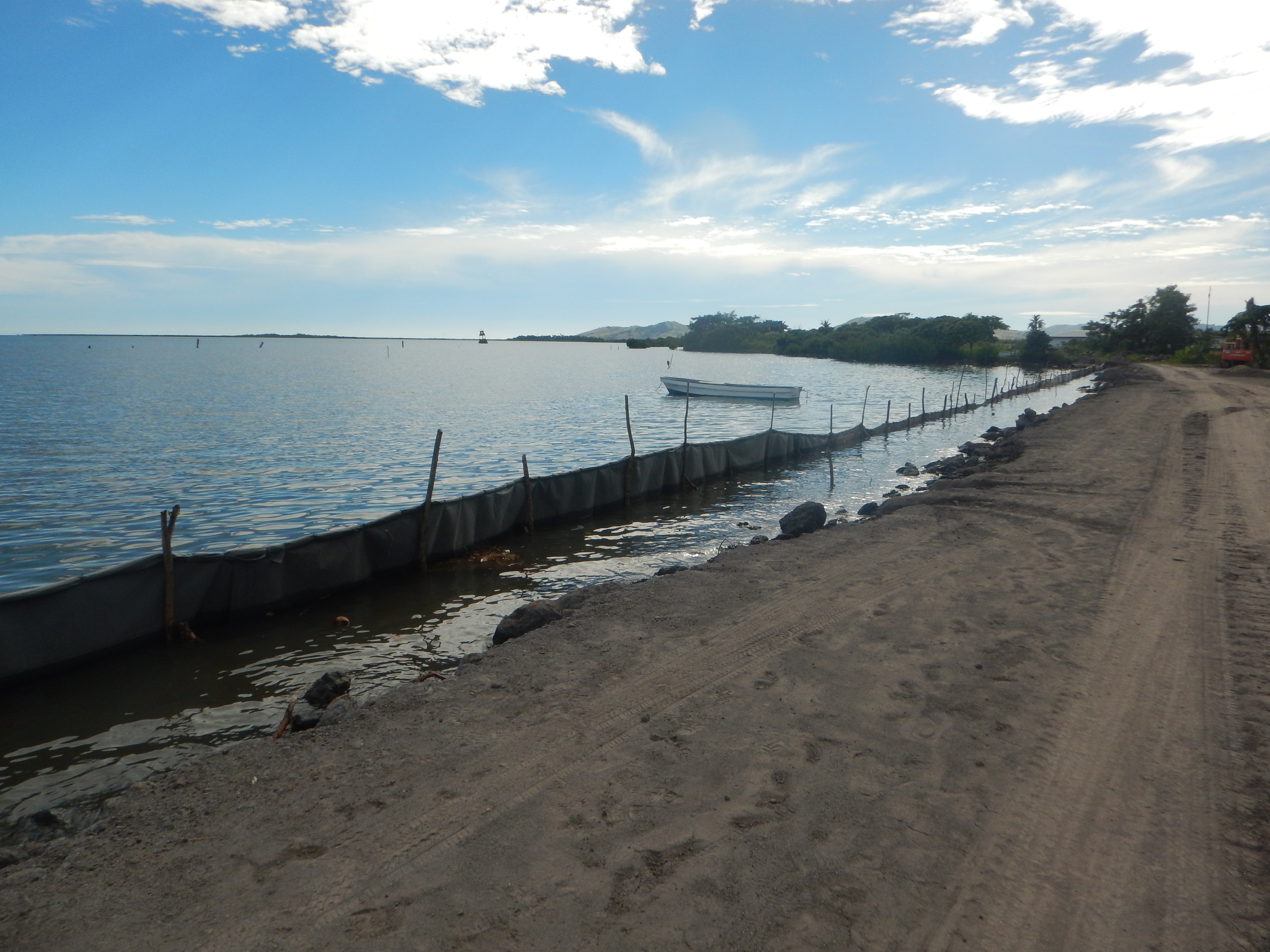 Namoli Village in Fiji is building a sea wall to protect against sea level rise. Photo by Namrata Chand/Lautoka City.

Sea level rise is not the only impact of climate change that concerns Fijians. They also worry about the growing threat of cyclones. In Lautoka City and other areas of the country, fragile and rusting tin roofs can't adequately protect its residents. In 2016, Cyclone Winston devastated Fiji, destroying hundreds of homes and cutting off power supply to 80 percent of the population. The storm also destroyed sugar cane crops, greatly disrupting Fijians' livelihoods and the economy.

One solution has been to build entirely new settlements for people vulnerable to cyclones and flooding. Koroipita Village is located inland, in a lush, hilly part of Lautoka. The neatly lined, blue and yellow houses dotting the settlement are still made of tin, but they are designed to better withstand high winds. The residents of Koroipita Village fared much better during Cyclone Winston than residents in settlements closer to the coast. Of the village's 230 houses, none suffered significant damage. 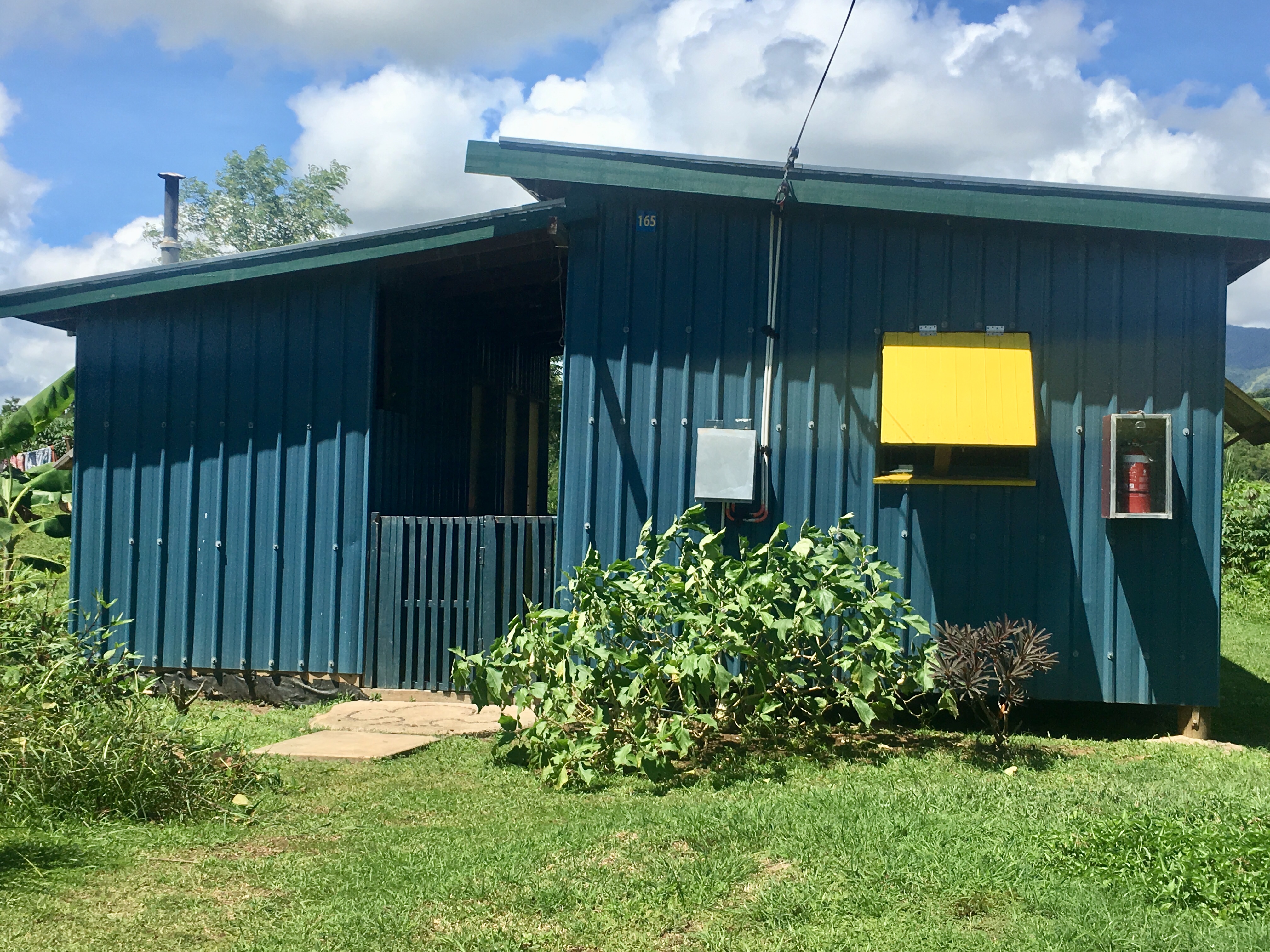 Flooding in Lautoka has been exacerbated not just by climate change, but by upstream logging, since trees and forested areas often absorb excess rain. Additionally, sewage running off from the city into coastal waters destroys coral reefs. Like mangroves, healthy reefs protect the coast from waves. 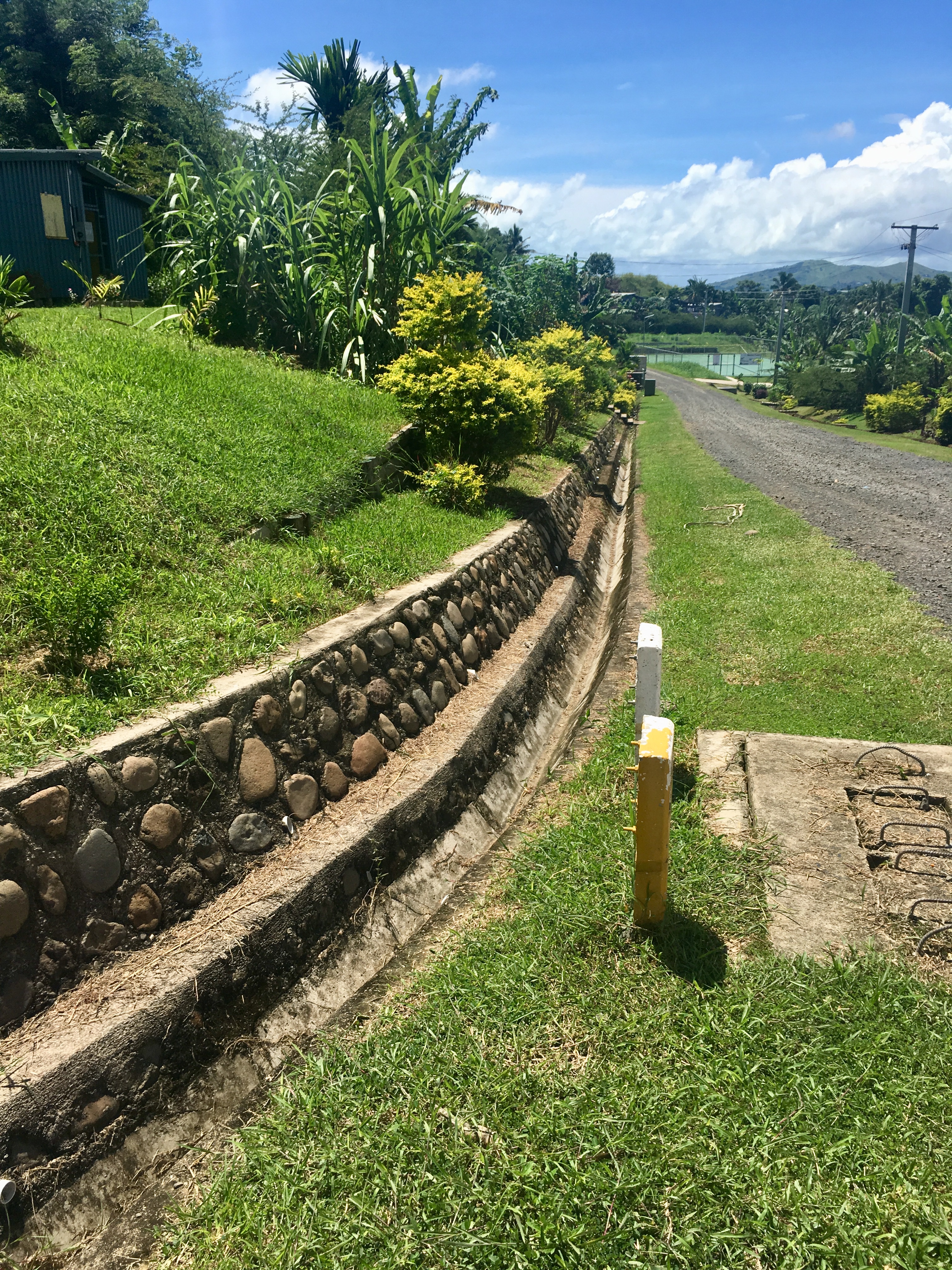 The drainage system in Koroipita Village, Fiji can channel excess water during heavy rains and floods. Photo by Moushumi Chaudhury/WRI.

Residents of Taiperia and Namoli villages, who live in lowland coastal areas, are the most affected due to the downward flow of water. These villages lack drainage and sewer systems. The Lautoka City Council is addressing waste management in the two communities by building latrines, and improving awareness about rubbish collection. The latrines directly improve people's health, and they also reinforce communities' resilience by protecting natural infrastructure like reefs from pollution. Reducing upstream deforestation would help the city even further, but the forests lie outside the city's jurisdiction. Protecting them requires help from beyond Lautoka City.

Lautoka City's efforts demonstrate that building resilience to climate change calls for communities to embrace both natural and built infrastructure. There may be communities where mangroves are enough, while others like Namoli Village need seawalls as well. Under other circumstances, improved buildings like those in Koroipita can save lives. There are even places where built infrastructure, such as sanitation facilities, will protect ecosystems that in turn protect people.

Choosing the right combination of adaptation solutions depends on a few factors. Together with residents, city governments need to consider which aspects of climate change — from sea level rise to storms — will impact them the most. Emerging guidance and tools can help adaptation and urban plannersdetermine whether natural or built solutions are appropriate. Cities also need to determine what funding sources are available, whether from federal governments, the private sector or international bodies like the Adaptation Fund. City governments also need to collaborate with residents to set clear rules mandating who is responsible for protecting ecosystems, and who should build and maintain manmade infrastructure. By looking to examples like Lautoka City, and considering local factors, cities can ensure that even their most vulnerable communities become more climate resilient.

Namrata Chand is the Resilience Officer for Lautoka City, Fiji.