This December, Poland is hosting the UN climate conference for the third time, after Poznan (2008) and Warsaw (2013). It was also President at COP 5, which was hosted in Germany in 1998.

Poland has presided over a number of COPs because of the regional rotation used by the United Nations and the interest that Poland has shown in playing this role when Eastern Europe’s turn has come.

The COP Presidency can play a critical role in shaping the character of the negotiations and helping to steer countries toward an outcome. In its last Presidency in 2013, Poland oversaw the birth of the intended nationally determined contributions (NDCs) that were foundational to the Paris Agreement. That COP also saw the creation of the Warsaw International Mechanism for Loss and Damage to consider actions when adaptation has reached its limits. In 2008, Poland presided over a COP that delivered important outcomes on adaptation, making it easier for countries to access finance through the Adaptation Fund.

This climate conference – COP24 – comes at a critical moment for setting the Paris Agreement in motion. Negotiators need to finalize the rules for the implementation of the Paris Agreement, send a collective signal on enhancing national commitments under Paris (NDCs) by 2020, and deliver progress on the issues around climate finance.

All of these are essential to effectively pursuing the Paris Agreement vision built around fulfilling and regularly strengthening countries’ commitments. As the birthplace of NDCs, Poland has an opportunity at Katowice to build a legacy by putting the implementation and enhancement of ambitious NDCs firmly on track.

Here’s what to know ahead of COP 24 about Poland’s record on climate, and how they can cement a legacy of leadership at COP 24.

A Mixed Record on Climate

Poland began a political transformation in 1989 that also involved a transition to a market economy. Since then, the economy has doubled in size, and emissions have gone down by a third—largely driven by the closure of inefficient and energy-intensive plants. (In the years right after 1989, many state-owned enterprises, including heavy industry, were closed, decreasing demand for energy.) 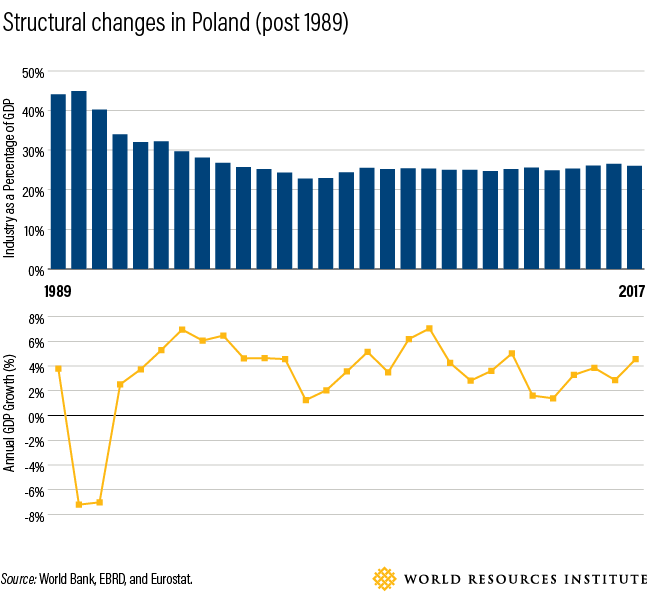 Poland joined the UNFCCC in 1992 and ratified the Kyoto Protocol in 1998. As noted, Poland’s transition to a market economy corresponded with a rapid decrease in greenhouse gas emissions. With no additional measures, Poland could not only fulfill but overachieve its Kyoto targets by a large margin (29 percent compared to 6 percent), helping the European Union to reduce emissions by 12 percent (exceeding their combined Kyoto target of 8 percent).

 However, these gains paint only part of the story. Coal provides 80 percent of the electricity in Poland, contributing to dangerous air quality. 33 of the 50 European cities with the worst air quality are in Poland. And while most European countries have embraced strong emissions reductions targets, Poland has held back in recent years. In 2015, Poland vetoed the so-called Doha amendment to the Kyoto Protocol, preventing the 28-member EU from ratifying the treaty as a bloc until the Protocol was ratified by Poland in March 2018.

Poland is also among the countries that is expected to miss its EU goal for reducing emissions from sectors other than electricity. This is mainly due to an increase in transport-sector emissions by over 60 percent between 2000 and 2017.

Katowice, the city hosting COP 24, is in Silesia, right in the middle of Poland’s coal country. This is no accident. Poland tops the list of biggest coal energy producers and exporters in EU28: a good deal of its economic activity and jobs are tied up in coal.

During the Katowice COP, the Polish government is spotlighting the need for a “just transition” that accounts for the socioeconomic impacts of the energy transformation. In a high-level session at the beginning of the COP, Poland’s COP Presidency released a “Solidarity and Just Transition Silesia Declaration,” which calls for including social requirements in energy transition policies, both to garner support for renewables and protect displaced workers.

Although the Polish government has suggested it views coal as deeply imbedded in Poland’s economy, it has also sent signals it would like to embark on a transition itself. A few weeks ahead of COP24, the Ministry of Energy published a draft Energy Policy for Poland 2040, by the Ministry of Energy, with updated projections beyond 2030–perhaps the beginnings of a clearer path toward the green transition. The report provides a summary of Poland’s vision for eventually transforming the energy sector. Coal will remain a significant part of the energy mix through 2030 and decline more rapidly by 2040, shifting to nuclear power, renewable energy and high-efficiency cogeneration.

The Polish Presidency has also prioritized green transport—it launched an electromobility partnership with the United Kingdom—and forest- and land-based carbon solutions. Poland’s forests have been a net carbon sink, sequestering an average 10 percent of Poland's total greenhouse gas emissions from 1990-2014.

How Poland Can Lead at COP24

Past COPs in Poland have successfully sustained momentum and global progress to address climate change. At this COP, their job will be to transition the process from designing rules for the new regime to accelerated implementation and ambition.

First, Poland must steer the Parties through sticky issues to adopt a robust rulebook. The rulebook—basically the guidelines for implementation of the Paris Agreement—has been under negotiation for three years.

Beyond the rulebook and critical to the success of the talks in Katowice, Poland must seize the legacy of NDCs and work with the world to put in place a process to enhance them. The birthplace of the NDC is the perfect place to call for higher ambition and a process for countries to review and update NDCs by 2020. The stakes have never been higher.