Finance is a core part of the Paris Agreement. It is key to enabling more ambitious action from all countries that the recent IPCC report warns is urgently needed. For developing countries, particularly the poorest and most vulnerable to climate impacts, finance is an urgent necessity to adapt to a warming world. Finance is also critical for developing countries to do their share in reducing the greenhouse gas emissions that cause climate change.

COP24 in Katowice, Poland, is the most important round of climate negotiations since the Paris COP three years ago, in part because governments are tasked with agreeing on the key guidelines necessary to implement the Paris Agreement. Three finance issues will occupy center stage in Katowice: the funds, the rules and the goals.

Climate-dedicated funds play an important role in getting finance to developing countries. Collectively, they provide targeted support for climate action using a range of instruments, often taking on more financial risk than other institutions.

At COP24, developed countries will need to send clear signals that they intend to scale up support for developing countries, including to funds that explicitly support the Paris Agreement. Specifically, richer countries need to commit to an ambitious replenishment of the Green Climate Fund, the biggest of the dedicated climate funds. Germany has led the way by announcing its intention to contribute €1.5 billion ($1.7 billion), a doubling of its first commitment to the Fund in 2014. Countries should also make pledges to the Adaptation Fund and Least Developed Countries Fund, which support vulnerable countries with much-needed adaption efforts. Finally, countries need to finalize technical details for the Adaptation Fund to serve the Paris Agreement.

Negotiators must ensure the Paris Agreement's implementation guidelines have clear provisions on how to track support for developing countries. Tracking must look backward and forward:

Currently, UN climate negotiations focus on public funding from developed to developing countries. However, one of the Paris Agreement's three long-term goals is to make all finance flows consistent with low-emissions and climate resilient development. So while tracking public funding is critically important and will continue to be so, it is only part of the picture. It would be like only looking at carbon dioxide emissions from developed countries; carbon dioxide is certainly a key driver of climate change, and developed countries are some of the largest contributors, but without looking at all greenhouse gases and all the major emitters, we won't successfully address the problem.

Therefore, negotiators must also ensure the Global Stocktake, the collective assessment of progress that will take place every five years, looks at progress in making all finance flows consistent with climate goals, and allows inputs from the wide variety of sources that have the necessary data. 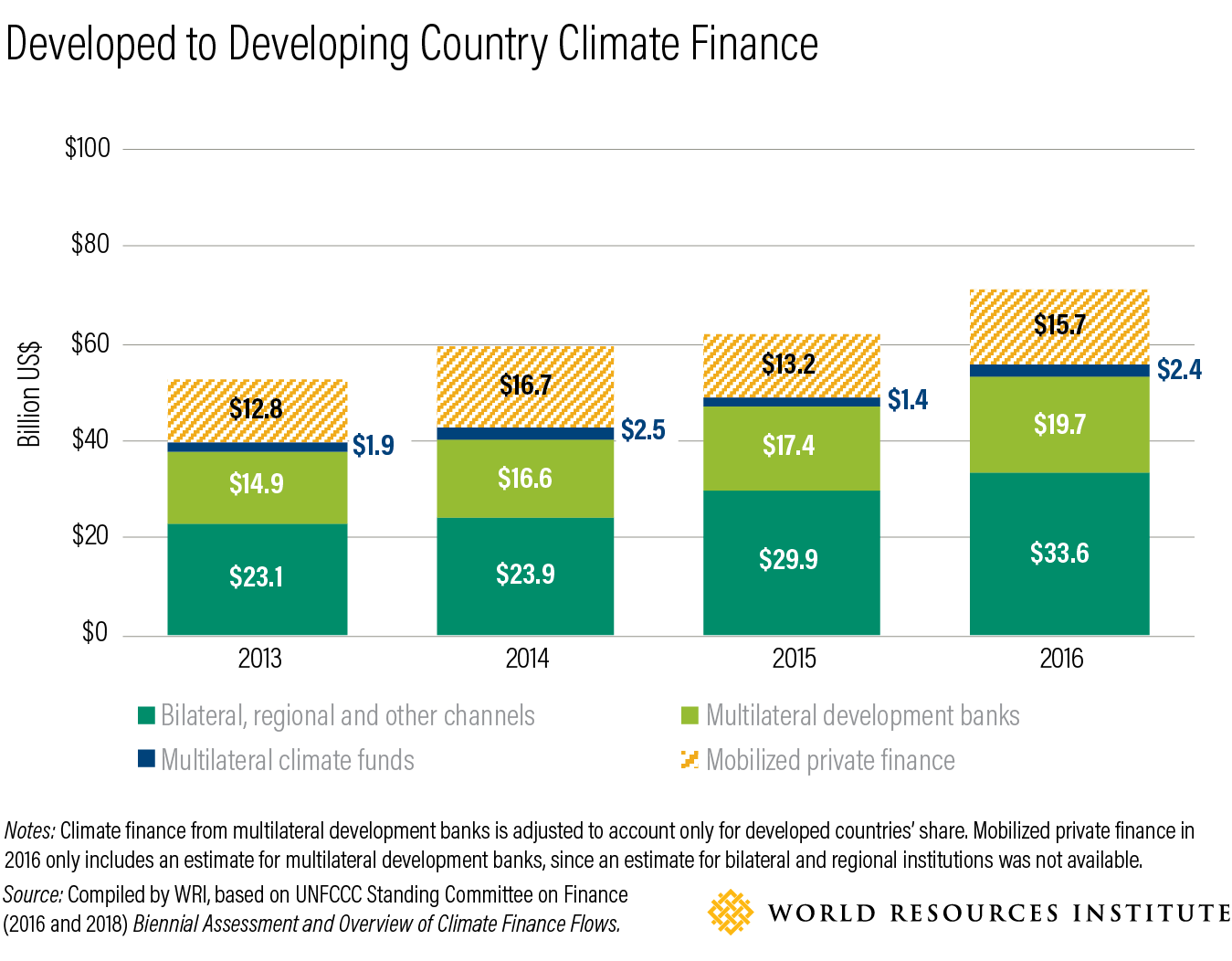 A Space to Bring It All Together

One final thing makes this an important COP for climate finance: the Biennial High-Level Ministerial Dialogue on Climate Finance will take place on December 10 to provide a space for ministers to assess the state of play on climate finance, identify further action needed and make new pledges and commitments, which can all help unlock progress in this critical round of negotiations.