The 2017 tree cover loss numbers are in, and they’re not looking good. Despite a decade of intensifying efforts to slow tropical deforestation, last year was the second-highest on record for tree cover loss, down just slightly from 2016. The tropics lost an area of forest the size of Vietnam in just the last two years.

In addition to harming biodiversity and infringing on the rights and livelihoods of local communities, forest destruction at this scale is a catastrophe for the global climate. New science shows that forests are even more important than we thought in curbing climate change. In addition to capturing and storing carbon, forests affect wind speed, rainfall patterns and atmospheric chemistry. In short, deforestation is making the world a hotter, drier place.

In light of these high stakes, those of us in “Forestry World” who dedicate our professional lives and personal passions to saving the rainforest need to pause and reflect:  If the indicators are going in the wrong direction, are we doing something wrong? 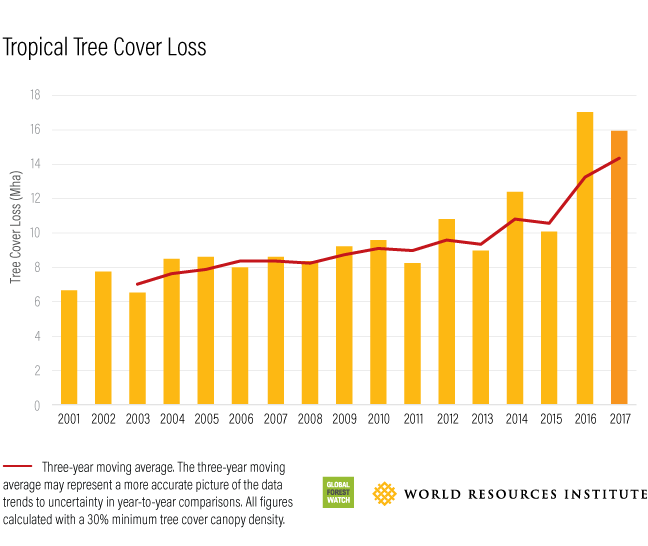 Brick on the Accelerator, Feather on the Brake

There’s no mystery on the main reason why tropical forests are disappearing. Despite the commitments of hundreds of companies to get deforestation out of their supply chains by 2020, vast areas continue to be cleared for soy, beef, palm oil and other commodities. In the cases of soy and palm oil, global demand is artificially inflated by policies that incentivize using food as a feedstock for biofuels.  And irresponsible logging continues to set forests on a path that leads to conversion to other land uses by opening up road access and increasing vulnerability to fires.

A large portion of that logging and forest conversion is illegal, according to the laws and regulations of producer countries, yet illegality and corruption remain endemic in many forest-rich countries. And Indigenous Peoples—whose presence is associated with maintaining forest cover, yet whose land rights are often unrecognized—continue to be murdered when they attempt to protect their forests.

The situation reminds me of the many movies that feature a runaway train: The throttle of global demand for commodities has been engaged, and the brakes of law enforcement and indigenous stewardship have been disabled. The only way to prevent a disastrous train wreck is for the hero (or heroine) to get into the conductor’s seat, remove the brick on the accelerator, and hit the emergency brakes.

We actually know how to do this. We have a large body of evidence that shows what works. Brazil, for example, reduced large-scale deforestation in the Amazon by 80 percent from 2004-2012 by increasing law enforcement, expanding protected areas, recognizing indigenous territories, and applying a suite of carrots and sticks to reign in uncontrolled conversion to agriculture, even while increasing production of cattle and soy. The problem is that our current efforts to apply these tools amount to a feather on the brake compared to the brick on the accelerator.

Forests Are Collateral Damage in Major Economic and Political Events

To a certain extent, the bad news in the 2017 tree cover loss numbers reflects collateral damage from unrelated political and economic developments in forested countries. Colombia’s 46 percent increase in tree cover loss is likely linked to its recent conflict resolution, which opened up to development large areas of forest previously controlled by armed rebel forces. While the doubling of Brazil’s tree cover loss from 2015 to 2017 was in part due to unprecedented forest fires in the Amazon, the uptick is likely also attributable to a relaxation of law enforcement efforts in the midst of the country’s ongoing political turmoil and fiscal crisis. Indeed, it is striking how many of the world’s tropical forested countries have either experienced a recent change in government (Liberia, Peru), are currently in political crises (Brazil, Democratic Republic of Congo), are in the midst of elections (Colombia), or will face elections in the near future (Indonesia).

We Know the Solutions for Stopping Deforestation

This context hammers home what we already knew: No amount of international concern about tropical forests will make a difference unless it meaningfully connects to domestic constituencies in forested countries, and changes the incentives that drive deforestation.

One of the key strategies for aligning national priorities with anti-deforestation actions started a decade ago. Reducing Emissions from Deforestation and forest Degradation and enhancing forest carbon stocks, or REDD+, is a framework endorsed by the Paris Agreement on climate change that encourages rich countries to pay developing countries for limiting deforestation and forest degradation. Unfortunately, the volume of REDD+ funding on offer (about a billion dollars per year) remains trivial compared to the $777 billion provided since 2010 for financing agriculture and other land sector investments that put forests at risk.  This is surely one reason why domestic coalitions for change in countries participating in REDD+ have been unable to overcome competing coalitions for deforestation-as-usual.

While the prospects for immediate increases in REDD+ finance remain bleak, other strategies to strengthen domestic constituencies for reform show promise.

Brazil pioneered a system of monitoring deforestation by satellite. The public disclosure of that data was key to generating political will and the information necessary for fighting illegal clearing. Now, remote-sensing tools are helping communities and law enforcement officials around the world to detect and respond to illegal deforestation in near-real time. For example, Peru’s Ministry of Environment distributes weekly deforestation alerts to more than 800 government agencies, companies and civil society groups, which led to several prosecutions in 2017.

International cooperation on law enforcement can also create domestic incentives for forestry sector reform. In late 2016, Indonesia became the first country to receive a license to export to the European Union timber verified as legally harvested. By ensuring that its timber was harvested legally, Indonesia secured access for its forest products in a lucrative international market.

Indonesia has also witnessed the application of a new generation of transparency tools to fight deforestation. For example, in 2017, civil society groups used publicly available databases on corporate finance and governance to uncover monopolistic practices and non-compliance with plantation regulations among 15 companies in the palm oil sector. They then shared their findings with Indonesia’s Corruption Eradication Commission and other government authorities in a position to respond with policy or legal action.

Finally, there’s increased action at the sub-national level. Dozens of governors and district heads in forest-rich jurisdictions around the world have committed to low-emissions development. For example, the Brazilian State of Mato Grosso launched a “Produce, Conserve, and Include” strategy to end illegal deforestation while promoting sustainable agriculture. Some of the companies that have made anti-deforestation commitments are considering preferential sourcing of commodities from such jurisdictions as a way of both reducing risk and encouraging continued progress toward better land-use management.

Those of Us in “Forestry World” Can’t Do It Alone

There are clearly solutions out there, but they need to be scaled up and expanded to forests throughout the world. This week, more than 500 citizens of Forestry World are gathering at the Oslo Tropical Forests Forum to reflect on the last 10 years of efforts to protect forests, and chart a way forward. But we can’t do it alone.

Preliminary analysis suggests that a significant chunk of forest loss in 2017 was due to “natural” disasters of the sort expected to become more frequent and severe with climate change. Hurricane Maria flattened forests in the Caribbean, and fires burned large areas of Brazil and Indonesia over the last few years. While degradation of forests through logging and fragmentation by roads renders them less resilient to extreme weather events, there is a limit to which forest-specific interventions can be effective in the face of a changing climate. While stabilizing the global climate is contingent on saving the world’s forests, saving the forests is also contingent on stabilizing the global climate.

In addition to doubling down on the proven strategies for reducing deforestation (and allocating a fair share of climate finance toward those efforts), all countries need to up their game on climate action.

Nature is telling us this is urgent. We know what to do. Now we just have to do it.