This article originally appeared on CityMetric.

Rose Molokoane picked up the microphone at the World Urban Forum in Kuala Lumpur in February, and challenged the room full of policymakers, practitioners and researchers.

“I’ve been a part of every World Urban Forum, and government is always talking about needing to work together better,” said the deputy president of the Shack/Slum Dwellers International. The audience, many of them from government themselves, sat up a little straighter.

We have heard leaders talk about trust, about integration, about inclusion, she continued. “Well, we don’t know who they’re talking about because they’re not talking to us.”

Molokoane is one of 881 million people living in slums, without access to basic services like water, sanitation and housing. If current patterns of urban growth continue, we project that the number of slum dwellers will reach 1.2 billion by 2050.

This is not the only worrying trend in cities. More than 70 percent of carbon emissions from final energy use can be attributed to urban areas. As urban populations and economies grow, greenhouse gas emissions are rising steadily.

Cities are also becoming more sprawling: the amount of land being used for urban purposes is expected to triple between 2000 and 2050. This is leading to the loss of natural ecosystems and productive agricultural land. Sprawling cities are also less energy efficient, as residents have to spend more time travelling to reach jobs, services and amenities.

Molokoane and other activists were involved in drafting the Sustainable Development Goals, Paris Agreement and New Urban Agenda. These global agreements envision a more equitable and sustainable world.

But cities are not on track to achieve these goals. The number of people living in urban poverty is increasing, as are cities’ environmental footprint. There is therefore a need for transformational change to "bend the curve" towards greener, more inclusive urban development. 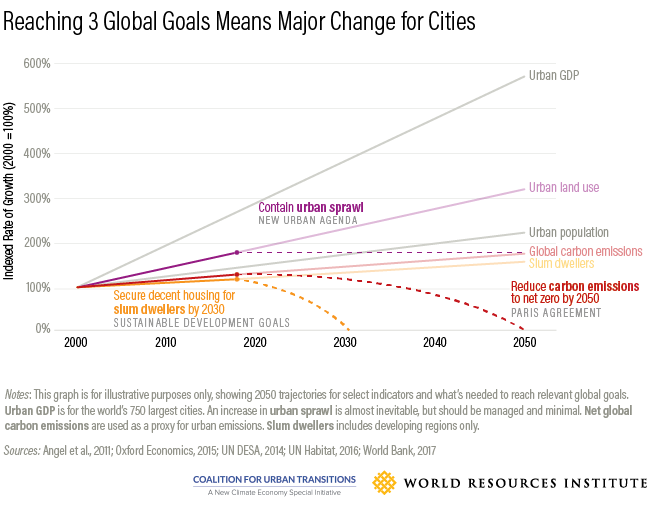 The Sustainable Development Goals commit to ending poverty in all its forms by 2030. To realise this aspiration, governments need to provide under-served urban residents with decent housing, safe drinking water, reliable sanitation and clean energy. Ultimately, the number of slum dwellers should be declining by 50-60m people a year even as urban populations rise.

The Paris Agreement commits to eliminate net global emissions by 2050. To decarbonize cities, governments will need to mobilise large-scale investment in renewable energy, public transport, energy-efficient buildings and solid waste management. Much of this investment will be needed in urban areas, which need to reduce emissions by 4-5 per cent every year.

The way that urban land is used will be key to achieving all of these global agreements. In more compact, connected cities, people have better access to jobs, services and amenities. They also don’t have to travel as far, which reduces transport emissions that cause climate change and affect air quality. Cities therefore need to avoid sprawl and pursue more efficient, inclusive urban forms.

From Agenda to Action

The Sustainable Development Goals and Paris Agreement were signed in 2015; the New Urban Agenda, in 2016. Now is the time to move from setting goals to taking action. But it’s important to be clear-eyed about the radical change needed to deliver these targets.

‘Bending the curve’ will require more than incremental policy change or individual infrastructure investments. There is a need to shape urban growth in ways that meet the needs of city dwellers, reduce resource consumption and sustain economic development.

Cities are where these changes must happen – but cities can’t do it alone. National governments need to create enabling frameworks that coordinate all the different actors in cities. Private finance will be key to meeting the shortfall in infrastructure investment.

And communities like Molokoane’s must be involved in planning and implementation. After all, it is residents themselves who best know their city and must live with the consequences after all the conferences end.