As The Guardian newspaper recently reported, chopping down trees in the Amazon rainforest decreases water supply to distant Sao Paulo, Brazil's most populous city. Large-scale deforestation disrupts the water cycle and can affect weather patterns thousands of miles away. However, the Amazon is not the only forest sustaining the water resources of Sao Paulo. The Atlantic Forest, which stretches across southeast and northeast Brazil and through the watersheds that supply drinking water to Sao Paulo, Rio de Janeiro, Vitoria and several other cities, plays a crucial role in stabilizing local climates, increasing water flow in dry periods, purifying water and creating a buffer against floods.

Although the Atlantic Forest is not as famous as the Amazon, it is similarly a hotspot for plant and animal life, and has an even more striking history of deforestation. While it historically covered an area larger than Peru, deforestation has claimed all but 12 percent of these forests. Its loss has degraded important water sources for Brazilian metropolitan regions that are home to more than 63 million people. 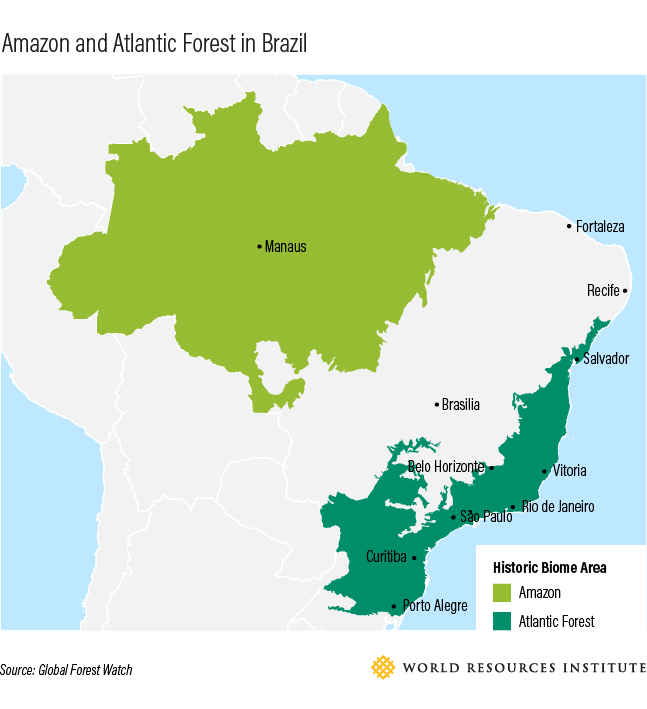 Restoring this forest can help these regions reap the benefits provided by natural infrastructure:

SABESP (Sao Paulo's water company) and other water utilities in southeast Brazil unfortunately have limited control over the land use decisions of the Amazon, which is hundreds of miles away. But they can help protect and restore the nearby Atlantic Forest as a proactive water management strategy. SABESP has led the way by conserving more than 45 thousand hectares (over 111 thousand acres) of forest on its own land holdings. However, the need for restoration to recover this forest extends far beyond water companies' own fence lines.

Take, for example, the Cantareira Water Supply System— a watershed located in the Atlantic Forest range, which provides about half the water supply for the Sao Paulo Metropolitan Area. This watershed possesses only 21.5% of its original forest cover, and in general, native forest restoration efforts have been insufficient. SABESP has reforested almost 1200 hectares of forest adjacent to their reservoirs in the Cantareira, but there are most certainly even more water benefits to be gained by reforesting steep slopes, degraded pastures, or other key ecological zones throughout the 228,000-hectare area. There is a huge opportunity to bring back forests here.

Studying the Forest to Save It

While we know that the Atlantic Forest generally provides water benefits that can be harnessed to secure water supply, we need better information to help pinpoint when, where and how much Atlantic Forest to restore to provide the optimal results for water companies. Without this information, water companies may be hesitant to support more ambitious forest restoration efforts.

To address these questions, WRI, The Nature Conservancy, International Union for the Conservation of Nature, Natural Capital Project, Instituto Bioatlantica, Boticario Foundation and FEMSA Foundation have partnered in the cities of Sao Paulo, Rio de Janeiro and Vitoria to examine the business case for water companies to invest in strategic forest restoration efforts. This project, due to publish results next year, will provide guidance to water companies and watershed committees on why, where, and how much to invest in forest restoration as natural infrastructure.

One thing is already certain: until water utilities in southeast Brazil address the need for massive forest restoration in their backyards, they're missing a huge opportunity to improve their water security.